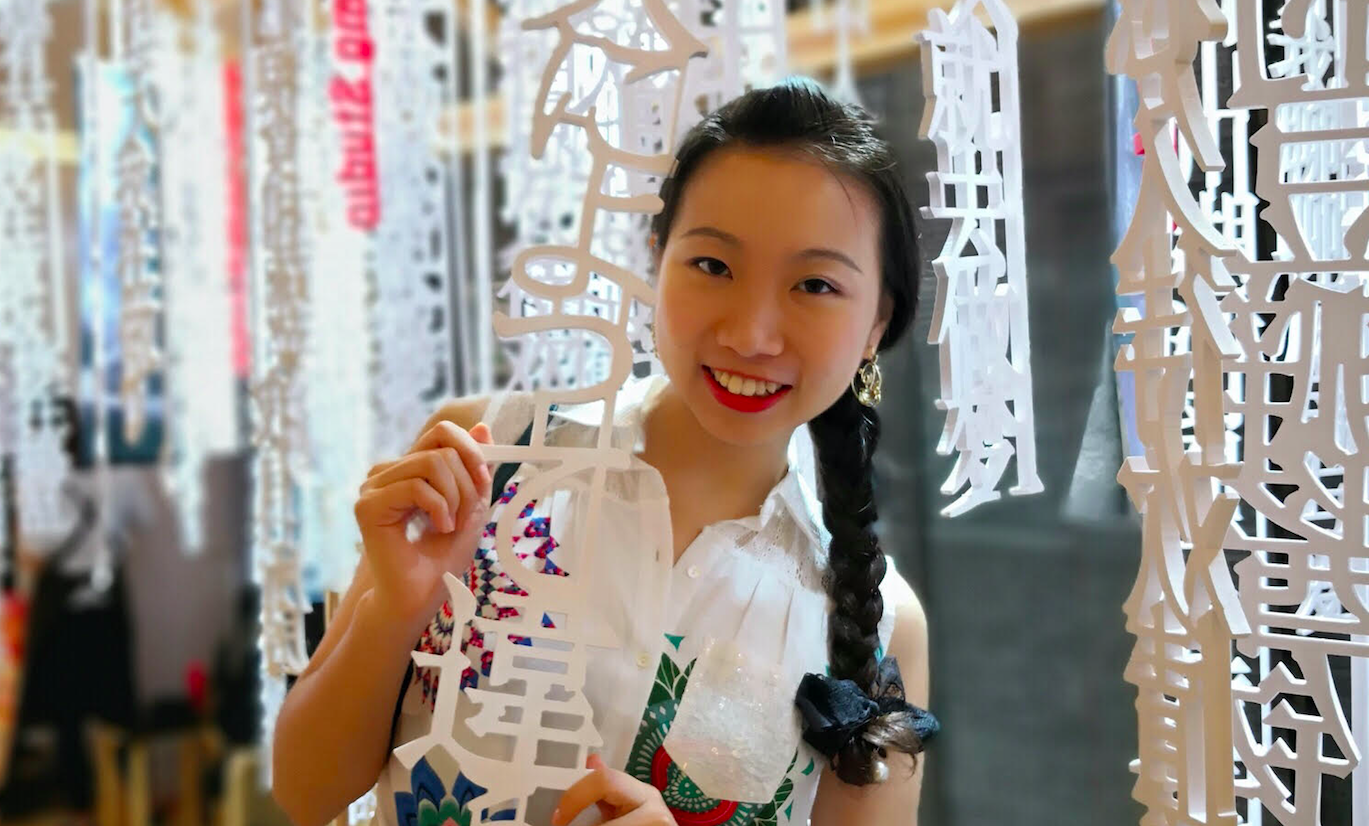 Shirley Zhao remembers the first English article she ever read at NYU Shanghai, a piece  assigned for her “Global Perspectives on Society” course. The essay by philosopher Anthony Appiah on cosmopolitanism was 13 pages, making it the longest English work she’d ever read.

“It was the first time in my life that I [had] ever encountered an English article that [had] more than 200 words,” says Zhao, a native of Chengdu, Sichuan Province.

To tackle the assignment, Zhao divided the article into two-page chunks, taking a week to parse through it and look up words she didn’t know in the dictionary. Then, she read the article again. 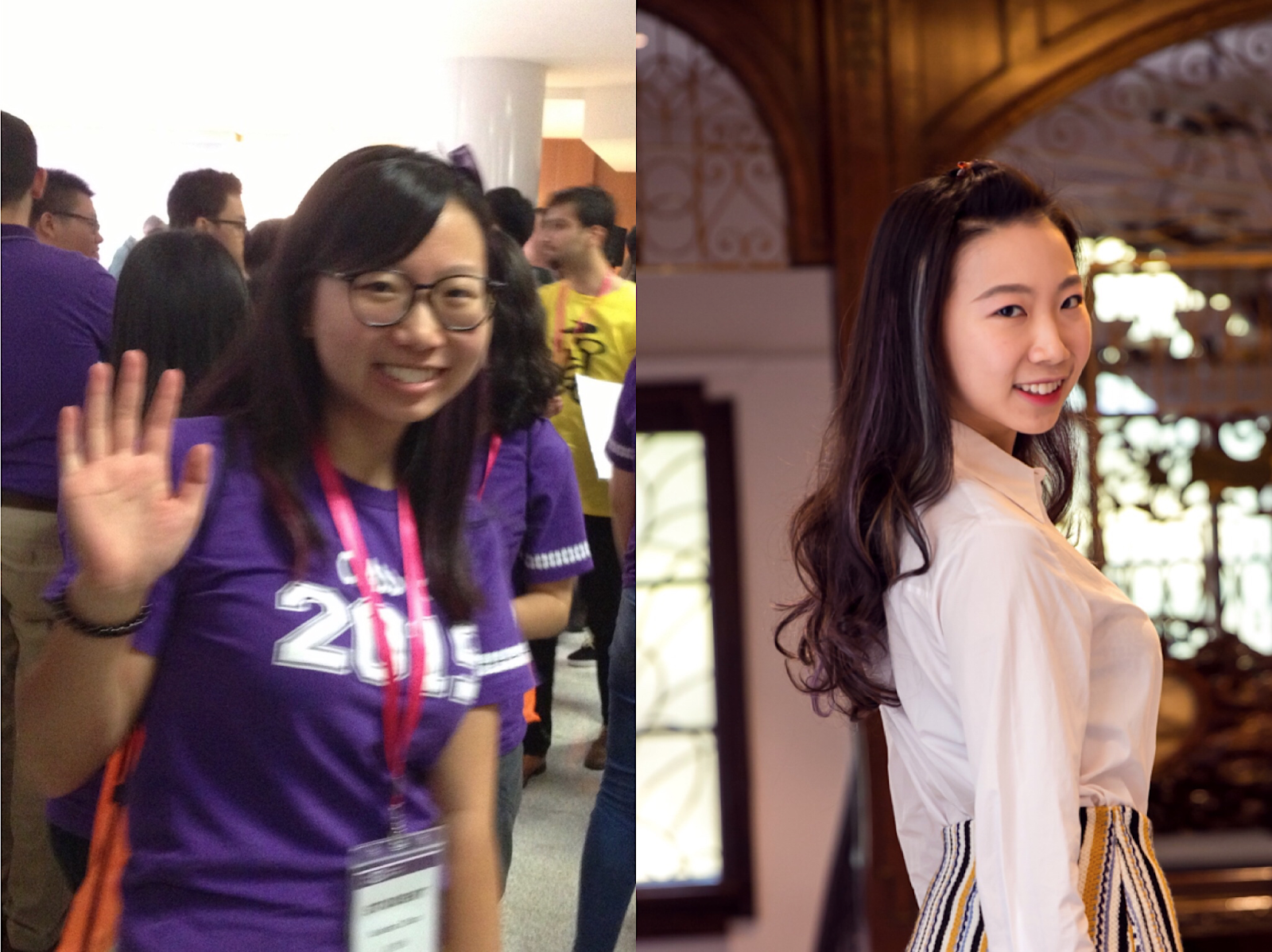 Zhao in her Freshman year (left) and Senior year (right).

This is how Zhao said she completed all her GPS course assignments, reading every article twice and stopping to summarize each paragraph to ensure she understood. The process was tedious, but necessary at the time. Even with Chinese translations available for many of the texts, Zhao said she refused to use them, forcing herself to read the English texts.

Slowly throughout the semester, the language stopped looking as challenging, even as she sat with her dictionary open while writing her papers. “I kept encountering new vocabulary every day, but it stopped sounding or appearing intimidating to me.”

It was during this first semester that Zhao says she felt a shift in her attitude toward academics, encouraged by teachers for the first time to focus not on testing, but on developing her own perspectives. When she discovered she could earn high grades for writing about her own opinions and thoughts, she said it convinced her that  NYU Shanghai was the right place for her.

“Every time I spoke in class, every time I wrote something, I didn’t feel like I was trying to fit into a certain model to get a good grade,” she says. “I was always simply putting forward what I thought.” Zhao will use her fellowship award to pursue a Master’s in East Asian Studies, with a focus on Sino-Japanese relations, which has been her focus throughout her time at NYU Shanghai.  A Global China Studies major, Zhao says she wanted to add another Asian perspective to her studies, and Japan was an “intuitive” choice given the two countries’ long history of tension and conflict. Her grandmother was also raised in Nanjing, the site of the Japanese massacre against the Chinese in 1937, making the topic even more personal.

Zhao spent a year at Waseda University in Tokyo, Japan to help fully immerse herself in the Japanese perspective. She formed close bonds with friends and mentors, an experience that challenged the preconceived negative connotations of Japan she had formed while growing up. 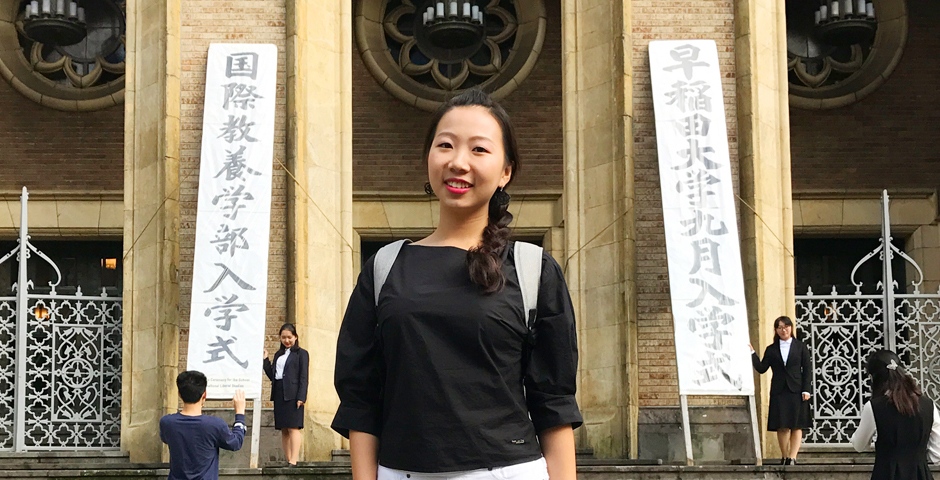 Shirley at Waseda University in Tokyo

“Because of the historical controversy, I really held a hostile view against Japan for a long period of time,” she said. “During my interactions with the people around me, they turned out to be really nice people. Not Japanese or Chinese, but just people. This kind of experience made me see the gaps between my preconception of Japan and the actual experience I was having with the people there. Oftentimes the political or nationalistic narrative overshadows the actual interactions people can have on a personal level. If I can have this kind of experience, then so can other people.”

To accept her spot at Stanford, Zhao had to turn down five competing offers— from Harvard, Columbia, Oxford, Cambridge, and the University of Tokyo. History professor and director of the Center for Global Asia Tansen Sen, who taught Zhao in several of her Global China Studies courses, says Zhao stood out to him as a strong candidate for the graduate programs because of her independence and sharp intellect.

Sen says he’s been impressed by her decisions, most notably her decision to major in Global China Studies, a unique choice among Chinese students, and to study in Japan rather than at an NYU study away campus.

When Zhao got the news about Stanford, her first call was to her mother.

“My family, they’ve been really supportive throughout the process of my development and they really encouraged me to become a pioneer to myself,” she says. “My parents see the potential in me and the belief that as long as it’s something I love, [they have] the belief that I could do it well. All the way from when I was really little, they’ve been standing behind me and have been supportive of my choices and decisions.”

Outside of class, one of Zhao’s biggest passions at NYU Shanghai has been dance. A dancer since she was a child, she served as the vice president of the Xiao Long Shakers dance club. While she says she’s always been excited by dance, at NYU Shanghai she said she loved that it’s served as a new way to bridge cultures between international students. During her freshman year, she helped throw the school’s first dance celebration for the Indian new year celebration Diwali.

“I love when I can throw my thoughts away and just focus on my body and the movement,” she says. “It was not just about dance, but the way people, even though we’re not Indian, we can celebrate together. How here at NYU Shanghai, by doing what I love, I really get to get together with my peers to really explore all cultures.”

Professor Aly Rose, who taught Zhao in “Contemporary Dance” and “Dance for Camera” courses, said Zhao often helped other students learn the tougher choreography, without making them feel singled out.

“She has a very gentle style of leadership, I hope the future has more of that,” Rose said. “There’s a synergistic effect you can feel when you’re with Shirley.”

Zhao said helping others comes naturally to her. Leadership is a core value that she said comes from her mom, who from a young age instilled in her the importance of not only academic success but empathy and social responsibility. It’s something she said they still talk about today, including during her mom’s most recent visit to Shanghai.

“I define leadership more as something about care,” she said. “I take the initiative to lead because I care, I care about our community.”

Global China Studies professor Leksa Lee, who has served as Zhao’s capstone advisor, said one of the qualities that most stands out to her about Zhao is her empathy and modesty.

A budding historian, Lee said Zhao thrives at engaging with people and helping them to share their personal stories, something that shines in her capstone, which is an analysis of the historical connotations of the Nanjing Massacre Memorial Hall and its impact on high school viewers.

Lee said she hopes other students appreciate and emulate the dedication and care that Zhao has poured into everything she’s done over the last four years.

“She knows that success is really all about getting started, sticking with it, and supporting the people around you.”