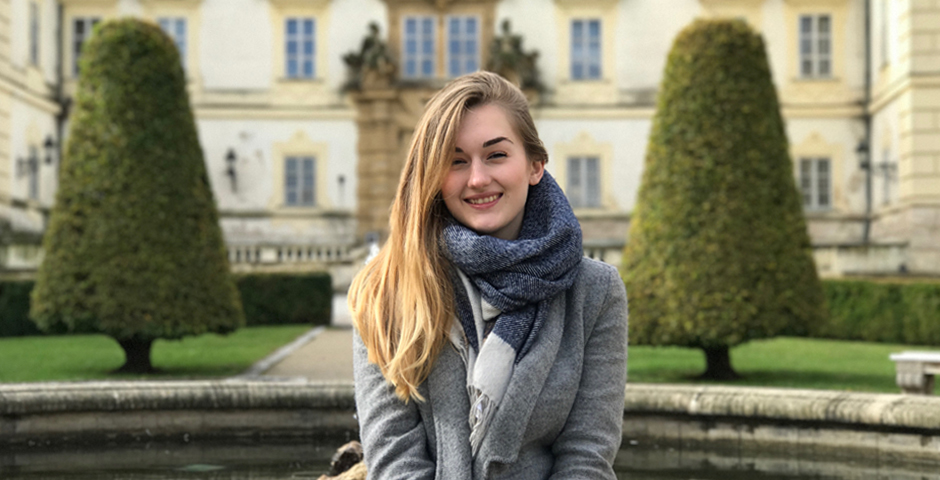 Back home in Soroca, Moldova, Victoria Rusu ’19 always knew that she was different. Some part of her always chafed against the routine of life in her small city, where she had had the same classmates since first grade, and where she had little choice in what classes she took.

“I liked using languages as a way to open new doors,” recalls Rusu, who had already become fluent in Romanian, Russian, English, and French by the time she left high school. “I just knew that I wanted to do something different. I wanted to gain more experience, and I wanted to become more open-minded than my country would have been able to give me the opportunity to be.”

When a high school classmate in the year ahead of her (Marcela Railean ’18) was accepted to NYU Shanghai, something clicked for Rusu. “I got really excited looking at what my friend was going through at NYU Shanghai - all the opportunities, that she got to explore so much, that there were endless possibilities in terms of growth for your future career,” Rusu remembers. But what she found most intriguing was the chance to study on a very diverse campus where she could connect with classmates and faculty from all over the world.

Rusu says she didn’t expect it to be easy to convince her family that studying at a brand-new Sino-American university in China was a good idea. After all, her mother had planned for her to study medicine in Moldova and then work in the region as a doctor. But it didn’t take long for her family to agree.

“I convinced them that I was given this opportunity, and it made me want to follow my dreams,” Rusu explains. “Now they’re really happy. Every time I talk to them about what I’m doing or something new that that I’m achieving, they’re like, ‘We’re so glad that you chose to go where you went.’”

Rusu sightseeing with her cousins in the Moldovan capital, Chisinau.

When she left home, Rusu brought along a saying of her mother’s, something that Rusu says has served as her personal philosophy throughout her time at NYU Shanghai.

Rusu says she immediately put her philosophy to work in the freshman core curriculum class Global Perspectives on Society, a course she credits with teaching her how to have the open dialogues that she sought at NYU Shanghai.

“Sometimes I think it would be so nice if everyone everywhere in the world could have a GPS class,” Rusu says. “What I learned there really opened my mind – it gave me the chance to accept myself and the chance to see that it’s really ok to be accepting of others.”

Rusu got an early start in community-building activities on campus. As a sophomore, she helped write, choreograph and perform the Fall 2016 NYU Shanghai “Reality Show,” part of the NYU Shanghai orientation designed to give freshmen a humorous and poignant introduction to campus life. She has also served as a student ambassador at every Admitted Student Weekend since she arrived at NYU Shanghai in the 2015-2016 school year.

“I really love this kind of volunteer work, because it lets me assure students that this is an environment that helps you feel like you’re home, not left out or on the outside. Even though you are coming to a new place, you are not going to get lost,” Rusu says.

Rusu speaks at the opening ceremony for NYU Shanghai’s “The Box” wall, an interactive video project to recognize donors to the campus. Rusu served as the president of the student committee that carried out the project.

While working as an intern in the Office of Student Life, Rusu helped create the Find Yourself in Shanghai event series, which made it easy for students to explore the city and make Shanghai their own.

“We did a biking day on Hengsha Island…Then we took students to the ice-skating rink…Then we organized a flea market and brought sugar painting to the student life space in [the Academic Building],” Rusu says. “We wanted the student body to get more involved with the culture here, to get to know more about Shanghai and to find themselves here.”

Rusu also took advantage of Shanghai’s many business opportunities, finding two internships in the city. “At the private equity firm where I interned one summer, I was the only foreign person there,” says Rusu. “That was a one-of-a-kind experience that I would never have had anywhere else.”

NYU Shanghai’s Study Away requirement was an important draw for Rusu, who chose to study at NYU Prague for a semester. While there, she started studying a sixth language (German), and traveled with classmates to several European countries she had never visited before. The campus’s challenging course offerings in Rusu’s major, Business and Marketing, were also a welcome surprise.

Rusu in Prague with NYU Prague classmates in 2017.

Although business was not a major Rusu says she had envisioned herself pursuing, she was deeply inspired by her business and marketing professors’ passion for pushing students to engage with the world outside the classroom.

Professor of Practice in Management Heini Shi’s course Doing Business With China showed Rusu just how much her experience at NYU Shanghai had helped her grow and deepen her understanding of the wider world. “A passionate professor like her really facilitates conversation, so everyone got to voice their opinion. Because we’re so diverse, people got to share experiences and business insights from so many other countries,” Rusu recalls. “It was the culmination point of, ‘Why am I in China and why am I studying business?’”

Hoping to continue the journey of exploration that she began at NYU Shanghai, Rusu applied to graduate trainee programs with companies in Asia, Europe, and the United States. Soon, she will head to Dubai to work with global property development company Emaar. Rusu says she is ready to explore a new part of the world.

“Everywhere we go, I feel like the NYU campuses really put an emphasis on immersing yourself in the new culture and the diversity of people there,” Rusu asserts. “So I don’t think I’m going to have a problem with moving somewhere else or starting a job in a completely different place. I’m so much more adaptable now.”

But she says China will always hold a special place in her heart, and she would love to spend more time in the country, especially working in its “progressive” marketplace.

“Coming to NYU Shanghai really made me fall in love with China, and with the city and the culture, and I want to be a part of it. I gained something incredibly beautiful from this experience, in every way.”

Ultimately, no matter where life may take her, Rusu says, “I want to be a part of something that can shape the world that we are in, even if it’s not radically. I just want to be able to contribute to it in some way.”