Anthony Comeau ’19 first started thinking about studying in China in middle school, when a family friend - a first generation Chinese immigrant who had moved to the US in the 1980s - started teaching him Mandarin Chinese.

“He told me, ‘The best way to learn Chinese is to go to China!’” says Comeau, a native of Portsmouth, New Hampshire in the United States, “so I applied to NYU and found out they had NYU Shanghai.” After he got in, Comeau says the decision to enroll was easy. “At  Admitted Students Weekend, I liked the idea of the school, the people I met there, and the vision of intercultural dialogue. NYU Shanghai was the only school that I thought if I didn't go there, I'd be missing out.” 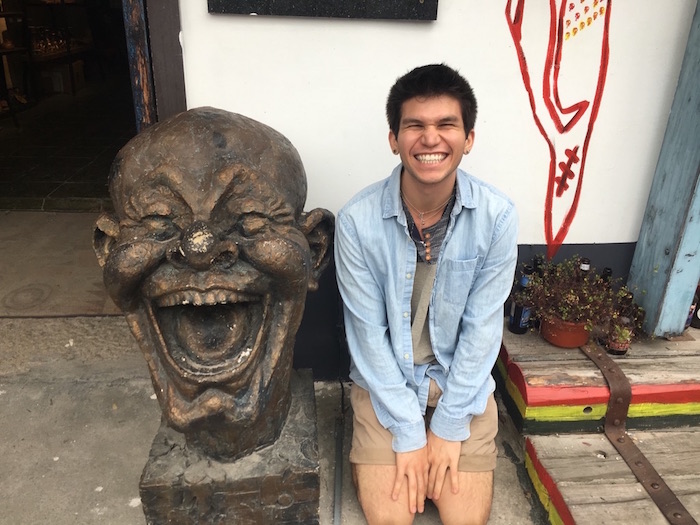 Posing in front of a sculpture in Zhujiajiao (朱家角), a water town outside of Shanghai, senior year, October 2018

Comeau says he wanted to understand China better, and was interested in learning about how history influences the world’s social issues. “I think being here physically in Shanghai and seeing the consequences of the policies you study is different,” he says.

Having access to more than just a “default American perspective” in class was something Comeau, who will graduate in May with a degree in Social Sciences and a minor in Chinese, appreciated about his education at NYU Shanghai. “People here just tend to care about the world as a whole, rather than just their own country's perspective,” he says.

On campus, Comeau has worked actively to facilitate dialogues on the issues he is interested in, including international law and the LGBTQ+ community.

As a sophomore, he started ‘The International Criminal Court Student Network,’ a group that held debates centered around topics of international criminal law, with a focus on ending war crimes and genocide. He also helped run Queer and Ally Society club.

In one of his favorite classes, Capitalism, Socialism, Communism: Theory and Practice, Comeau admired Associate Professor of Practice in Political Science Almaz Zelleke’s teaching style. “Those three terms are very vague, and people throw them around a lot, but Professor Zelleke was very good about systematically introducing them.”

The admiration was mutual. “I've known Anthony for four years, but I'll never forget my first encounter with him, in GPS (Global Perspectives on Society),” says Zelleke. “He was deeply engaged in the material and always had follow-up questions for Vice-Chancellor Lehman after the lecture. When he came to see me in office hours, it was to discuss holding a student event on the origin of the term genocide…. Even as a first-year student, Anthony was committed to engaging with fellow students on matters of critical importance outside the classroom.”

In 2017, still reeling from the results of the 2016 US presidential election, Comeau felt called to spend the fall semester of his junior year studying away in Washington D.C.

“We were all in the cafe [watching the results], and it was a very surreal moment,” he remembers. “And I felt really bad being so far away from the US, so going to D.C. became a definite. I wanted to feel like I was not just sitting by,” he says. 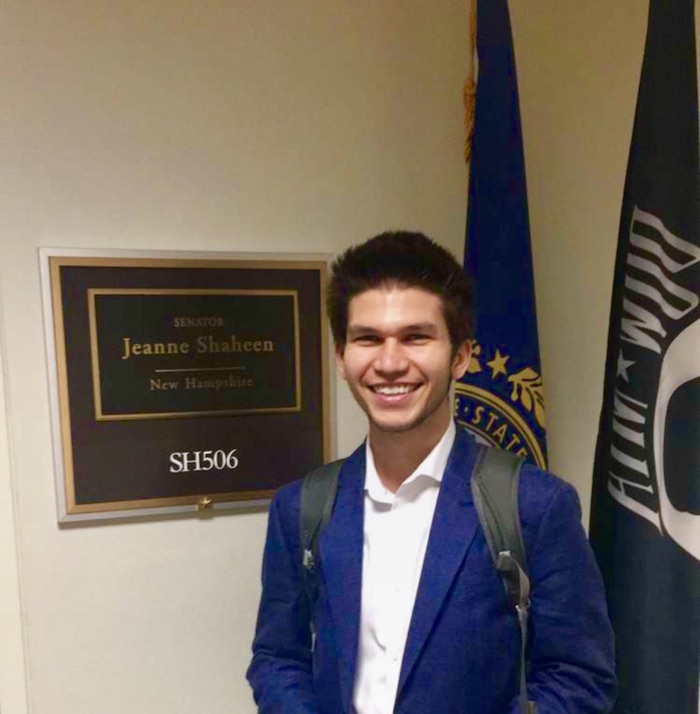 Getting ready for a day at the Senate during his study away semester in DC, fall 2017

Comeau interned in the Capitol Hill office of New Hampshire Senator Jeanne Shaheen, where he was responsible for making sure constituent voices were heard. “I was taking calls, writing down what they'd say, sometimes responding to constituents, and doing research for the legislative staff.”

“Callers might not support the senator you’re working for, but they still have a grievance, and you have to show empathy, which I think was a really important lesson,” he says. “New Hampshire has a severe opioid problem, and one time an elderly man called and just cried for 20 minutes about his son, and all I could say at the time was ‘I'm so sorry….’ This helped me understand that working in public service is about listening to people and then taking concrete action. This and other experiences at the office taught me that you really need to press hard to change things, and I’m really glad I did it.”

The internship experience informed Comeau’s decision to return to New Hampshire after graduation to work on local elections. “Working on local elections will be meaningful to me because I will be working with, talking to, and understanding better the people in my local community.” 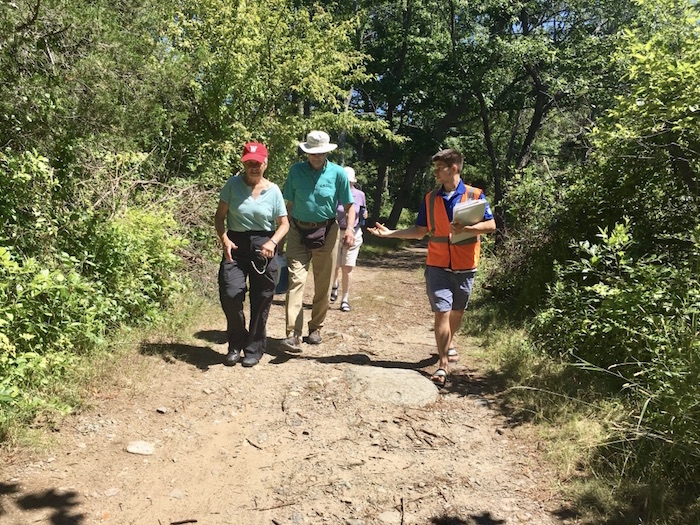 Comeau leading tours of Odiorne Point State Park in New Hampshire, where he worked as a history intern and archivist during the summer of 2018.

After D.C., Comeau spent his spring semester studying away in Buenos Aires, a place he wanted to visit in person after learning about Argentina in the International Criminal Court Student Network group at NYU Shanghai.

“We learned that Argentina was the first country in Latin America to hold trials to hold their dictatorship accountable for what it did--forced detentions, arbitrary killings, censorship,” he said. “I wanted to go there, see the country firsthand and take classes in Spanish for more language exposure.”

At NYU Buenos Aires, Comeau took three classes taught in Spanish and one political science course in English, and was one of only three NYU Shanghai students who studied away there that semester. “One was my really good friend who I’m rooming with now, and he’s Chinese,” he says. “It was interesting to be there with him, because there are so few Chinese people in Argentina.”

With help from NYU Buenos Aires staff, he secured an internship at the Ministry of Modernization, which was established to improve data and basic systems in Argentine cities. As an intern, Comeau’s duties entailed looking over websites to see how easy it was for Argentine citizens to pay taxes or find government information.

“There’s a big movement in Argentina towards the privatization of schools, and often in public schools, there isn’t enough funding,” says Comeau. “I was doing research on the benefits of people from different social classes being in the same school...because I wanted to show the Ministry that integrating schools was better for society.”

Reflecting on his government internships and his experiences at NYU Shanghai, where visiting speakers would discuss everything from dictatorships to transgender rights on campus, Comeau says he’s realized the importance of facilitating understanding between different groups of people.

“[Buenos Aires] was really challenging, but overall it was a good experience,” says Comeau.

“One thing I've learned is that you can hold two contradictory ideas, and they don't necessarily have to oppose each other. I’ve learned not to speak to people in a way that categorizes them, and that it’s important to show people from different countries or backgrounds that you’re willing to meet them halfway, even if you don’t completely understand them.”

Over the past four years, Comeau says that the biggest change he’s noticed in himself is how he’s become more people-oriented and interested in making a local impact by working  with people face-to-face. “What’s important are the people you're around. It's your relationships to people--much like the Chinese saying ‘三人行，必有我师,’ which in essence says to make everyone your teacher."

After working with everyone from US politicians to Argentine activists, Comeau says, “I just have a general sense that I’ll be okay in any environment.” 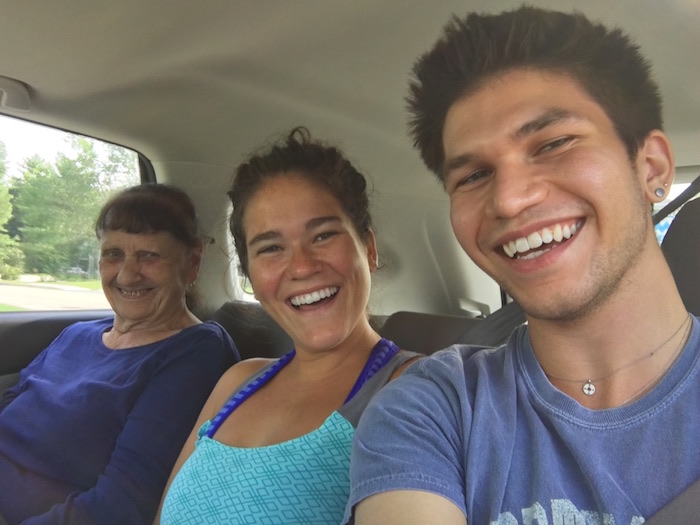 “I grew up in a town with several thousand people, so just to move halfway across the world was bold for me...but I never felt lost in Shanghai. I always had some feeling that everything was going to be okay.”