Haitian Ma ‘20 didn’t know what to expect from her first Global Perspectives on Society lecture in the fall of her freshman year. “Judging from the course title, I thought it was going to be a discussion about diversity… but the first class was actually about global cities,” she said.

“We read articles about the history of Shanghai with different perspectives on the city’s evolution. Professor Corpis then challenged us to think about what it means to live in a ‘global city.’ Who benefits and who loses from living in global cities?”

After the lecture, Ma, a native of Kunshan in nearby Jiangsu Province, started to the see the city around her differently. “That class made me reflect. I began noticing the history of the buildings, the different people who live here. My concept of a modern city had so many assumptions based on capitalism and social hierarchy that I had taken for granted. It was a very deconstructive process for me."

Ma’s experience with GPS is not unique at NYU Shanghai. An idea or an image in class may spark an interest, that thread of curiosity is followed, and before long that student will find him or herself looking at the world with different eyes.

Developed and taught first by Vice Chancellor Jeff Lehman and Nobel prize-winning economist Paul Romer, GPS is designed to expose students to the great thinkers of the past and today, and to the diverse approaches to thinking about and understanding the world.

All students are required to take this one-semester foundational course in the humanities in their freshman year—the only time all 450 students in the same class, who hail from around 35 countries around the world, will study the same course. 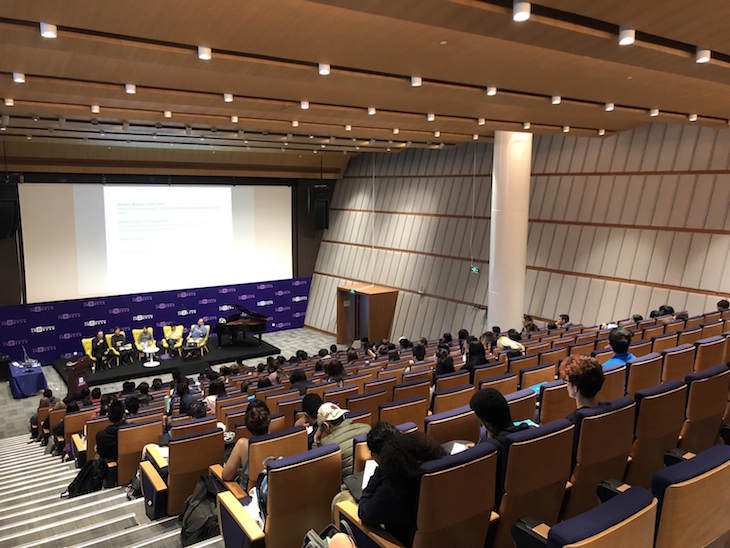 Twice a week during the fall, they attend lectures with titles such as the ‘Social and Political Foundations of Society’, ‘Producing the Self’, and the ‘Sources and Limits of National Identity’. Readings from political economists to poets are assigned to complement the lectures. A team of “GPS Fellows”—postdoctoral scholars from a range of specializations in the social sciences and humanities—then lead weekly “recitations” for small groups of students, where they discuss ideas raised in the texts.

In some ways, GPS is like any other introductory humanities courses taught in liberal arts universities in the United States. Students tackle canonical texts from the history of thought—from Plato to Simone de Beauvoir—and write papers relating the materials to topics of identity, nationality, and globalization.

But that’s where the similarities end.

The course is deeply rooted in its Chinese context. Discussions regularly touch on China and her impact on the world. Furthermore, roughly one-third of the readings are by Chinese authors and thinkers ranging from Confucius to Zhou Enlai.

“We try to expose students to the Western world’s foundational ‘Great Works,' but we also introduce them to texts from Asian and Afro-Caribbean authors, Indian philosophers, as well as works from the natural sciences, psychology, and feminist theory….” says Weslake.

There is a also micro to macro progression of course topics. When students begin the semester, they encounter readings about the individual and the self. As the semester progresses, the topics pan out to encompass collectives, communities, the nation, the marketplace, and the world itself.

For instance, when tackling notions of Human Nature and the Self, students will read the 17th century English philosopher Thomas Hobbes, who asserted that humans are intrinsically selfish. A few weeks later, they’ll read a paper on cognitive science arguing that collaboration is what makes human cognition unique. Eventually, they’ll read Buddhist Indian philosopher Vasubandhu’s exhortation to eradicate all forms of belief in the self.

From Comprehension to Engagement

“The readings are hard. We try to give them primary texts rather than secondary textbook-style readings,” says Weslake. “It might be difficult and confusing at first, but if the text is sophisticated and complex we’re going to respect that.”

It can be a shock to the system, especially if students expect to excel in the course by meeting a checklist of expectations. Many students report feeling confused and lost in the first weeks. But soon, they begin to find their footing.

“The semester starts off gently,” continues Weslake, “with assessments being more about comprehension than analysis, but over time, we start to see enormous progress. I’m actually in awe, especially of the students who also have the struggle of reading primary sources in a second language.”

The sophistication of the students at the end of the course compared with the beginning is dramatic, and both professors have witnessed encouraging signs of engagement.

“Two students came up to me. They were roommates. One international, one Chinese, they looked absolutely exhausted, holding coffees in their hands,” says Corpis. “They said: ‘Professor! We didn’t sleep. We spent the entire night talking about Freud! Does he make any sense? Does he make sense in a Chinese context? Does he make sense in a European context?’ As an educator, these are the really exciting moments.”

But why place such emphasis on a humanities core in the first semester, when students are already challenged by a new environment and new expectations?

“We want all our students to be ‘well educated,’” Vice Chancellor Jeffrey Lehman explains. “We want them to leave NYU Shanghai having thought about the most influential ideas that have shaped human societies across the millennia, and to have discussed those ideas with classmates who grew up in different cultures, with different worldviews.”

He emphasizes the outsized influence the narrow window of time spent in college can have on a person’s life, “This moment of transition from high school to university is the key. This is when students learn there’s more than one right answer, and sometimes no answer at all. This is when they need to be comfortable with uncertainty and ambiguity.”

“Poverty. Gender inequity. Environmental degradation. Overpopulation. Income disparity. Whatever the question that’s raised…the people who come up with the answers need to have a broader perspective than one that is limited to my community, my people, my nation,” says Corpis.

“To change the world, you first need to understand it,” adds Weslake. “We want to see them examine what seem to be inevitable features of the world, and show them that they are actually optional.”