Lancelot Zhang Qilin ’21: Language is the Silk that Weaves Community Together

When he was three years old and growing up in Xianyang, Shaanxi province, Lancelot Zhang Qilin ’21 was confident he could speak English with anyone. “I would walk up to any foreigner I could find on the street to say, ‘Hello, how are you?’ I liked it.”

Now, two decades later, Zhang is preparing to give one of the two student addresses at commencement next week - in English.

Zhang will be leaving much more than his own words behind: Whether it’s the linguistics club, Langua Lingua, that he founded, the Chinese Learning Assistant role he helped nudge into existence, the project to raise live silkworms and help students learn about Chinese culture, or an initiative to help incoming international students survive quarantine, Zhang has made language learning a large part of his efforts to build community  at NYU Shanghai.

“I think my main purpose at NYU Shanghai has been to be available for people and foster connections between people,” Zhang says. “I’m proud of gaining their trust so that they can share things and know they’re heard and seen.”

Zhang says he got his love for languages from his mother - who believed that English would pave the way for her son’s future and moved the family from the countryside to the city for more opportunities. It was also Zhang’s mother who found out about NYU Shanghai, and encouraged him to apply. He remembers submitting an application at the last minute— and was surprised with an acceptance letter.  Deciding to come was one of his first courageous acts - a tremendous leap of faith. “When I was growing up, I never dared to do anything—not even cartwheels,” he says.

But he’s come to believe that it was fate that brought him to Shanghai. “I felt chosen to be here, in a sense, instead of me choosing to be here,” he says. “It was like coming to this place where I always wanted to be as a child—seeing people from different places, hearing different languages.”  When he discovered he shared the same name as the school’s mythical Chinese mascot, a legendary chimera called the Qilin, he figured it was destiny.

It took some time for Zhang to find his niche at NYU Shanghai. Things became clearer to him  after a semester studying away in Abu Dhabi. It was Zhang’s  first time outside of China, and the experience was eye-opening—the hospitality of everyone he met, falling in love with the Arabic language, and building connections with mentors like Carol Brandt, NYU Abu Dhabi’s Vice Provost and Associate Vice Chancellor of Global Education and Outreach.

“Language to me, or to my parents, never sounded like something that you could make a living from. But I saw how Carol was designing global programs, J-term experiences, and study away experiences for all NYU Abu Dhabi students...and it confirmed my academic desire to pursue languages and linguistics, which I always knew but was never brave enough to admit to myself,” he says. “It also influenced what kind of person I wanted to become—someone who gives without expecting much.”

Feeling a sense of community abroad compelled Zhang to strengthen his efforts to get to know his home campus classmates. “I felt like Chinese was my way to go,” he says. He reached out to NYU Shanghai’s Chinese Language department and eventually landed a position to tutor students who were learning Chinese as beginners.

But Zhang wanted to go beyond just tutoring. So, he decided to bring a bit of childhood to campus and introduced a colony of 70 live silkworms (and bushels of mulberry leaves) to the Chinese Language department.

Lancelot Zhang Qilin ’21 showing off the silkworms to passersby in the cafeteria.

“People become kids when they see worms,” he says. “We meet in this sophisticated university setting and have sophisticated discussions, like in GPS…[but] then these kinds of occasions bring us back to where we were as children to share our stories from back then.”

With the COVID-19 pandemic making it even harder for NYU Shanghai’s classes to connect, Zhang decided that before graduation, he’d create every opportunity possible for his classmates to get to know each other. His vision turned into a video project that introduced students and the stories surrounding their names. He connected his Language & Linguistics club with the university film club, 24 Frames, and together they interviewed and filmed 11 students who had stories to share—from name origin to mispronunciations.

Zhang now faces graduation with a bit of a bittersweet heaviness. “At the 88 Days Countdown, I saw a lot of pictures of us from four years ago, and now everyone seems so different,” he says. It made him think about the friends he made this year, the freshmen and sophomores that he paid window-waving visits to in quarantine before they even stepped on campus. 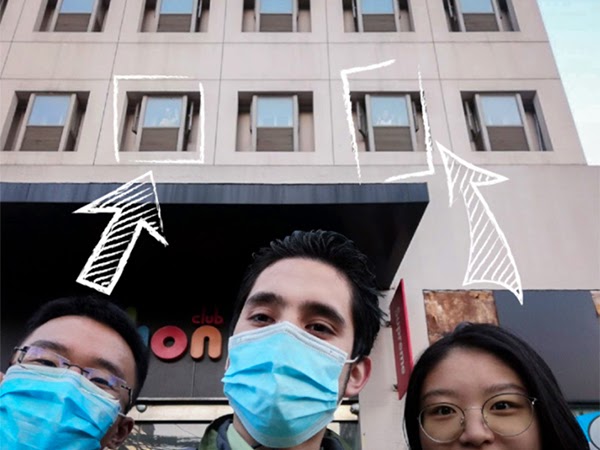 Lancelot Qilin Zhang ’21, Etienne Ortega Flores ’23 and Tang Wenxin ’23 made an outside-window visit to Declan Mazur ’23 and Stephanie Anderson ’23 who are just barely visible posing from their room windows during their quarantine period before returning to campus.

“What are they going to be like in four years? I won’t be by their sides when they’re going through everything I went through,” he says. “But there’s this hope that they’ll change into something even beyond what I can imagine. That’s what I’ll be missing most.”

After graduation, Zhang plans to take his passion for language to the UAE, where he hopes to teach Chinese at an international school—he’s working on an International Chinese Teaching License and will soon be applying for jobs. Once in Abu Dhabi, Zhang looks forward to continuing his studies in Arabic, Spanish, and French, and acquiring a driver’s license and sky-diving license.

Beyond that, he says he’s up for anything. “I think based on my past 21 years of life, it will just come to me. Just like NYU Shanghai did. I don’t know where I will end up after that, but now I’m looking forward to it very much instead of being anxious of the uncertain. I'm now brave enough. I’ve succeeded in doing cartwheels. I'm even doing handstands now.”

Zane Fadul ’21: Rising to the Occasion