In her time at NYU Shanghai, Sydney native Taylah Bland has been elected Student Body President, self-designed a major, acted in and produced plays with the Thespian Club, studied away in London and New York, mastered Chinese, and secured a spot among 154 young leaders in the Schwarzman Scholars Fellowship.

There was a powerful reason for her drive: In order to fund her tuition, Bland’s parents sold their family home where they lived for 18 years, and her father took on an additional job, working 19 hours a day throughout the four years she has been at NYU Shanghai.

“After seeing that, I was set on seizing every opportunity here…. I’ve mapped out my career, making every connection that I can...to put myself in a position where after I’ve asserted myself in the working world for a few years, my parents will never have to worry about money again.” 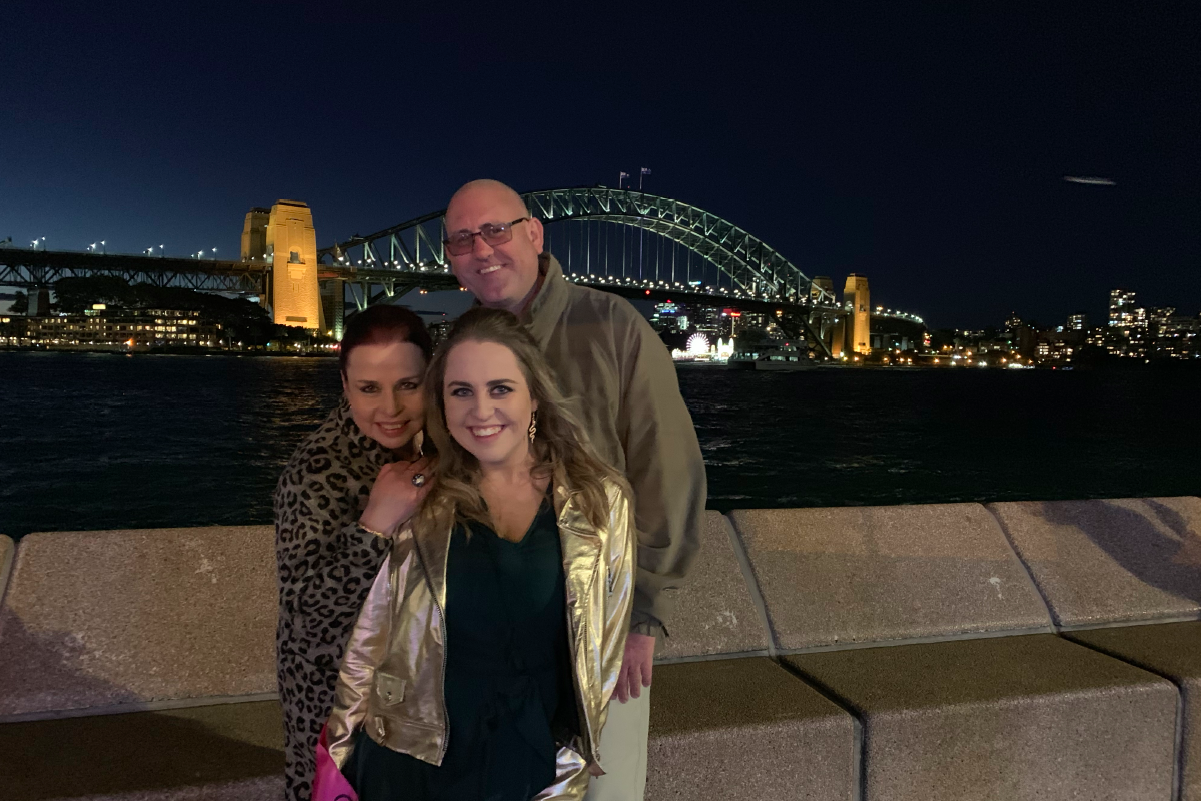 Bland with her parents Leanne and Paul Bland at her 21st birthday celebration at the Sydney Opera House.

But when Bland and her mother arrived in Shanghai on a stormy day in August 2017, they had no idea what to expect.

“Both of us spoke no Chinese...and it was the first time that we had ever been to Asia,” recalls Bland. “But once we got to Jinqiao and saw everybody...that sense of community was already there…. What I distinctly remember is that everybody was huddling under this gazebo-like structure, and waiting out this storm…. Everyone came together and had a conversation, and made you feel so welcome.”

She began her undergraduate career on a business and finance track, but eventually decided to explore possibilities in a long-time interest of hers -- the law.

After researching prerequisites for law school, she worked with the Social Sciences area lead, professor Almaz Zelleke to create a Comparative Law track within Social Sciences.

“I didn’t know what legal jurisdiction I wanted to practice in, so I thought ‘what better way to find out than to...survey four different jurisdictions of law...and then work out where I might fit in,’” says Bland. “I don’t think it would have happened if I had been at another institution.”

“She knew she wanted to study law from a comparative perspective and had already planned her study away sites and courses to support that plan. It was quite impressive!” says Zelleke.

Since her sophomore year, she has studied English law, the Chinese Constitution, and American Constitutional law in London, Shanghai, and New York City respectively. She is currently home in Sydney, where she has been since the beginning of the COVID-19 outbreak in January 2020, working on her capstone thesis about the reform of sexual assault laws in New South Wales during the 1970s.

“[Sexual assault]  can affect anybody....and given the severity of the offense, and how the effects of sexual assault can traumatize and ruin lives, the least we can do as a society is to give people the legal protections, accessibility, and means to bring a case in order to achieve some sort of justice for themselves,” says Bland.

In addition to a heavy slate of academic commitments, Bland also played an active role in the Thespian Club. Here, she performs as a character in the song King of New York, from the musical Newsies in the NYU Shanghai Thespian Society Musical Showcase Production.

Like many international students who have not been able to return to China, Bland has had to maintain her connection to NYU Shanghai via the internet. Her grueling schedule last fall of classes, student government meetings, tutoring sessions with students through the Academic Resources Center, where she works as a Learning Assistant in writing and speaking, and meetings with her capstone advisor Stephen Harder, often resulted in 12 to 14 hours a day on Zoom. “It was insane!” says Bland.

Despite the long hours online, Bland says she still felt close to the university community, especially in the classes she took for her Chinese language minor.

“We had a really great sense of community in that class! We all knew what each other was going through,” says Bland whose study of the Chinese language has progressed from Elementary I to Advanced II, where she converses on topics such as politics, environmental politics, and women’s rights.

“I went from not being able to speak anything to loving it so much that my friends and I still message in Chinese. My phone is set to Chinese,” says Bland.

One of Bland’s favorite memories is the Cultural Expo she helped organize in 2019. “I can still remember everyone dancing and singing, so many nationalities and cultures were coming together and that was magical to watch.”

Bland will have plenty of opportunity to keep up with her Chinese as she will be returning to China for the Schwarzman program at Beijing’s Tsinghua University in August.

“I thought it would be an incredible way for me to further my understanding of China’s foreign and domestic policy and align that with Australia,” she says. “Australia-China relations at present are terrible...there’s so much tension between the two countries, so I thought, ‘OK we need to fix this.’ The two countries need to work together, and that’s what I put through on my application.”

Bland plans to pursue a Master’s in Global Affairs through the program, with a focus on law and public policy.

“But honestly, I’m really excited to learn from all the other scholars. There's 154 of us, we come from different places, we're all different ages. I'd be one of the youngest in the program. It will be really interesting...to learn and be inspired from them and to see where it can take me.”

Alexander Bogdanowicz '20: Everything is an Opening, a Shattering of Expectations