About 70 new squirming creatures joined the Chinese department this Spring, as students launched a new initiative to raise silkworms and learn more about Chinese language and culture at the same time.

The project is being spearheaded by Lancelot Zhang Qilin ’21, one of the ARC Learning Assistants for Chinese language. “I was brainstorming some activities to go hand-in-hand with textbook learning, and it came to me, ‘Why don’t we do silkworms?’” he said. “A lot of us [Chinese students] raised silkworms in our primary schools to learn about science and appreciate life and responsibility, so it’s an intimate childhood memory I wanted to share with my international classmates.” Lancelot Zhang Qilin ’21 showing off the silkworms to passersby in the cafeteria. “I love how silkworms are a way to bring people together, share stories, and become children again as they sit and stare at them and get excited about their growth.”

Silkworms have long played a vital role in Chinese history and culture. “They can make silk, which can become textiles or fillings for quilts and is much lighter or finer than cotton or hemp,” Zhang said. “Their droppings can also be used for Traditional Chinese Medicine and their larvae can also be eaten fried or cooked.”

But raising animals on campus turned out to be more challenging than expected. Zhang first had to get support from the Chinese professors and apply for funding from the World Languages department. When he found out that Residential Life forbade live animals in the dorms, he turned to Public Safety to ask about raising them in the academic building--and after some convincing, they agreed. 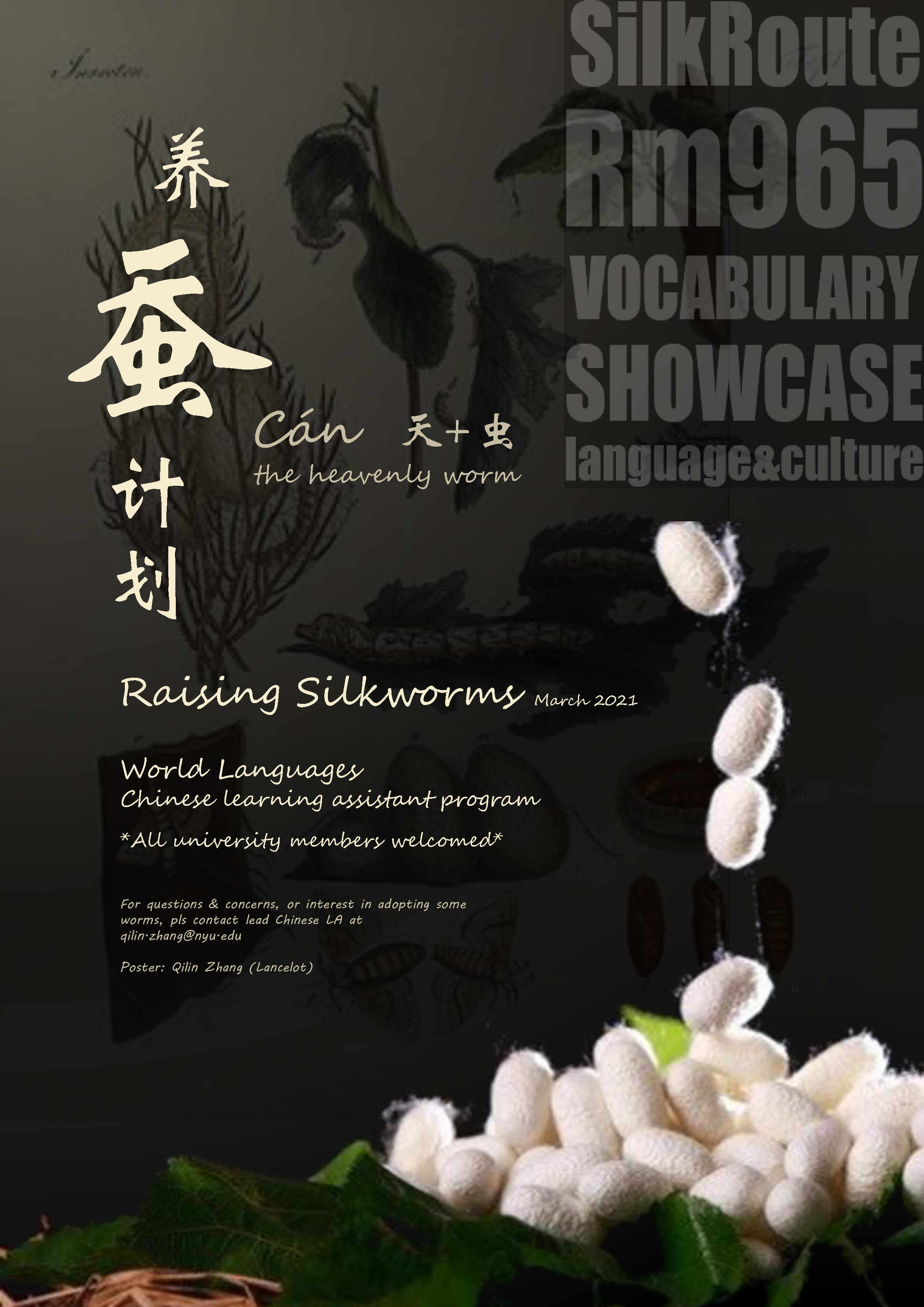 After ordering supplies off of Taobao, including the silkworms, a glass display case, and over 700 grams of mulberry leaves, the students organized a feeding and caring rotation. They stop by the Chinese Language Corner twice a day to make sure the worms have enough mulberry leaves to munch on.

“The project is designed so that students take an active role in raising the silkworms, which also gives them the opportunity to learn a new set of vocabulary terms, and to practice writing by journaling about the experience,” said Director of World Languages Melanie Hackney. “We hope to continue to create new language opportunities for students who want to practice and expand their Chinese.” 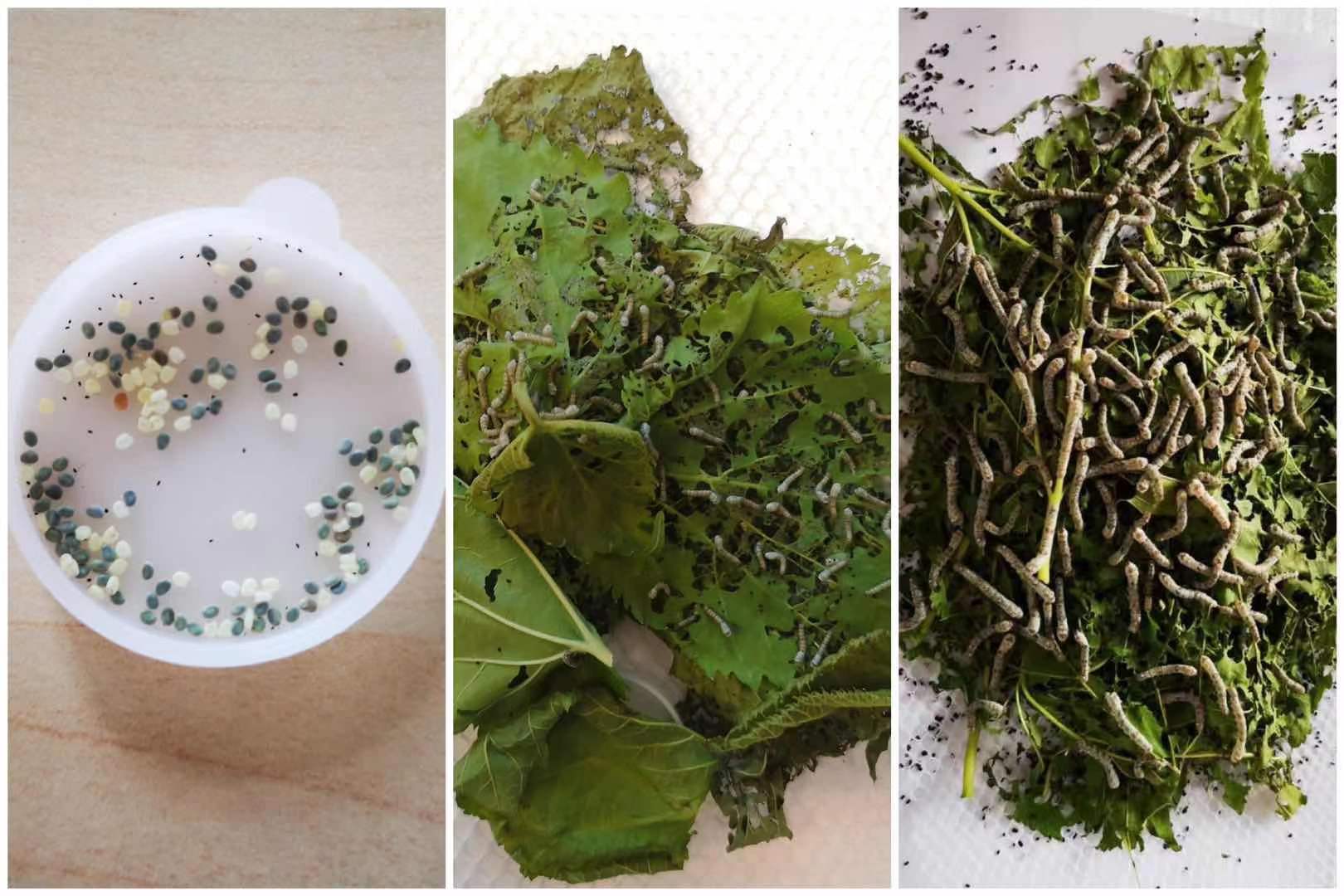 The silkworms on March 13th as eggs, on March 17th as newly hatched small worms, and March 25th. Their entire lifespan is about 30-40 days.

In the Chinese Language Corner (Room 965) where the worms reside, Zhang has created hand-written posters with Chinese characters, pinyin, and English directions for taking care of the worms along with history lessons about the Silk Road and linguistics lessons about the origin of characters.

“I made a vocabulary map and started with ‘蚕 [cán]’ which is ‘silkworm’ in Chinese, and from there, expanded to lots of words that relate to silkworms and mulberry trees,” Zhang said. “‘蚕’ is a great example of the pictographic and compositional origin of Chinese characters. It consists of ‘天’ [tiān], the character for sky or heaven, and ‘虫’ [chóng], the character for insect which actually looks like a worm with buggy eyes and a curling tail. The character ‘蚕’ literally means the worm from heaven, which perfectly captures the importance of the silkworm to the Chinese people,” Zhang said, adding that he hopes the silkworms will inspire students to learn more about Chinese history, culture and language. So far, Zhang’s plan seems to be working. “I researched about 30-50 words related to silkworms and then met with my teacher twice to go over them,” said Guido Jacubowicz ‘24 from Argentina. “Learning the radical for silk (纟[sī]) has helped me recognize a lot of words both inside and outside of class and engage more in discussions.” 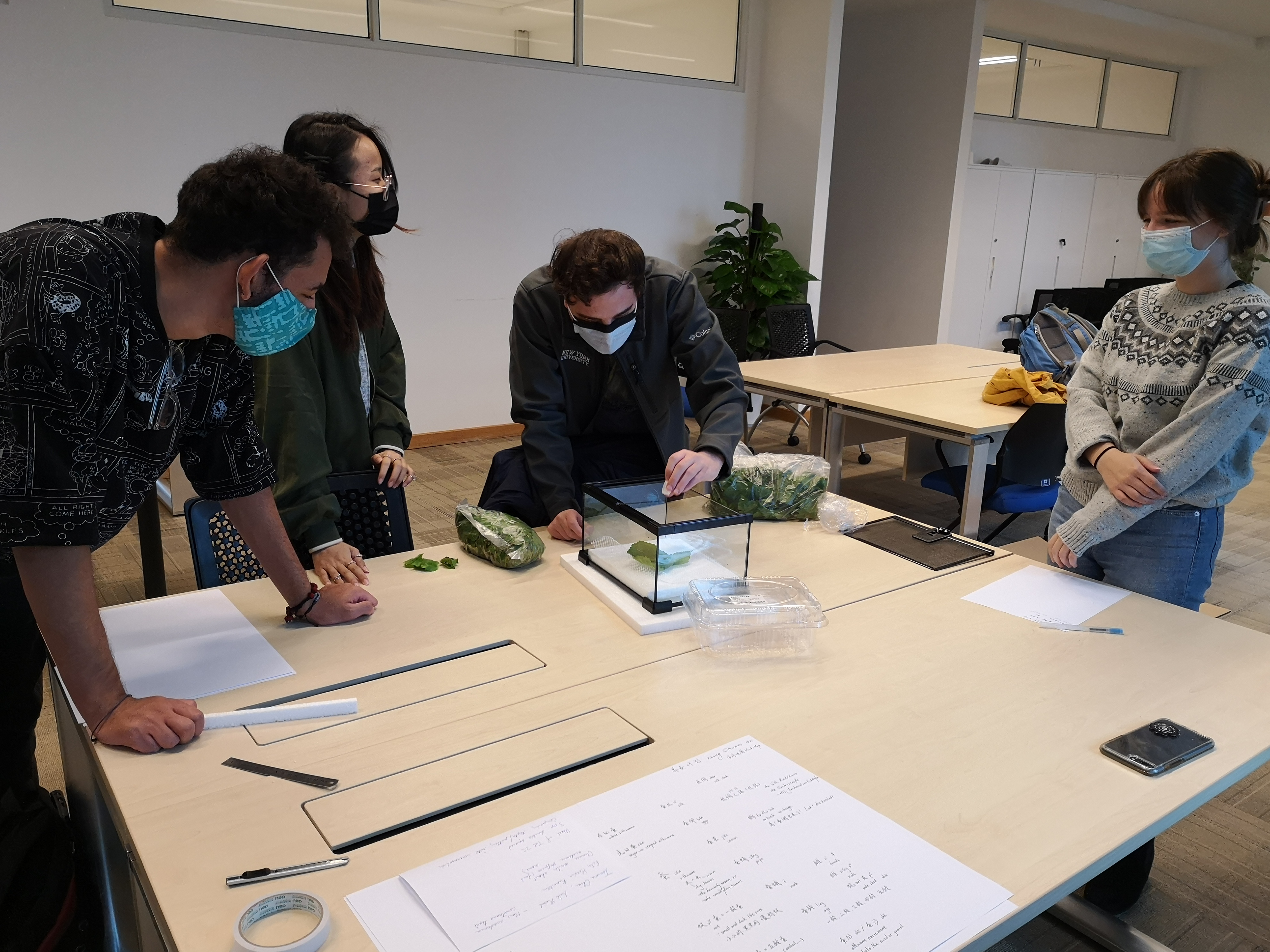 What’s next for the project? In a few weeks, the silkworms will be fully grown and will create oval shaped cocoons. The worms will then continue to bind their cocoons with more and more silk until the cocoons become white and ready for harvest. The students are excited about the possibility of harvesting the silk, and have even proposed making Dean of Students David Pe a silk tie from their harvest. Those interested in visiting the silkworms and seeing their growth can visit room 965 in the academic building.