A selection of art works by NYU Shanghai faculty and students were exhibited this month at the Power Station of Art (PSA)—a former coal-electric plant turned museum space—as part of a warm up to 水体 Bodies of Water: The 13th Shanghai Biennale.

Adapting to difficulties posed by COVID-19, the Shanghai Biennale—China’s oldest art biennale and one of Asia’s most influential—was this time executed in an evolving eight-month “in crescendo” project that unfolded in three phases between November 2020 and June 2021.

“The Biennale happens every two years, since 1996,” said Clinical Assistant Professor of Arts Maya Kramer. “It's a super important international exhibition and has always been an important cultural event. For this year's Biennale, the curators hosted a number of 'warm-up' events, and this exhibition is a part of that.”

Last November, the Biennale’s first phase, “A Wet-Run Rehearsal,” included a live and online performative summit, and from this April to June 2021, the final phase, “Exhibition” will expand from the PSA into a series of locations along the Huangpu River and across the city of Shanghai.

But for the current second phase “An Ecosystem of Alliances,” NYU Shanghai was chosen to be a part of a collective of featured artists, activists, and institutions including Fudan University, the Shanghai Institute of Visual Arts, CAA in Hangzhou, Songjiang Academy of Fine Arts, and Jiaotong University. “Each school had their own mini exhibition, each with its own title, so Movement/Memory/Mapping was our title,” Kramer said.

NYU Shanghai professors Barbara Edelstein, Zhang Jian-Jun, Monika Lin, Maya Kramer, and Alice Wang collaborated on selecting works by current and former students to include. “We were approached through personal connections, after which we put together a proposal to be reviewed by the curators,” said Lin. “Each of us faculty chose a handful of our past students’ work which related to the Biennale’s theme (Bodies of Water) which we interpreted as a fluid state—thus an embodied mapping of movement and memory,” said Lin.

In the end, the faculty chose 27 works -  a collection of books, drawings, photographs, prints, sculptures and videos that dealt with the theme of fluidity and its relation to identity, memory, experience, and place.

"We received wonderful feedback about how distinctive our section was, that its analog bent and personal nature were refreshing and made a strong impression," says Kramer. "As the visual arts area at NYU Shanghai is modest in size, we were proud that student and faculty work commanded such attention."

The exhibition runs through Sunday March 21, 2021.

"Globe proposes a futuristic, speculative subterranean and underwater cosmology that is populated by mutations and fortifications. My algorithmic-based movements through the city led me through subways, underutilized urban areas, hidden pockets of rewarded sites, curated and cultivated parks and gardens, and malls. Whenever I encountered open water, I collected samples to fill the globes and create living eco-systems." !Acirema, renders the US and its cities as seen from outer space on a jagged background of coal, showing its density, population and energy use. Deep blues and purples indicate the landmass, whereas gold and silver leaf give form to the urban centers.  The coal background conjures the land’s physicality, in contrast to the diagrammatic quality of the map, and concretizes the dependence on this toxic energy source. 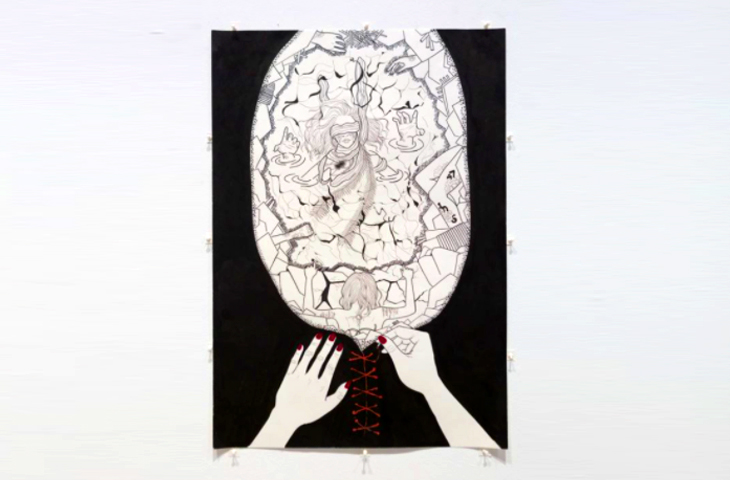 For this drawing, the student recalled two harrowing experiences of nature’s force, nearly drowning in a cold river and experiencing a strong earthquake. In this drawing, she imagines alternative realities where she perished in the accidents, and then stitches up the aperture to this other, potential, world.