In his decade as a police psychologist in Tochigi, Japan, Shumpei Haginoya worked hundreds of cases, administering polygraph exams, and creating psychological profiles to help identify suspects. Analyzing environmental, geographical, and other factors, Haginoya could determine whether crimes were serial and predict the occupation, gender, and location of possible suspects.

Haginoya, who decided to become a police psychologist as a teenager after watching police investigate a mass murder at a local primary school, was proud that his psychological insights could help break open a case. “Usually, as suspects realized how much information the police knew, they would start to say something. It was easier for my colleagues to conduct interrogation at this point.”

But eventually, he became impatient with making a difference just one case at a time. “The number of cases I could solve as a police personnel is limited, but research can overcome that limitation and make an influence over time and space,” he says.

Haginoya’s hopes of making a bigger impact ultimately led him to quit the police force and join NYU Shanghai in 2018 as a post-doctoral fellow in the research lab of Professor of Psychology Pekka Santtila. Now, having completed his fellowship and published four papers, Haginoya will return to Japan in April as a lecturer at Meiji Gakuin University.

Even while on the job in the police force, Haginoya, who holds a PhD in Psychology from Hosei University, continued to pursue his academic interests. In 2017, at an international psychology conference, Haginoya became interested in the research of a graduate student of Santtila’s to improve the interviewing skills of child abuse investigators. “I’ve seen investigators unconsciously manipulating children in interviews,” Haginoya says. “So, I reached out to Pekka and became their collaborator in Japan.” When a postdoc on Santtila’s team became available the following year, Haginoya decided to move to Shanghai to become a full-time researcher. “I realized that was the time when I could make some changes and concentrate on research,” he says. “I also appreciated the international experience at NYU Shanghai which I could never gain at a prefectural police office.” 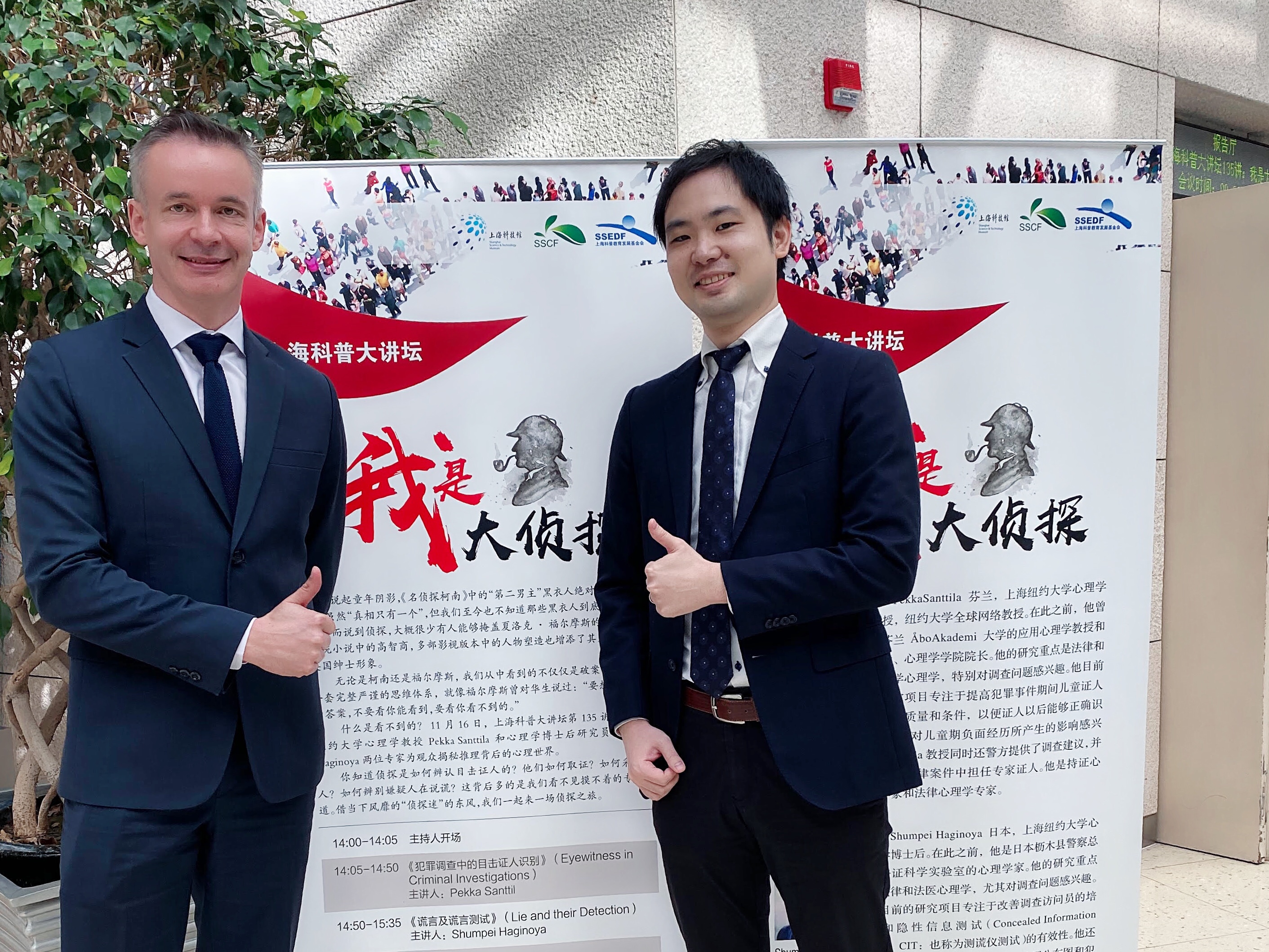 In Shanghai, Haginoya, Santtila, and their colleagues have been developing a training program called Avatar Training that enables child abuse investigators to practice their interview skills with avatars that respond to questions according to the algorithms based on empirical research. In a typical session, an investigator can ask questions to an avatar, and an operator will help encode the questions to the system. Then, the algorithm behind the avatar will provide answers from the answer pool based on the question type and predefined probabilities of each answer. The research team will evaluate whether an investigator has been successful in eliciting accurate information and give feedback on which questions are efficient and which are not.

“Open-ended questions, such as ‘tell me what happened,’ are empirically more effective in eliciting accurate information from children than closed questions,” Haginoya says. “The program aims to encourage and lead the investigators to use more open-ended questions and supportive statements, such as ‘I want to know more about you,’ to facilitate interviews with children.”

Haginoya says that about 70 to 80 police practitioners and clinical psychologists in Japan have been trained by this system so far. The team is currently developing versions in several languages, including Chinese, and working to introduce the program to more police departments in Japan and around the world.

“Shumpei’s experience of working for the police in Japan has been invaluable as he has always brought in that perspective to our discussions. That is, how to make sure we do things in a way that will be practically relevant in the field,” says Santtila. “We’re happy to see our findings being used in practice and helping both the police and the victims.”

As he looks toward his new lecturership at Meiji Gakuin University, Haginoya says he is grateful for the opportunities he’s had at Shanghai to gain teaching experience - he was able to teach sections of the Introduction to Psychology class - and confirm that he made the right choice in leaving policing for an academic career. “It was sometimes hard to make changes or express opinions towards national or global issues while affiliated to a prefectural police office. But as a researcher, I don’t need to limit my area and I can, to some extent, see problems more clearly from an outside perspective,” Haginoya said. “But I’m still hoping to apply my findings to investigation.”

From India to China, Tansen Sen’s Journey between Two Nations

Professor and Students Work Together to Building an Intelligent Parking App