What is Chineseness? The difference between deaf and Deaf? What does feminist, antiracist activism look like in the time of COVID-19? How can an individual act as an ally to marginalized people?

From Monday to Wednesday, participants could spend the afternoon visiting several pop-up booths in NYU Shanghai’s cafeteria, cafe and Go Local campus, where they could pick up some sign language, learn to crochet, and learn about the myths of menstruation with student leaders, Dean’s Fellows, and Ally Week Ambassadors. 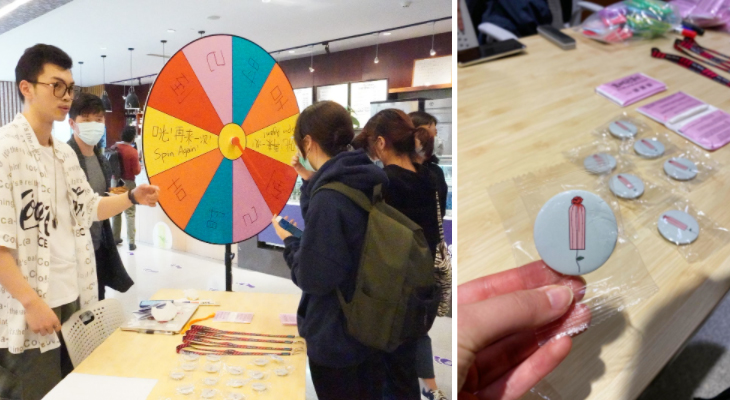 Participants in the 2F cafe spun a giant wheel to answer trivia questions about menstruation to test their knowledge and get a conversation going—from knowing symptoms of toxic shock syndrome to whether they believed periods had enough mainstream media representation. Giveaways included miniature menstruation-themed buttons—one depicts a tampon blooming into a rose, and another says “I have a tampon. Ask me for one.” 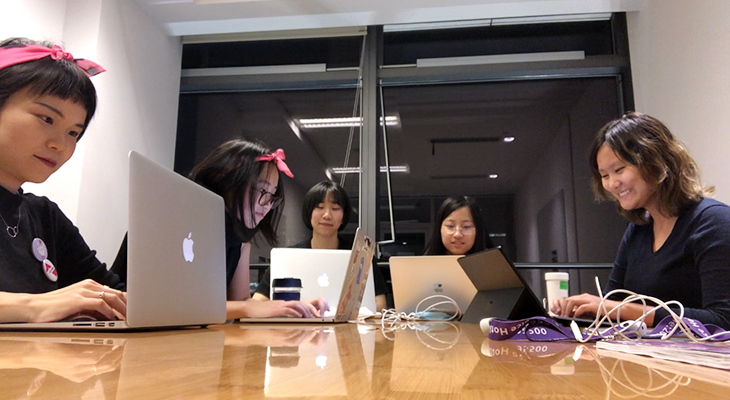 With the help of multiple translators and interpreters, the Zoom panel was simultaneously translated between English, Chinese, and Chinese Sign Language, making it accessible for everyone at the event.

Cui said she identified as “Deaf of Deaf,” meaning she’s a Deaf person from a Deaf family. As a native of Wuhan, she told stories of her experience keeping the Wuhan Deaf community informed during the height of the COVID-19 pandemic, and how she found strength in her Deafness while in college.

“For the longest time, society assign[ed] me the status of disability and inferiority, telling me that I will be treated with respect only if I go above and beyond,” says Cui. “Deaf culture informs me that sign language is not ‘dumb’ but a language that shares equal status as Mandarin. My experience is not hearing loss. It’s gaining Deafness.” 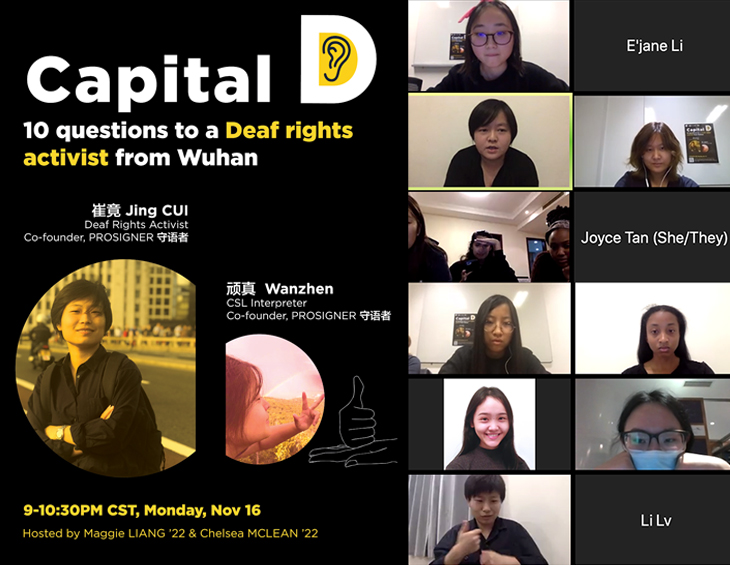 Poster and panel discussion screenshot for “Capital D: 10 questions for a Deaf rights activist from Wuhan”

“People with ‘disabilities’ seem to live in a parallel universe, or so we think. If one ever wonders about deaf people’s lives, one should easily recognize that they live in the same world as we do; they have subcultures and diversities within themselves as we do; most importantly, they are no less human than we are,” Liang said. “The separation of ‘them’ and ‘us’ even sounds illegitimate. It is time to learn about that ‘parallel universe’ and start to realize our own privilege and ignorance.” 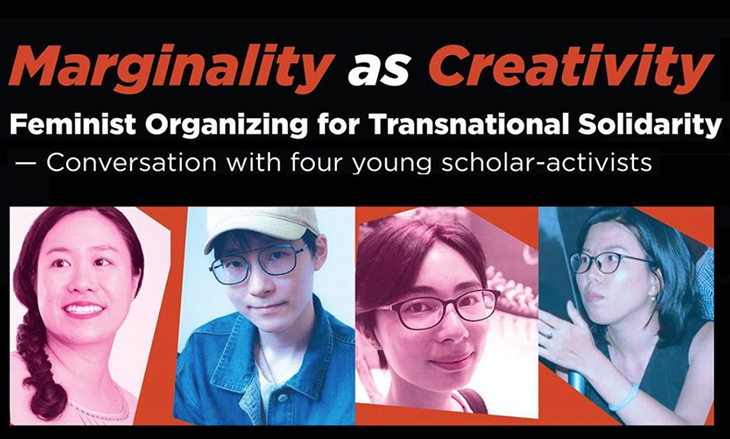 “From Marginality to Creativity: Feminist Organizing for Transnational Solidarity.”

Tuesday night’s Zoom panel event “From Marginality to Creativity: Feminist Organizing for Transnational Solidarity” featured four young, feminist, anti-racist, scholar-activists in the UK, the US, and China. Rachel Kuo, co-founder of the Asian American Feminist Collective (AAFC), feminist political scientist Jin Xia’nan, Zhao Mengyang, a doctoral student in sociology at the University of Pennsylvania, and Ni Leiyun  a PhD researcher in history at the University of Warwick  shared how they’ve channeled their experiences as females, Chinese international students, Asian-American, or a combination—into creative engagement for social justice work and finding empowerment in a “radical openness.”

“The pandemic is a punch in the face to many Chinese,” said Jin, who explained how during the onset of COVID-19, many Chinese in the UK felt moved to fight for equality—something she said they may have taken for granted there. Jin and Ni worked together to advocate for antiracism and antisexism in the UK—pushing people to reflect on the root problem and act beyond sympathizing for victims. They encouraged students to start in their own small communities—to sit down with friends and have conversations.

“Small action can generate big change,” Ni said. “When we are doing this, people around us will be inspired and join us.”

“Activism is a lifelong process,” Kuo added. “It takes time to find and grow a community.” 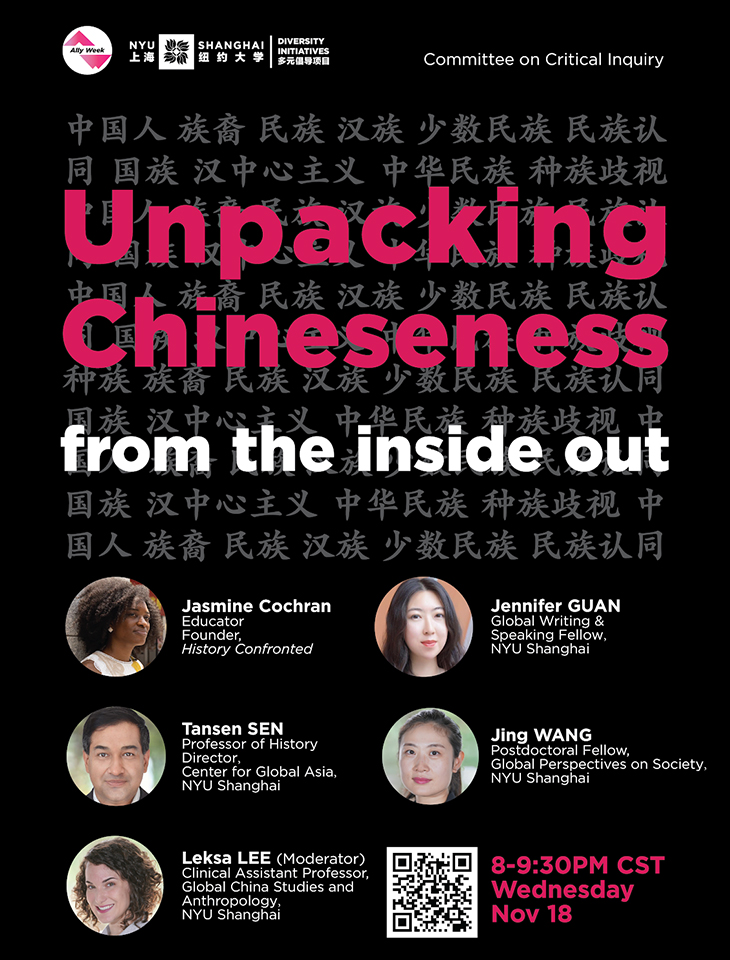 Co-hosted by NYU Shanghai’s Committee on Critical Inquiry, Wednesday evening’s event of “Unpacking Chineseness from the inside out” brought over 100 NYU Shanghai community members together to explore the Chinese identity from a range of angles—from who can claim Chineseness to how the idea of race is or isn’t applicable.

“I am inescapably Chinese by descent, I am only sometimes Chinese by consent,” said Guan, quoting Ien Ang. “When and how is a matter of politics.”

“What we think about being Chinese is politically shaped and ingrained as we grow up,” Wang said. “Now is a time to rethink who we can be or who we choose to be besides this ethnic or racial notion of being Chinese. I remember personally grappling with this, so I can't say I have an easy solution to fix that. But it's really important to be honest about how we feel in that way and what shapes how we feel.”

On Thursday, Professor of Arts Monika Lin introduced participants to crochet, a fiber art historically perceived as a ‘female’ craft. After the talk, participants symbolically “untangled gender stereotypes” by weaving their own crocheted creations.

“We must ask ourselves why some of these materials and technologies are still so much associated with gender and therefore placed lower on a hierarchical scale in terms of their value,” Lin said. 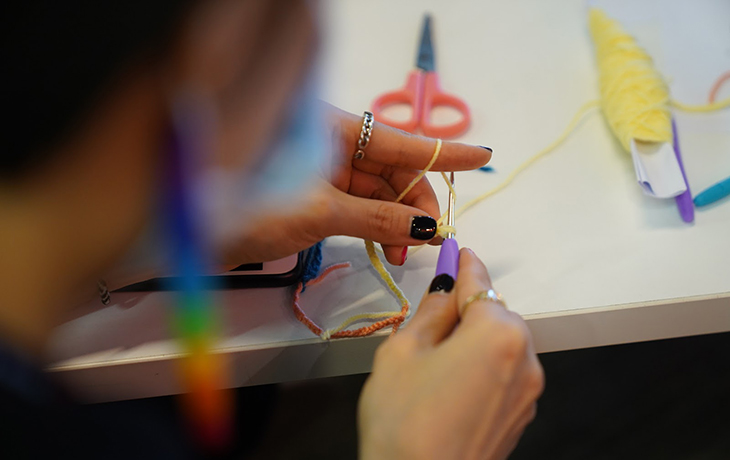 She shared examples of fiber artwork from artist Ghada Amer, who represents women through the medium of thread, as well as works by poet and visual artist Jen Bervin, and Lin Tian Miao whose art uses thread and textiles to challenge normative ideas of womanhood, beauty, and motherhood.

“I challenge you to continue to think about how artists—and not just female artists—can use materials to sublimate hierarchies of understanding of what artwork is made from and what constitutes artwork as well as infuse those methodologies and intentions with new histories or uncovered histories,” Lin said. 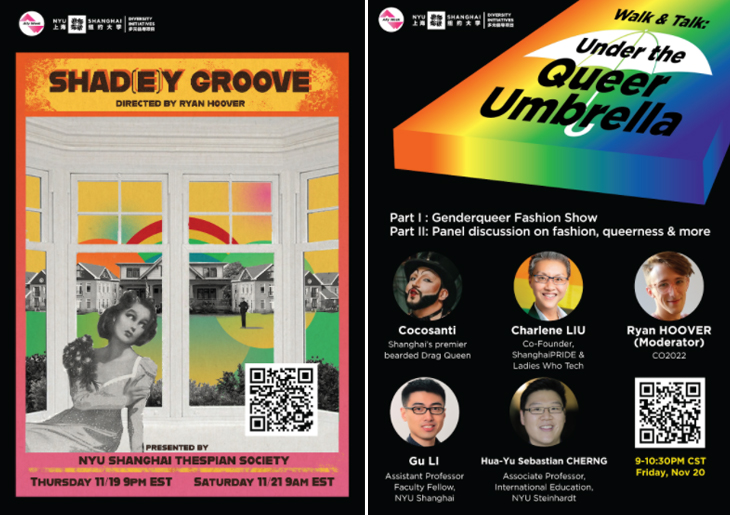 Ally Week’s grand finale was celebrated through a Genderqueer Fashion Show which welcomed all fashion expressions beyond the gender binary. Hosted live online, it highlighted catwalk video clips submitted by students, faculty, staff, and outside guests.