"Chancellor Yu! President Hamilton! Vice-Chancellor Lehman! Friends! Colleagues! Parents! Ladies and Gentlemen! Salute with me our students of the class of 2019! Dear students, on behalf of the whole NYU Shanghai community, I offer you heartfelt congratulations!

We live in a world of contradictions both large and small. In Shanghai, in the space of a city block, you can stroll out of the past into the future, and you can see for yourself the evidence that China is simultaneously one of the world’s most powerful economies, yet is still in some respects a developing nation. Around the world, politics is becoming more and more locally focused and yet the globe is daily more interconnected. Some people are getting very much richer while others are getting very much poorer: inequalities are growing, not shrinking. The private and public spheres of life, which used to be clearly delineated, blend daily more and more into one another. Women are unprecedentedly prominent in public life, with almost a dozen female heads of state or prime ministers; in the United States, no less than six women are running for president, while the #MeToo movement has seemed to mark some kind of turning point in this regard. And yet an extraordinary lack of respect for women has become increasingly both commonplace and highly visible. How contradictory it all is!

What are we to make of all these contradictions, and the many others that daily surround us? Opposites are often thought of as completely incompatible—“polar opposites,” but they are best understood as situated at the two ends of a single spectrum along which one blends into the other, contains the seeds of the other, and may transform into its opposite even as it also transforms it into something new. Contradiction also is all about dynamism and about the transience and changeability all around us.

Many great thinkers have applied their minds to the phenomenon of contradiction, in different ways, and I want to refer very briefly to just two of them, two people whose ideas, in different ways, have impacted your lives and will, I believe, continue to do so. 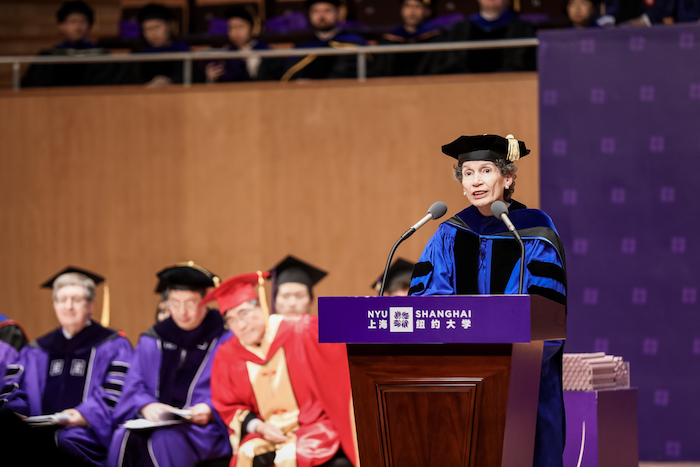 As you will recall from GPS 4 years ago—the theorist and political leader Mao Zedong eloquently wrote in his famous essay “on contradiction” (矛盾论) about the interdependence of opposites and how one cannot exist without the other. He described the contingency of contradictions—how contradictory phenomena may become compatible in certain contexts, and how something may indeed transform into its opposite and then transform back again or change into something else. This essay is of course one of the founding documents of the People’s Republic of China. Like you, I read it in college, and I will say that the ideas it set forth never really left me.

Mao was a political theorizer first, and a poet second, and I want to turn your attention now to someone who was a poet first and foremost, and is not so often thought of as a great theorizer, but who coined the phrase “Negative Capability” for a concept that by now should be second nature to you. I am speaking of the English poet John Keats, who during his short life—he was not a lot older than you when he died, 25 years old—created so much of enduring value.

Negative Capability refers to a willingness to embrace uncertainty, to live with ambiguity and to prefer the beauty of mystery to “irritable reaching after fact and reason.” This, Keats said, was “the quality that went to form a Man of Achievement” (for in those days people did not generally consider women to be likely to achieve much). Keats understood life to consist of a series of unanswered or only gradually answered questions, locked rooms to which the doors may—or may not--eventually open, and he saw clearly that the foundation of human joy and creativity, in both the arts and the sciences, lies in nurturing a sense of possibilities and open-mindedness.

Keats’ most celebrated poems, all written in 1819, 200 years ago this year, illustrate this exquisitely. In his Ode to Autumn he describes that season of, as he put it, mists and mellow fruitfulness, as at once the pinnacle of ripeness and the beginning of decay. One is reminded here of the Chinese observations that “at noon the sun begins to set.”  In Ode to a Nightingale, Keats contrasts his transcendent joy at hearing the nightingale’s song with the sorrow of human grief and sickness, referring to his brother’s death from tuberculosis, an illness which also claimed Keats soon thereafter. In Ode on Melancholy he simultaneously celebrates and laments the fact that acute sadness and passionate happiness are two sides of the same coin, one producing the other, all indicative of the transience and change that surround us, for better or for worse.

Today marks the dreaded yet much anticipated end of your four years at NYU Shanghai, at the same time as it marks the dreaded yet much anticipated beginning of the next phase of your life. Mao and Keats, those two seeming opposites, understood the joy and the sadness you feel today and that we feel with you, and they will go with you as we will wherever you are and whatever you do. Congratulations, Class of 2019!"

More speeches from the ceremony: