Co-sponsored by cross-platform game engine, Unity China, the event included a brief award ceremony where students were recognized for their demonstrated best use of the Unity platform. The showcase was named after one of their course readings, Invisible Cities, the famous novel by Italo Calvino, in which the explorer Marco Polo narrates to the Chinese emperor Kublai Khan fictitious cities that he has encountered during his long journey.

“Both of the courses investigate, with different approaches, the uses of immersive environments in art, design, technology, and education,” Didakis said. “We considered that the title ‘Invisible Cities’ would be appropriate in encapsulating an understanding of structures that can be immaterial, imaginary, but at the same time experientially real.” 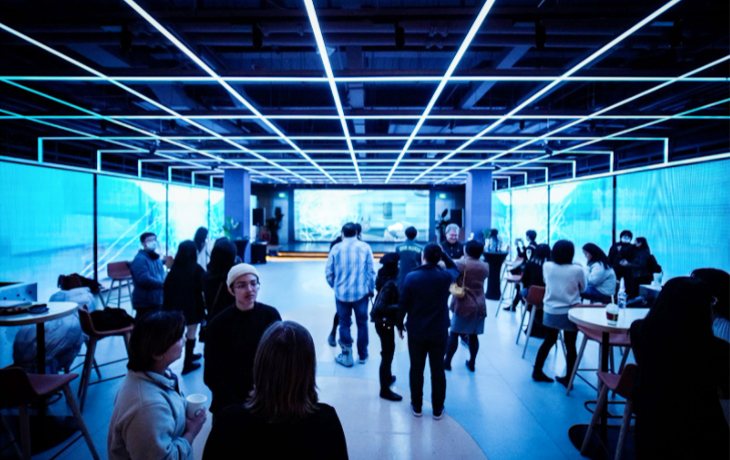 Students spent much of the semester in the IMA studio, building on the technical skills needed to achieve and exhibit their final projects—from specifications on fitting their work onto the exhibition screens to using music and sound to successfully convey the mood of their visual designs. “Each composition involves a wide range of both technical and artistic skills, and our students managed to handle this balance in a highly sophisticated and professional way,” said Didakis.

Kyle Brueggemann ’22 (left) and Max Sun ’23 (right) used a series of interrelating, co-moving orbits to capture ‘the gentle yet profound - intangible, yet inseparable - way in which the self and the universe interact and influence one another.’ Their project, titled 天行有常, was inspired by the wisdom chronicled in the ancient philosophical manual of I Ching (易经), also known as the “Book of Changes.”

Mario Yang and Kessi Lin created the City of Ink, inspired by the Chinese literature classic Mountains and Rivers (Shan Hai Jing). The ink of a scholar’s letter one day came to life, levitated off the page, and became a series of silk strands that allow its residents to navigate past, present, and future.

Elena Dagan (left) and Jennifer Cheung (right) designed a vertical city called Perpetua which exists in a constant state of divisive motion. The city’s lower class citizens live in impermanent pods that float monotonously until their inevitable evaporation. Forced from their homes, the continuous relocation of the lower class generates energy for the opulent few living above the clouds. Trapped in a system of scarcity and volatility, the lower class powers the very system that exploits them.

ИѦλЯ (Zhuochen Yuan) and Yinqi Wang created Κρόνος,  “a prognosis system invented by the scientists of K2-72e that is used to extract and analyze information about distant civilizations. Fragments of cultural artifacts collected from reachable exoplanets are analyzed by millions of interconnected sensory particles provide evolutionary intelligence to avoid the possible collapse of K2-72e’s civilization.” 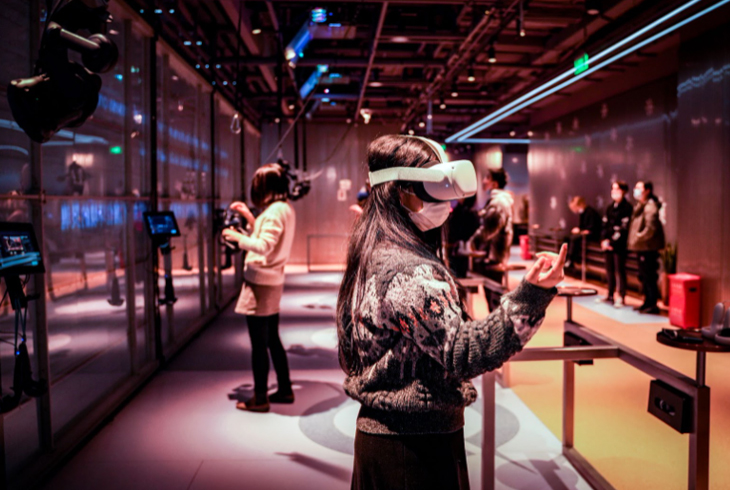 Hello Metaverse! students created a lane of VR experiences for the exhibition. With VR headsets on, users entered the Black Sun project–a virtual space created by students that is navigable by hand gestures, where players can interact with each other by exchanging virtual objects and build their own virtual rooms.

“The aim of the Black Sun is to consider how communications of our daily lives have been shifting to virtual spaces in which alternative realities and experiences are possible,” Clinical Instructor of IMA Ian Xingchen Zhang said.

Hello Metaverse! was open to junior and senior IMA majors, and those enrolled received specialized software and Oculus Quest 2 virtual reality headsets—the tools they used all semester to develop their own interactive immersive content as their understanding of the possibilities of a metaverse expanded over the course of the semester.

For both courses, “Invisible Cities” was a promising first collaboration. “This is definitely something that we will consider strongly in the future, as in certain occasions, beautiful mixes between different courses may demonstrate original and inspiring outcomes,” Didakis said.