At the close of the Fall semester, Charlene Visconti will be departing her role as Dean of Students after nearly six years in Shanghai, in addition to over a decade in student advising at NYU New York. Stepping into the Dean of Students role is David Pe, who has served as Associate Dean of Students since 2013. David joined NYU Shanghai in 2012, after more than eight years working in Student Life in NYU New York.

Shortly before the campus gathered to wish Charlene farewell on December 12, University Communications sat down with the deans to talk about some of their favorite moments at NYU Shanghai, and what’s next on the horizon.

Both of you have spent many years in Shanghai. What’s your favorite part of living in the city? Charlene, what do you think you’ll miss most about Shanghai?

Charlene: I've actually thought about this a lot because, as I'm leaving, people ask me this question. Living here in China really has altered my worldview and expanded it. And that was not something I would have expected could happen to me at this stage of my life, to this great an extent. It’s really helped me understand that there's lots of different ways to be in the world, and lots of different ways to grow.

David: I’ve lived in Shanghai for eight years now, and what I love most is the constant development of the city and the fact that it's still moving and growing while being thoughtful of all its potential and possibilities. I'm pretty sure there's some really great plan out there that I've just never seen, but feeling like you’re living in this sphere of the unknown is quite exciting. Shanghai is continuously evolving in terms of its culture, its people, its physical infrastructure, its emotional space – this place is constantly on the move, and you don’t know where it’s taking you next.

You’ve seen the university grow and change a lot, too, over the course of your time here. Through all those changes, what have you come to love most about your work here at NYU Shanghai?

Charlene: First of all, the Student Life staff is one of the most cohesive, hardworking groups of people I've ever worked with. I’ve worked with students for a long time and in a lot of different ways, and I think what's different about so many of the students here is how risk-taking they are. They're willing to shake things up a little bit and consider new possibilities. I find that that makes working with them so very interesting and rewarding.

David: I think the size of this community allows for a lot more interaction and a lot more of really getting to know students, to be able to celebrate with them what they accomplish and achieve, but also to reflect with them when they struggle and need some guidance and direction.

You get to really see the moment that they enter on that first day of freshman orientation, and then you get to really witness their growth all the way through to commencement. You don't really get that at other universities. So we’re able to give everyone some sort of space to grow and interact with the university in a lot of different capacities and at a very human level. Ultimately, we want to let students write their own developmental arc that other members of the community can witness and share with them, and hopefully those stories can inspire people to continue building community and continue to create their own journeys.

Charlene: That’s such a good distinction! One of my favorite parts of that has always been witnessing the friendships that develop between students, and some of them are the most unusual friendships! When they tell you that they are starting to room with this student or that, or this friend of theirs came and spent the whole summer with them, it's almost always two people you would never put together. And I find that so refreshing. 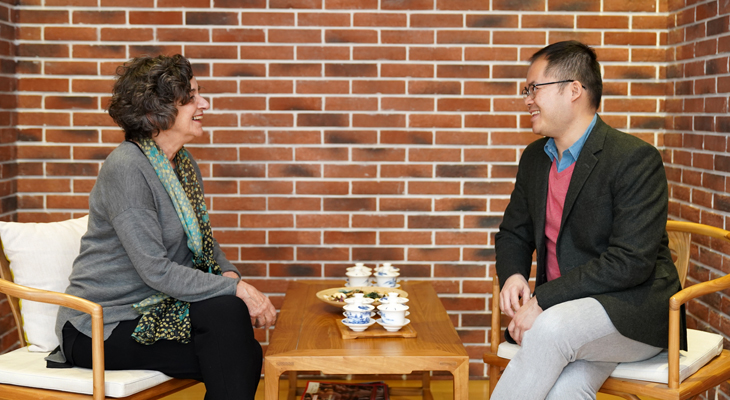 In the six years that you’ve worked together, what project or accomplishment are you most proud of?

David: That’s too hard! We can't pick one - it's almost like asking us to pick from one of our seven babies!

Charlene: It's not so much that we have had a particular success that we're most proud of, although I did really have fun at Book It With the Deans [a book club for students to connect with the various deans].  I think it's more that we’ve developed a very productive style - a culture, really - of working together. We often ask when we're making a decision, “Okay, this is going to impact this group of students positively and this group of students positively. Is there a group of students that this will hurt?” I think that's the embodiment of our consensus style – it’s really about getting enough people around the table so that you don't make the mistake of negatively impacting somebody, or some group, unintentionally.

David: Yeah, I'm really proud that our policies and our practice aren’t guided just by our experience from a Western, U.S. context, or just because this is how it's done in China. We can’t allow that to be the reason why we don't explore potential other options. And that’s what makes it possible for us to witness a lot of moments where we have achieved our mission of inter-cultural engagement.

So what’s next for the two of you?

Charlene: I’m going to spend some time with my growing family in New York - I’ve gained two new grandchildren since I moved to Shanghai - but I don’t really want to stop working with students, so I’m definitely not retiring yet! We’ll see!

David: I think Charlene and I have both been able to intimately curate the things we want to see in the student experience in many ways, so now I’m looking forward to exploring some of the things that we always talked about wanting to do. So we just launched the First Generation initiative, and we just launched Book It With the Deans. Those are part of this bigger project to find more intimate ways to engage with students at the smaller level and ask the right questions to bring students from different perspectives together into the same space.

We always say we want to commit to building small, intimate communities where students interact with us in novel ways. So I think that’s my task moving forward, and where I think I'm going to be continuing part two of this journey.