Scholars Gather to Reflect on China-U.S. Alliance in WWII

December 2021 marks the 80th anniversary of China and the United States becoming World War II allies. To commemorate this often overlooked chapter of history, the NYU Shanghai-ECNU Center on Global History, Economy, and Culture joined forces with the Cornell Club of Shanghai to host a forum, “Hope in Times of Challenge: Reflections on China-U.S. Alliance in WWII” on December 8. The event brought together renowned historians and international relations experts from China and around the globe to reflect on the lessons of the past and how they might inform present-day U.S.-China relations.

About 200 participants signed in from around the world as the panelists shared their perspectives and largely agreed that today, just like in the past, cooperation would greatly benefit both China and the U.S., while confrontation will serve neither.  Zhang Baijia, former Vice Director of the Chinese Communist Party (CCP) History Research Institute, opened the discussion by outlining the wartime policies of the Kuomintang (KMT), the CCP, and the United States. “Although the contradictions among the policies of the three parties presented Sino-American cooperation with difficulties,” Zhang said, “the China-U.S. alliance played a vital role in the eventual defeat of Japan, which stands as a significant and forever memorable chapter in the history of Chinese-American relations.” 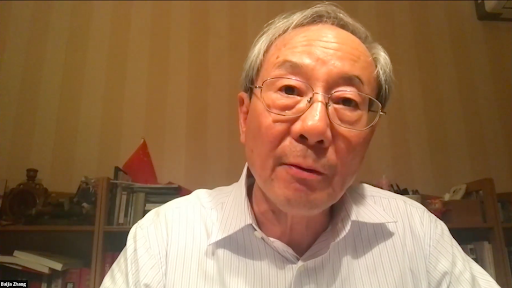 Oxford University Professor of the History and Politics of Modern China Rana Mitter observed how China’s role in World War II history is not prominent in the minds of many Americans. “When considering World War II, every country tends to think about its own history. China will think about Yan’an and Chongqing, Britain will think about the Blitz on London, and the United States will think about its own immense efforts to liberate Europe and the Pacific,” Mitter said. “The war in Asia-Pacific has been seen in American popular culture, particularly in television and film. Yet every time, China, as it seems, is rather excluded from that overall story.”

Mitter noted, however, that since the 1980s, Chinese scholars have placed increasing emphasis on educating the public about China’s contributions in WWII. International academia has also made more efforts to explore China’s significant role in the war against global fascism, gradually coming to recognize the country’s  prominent place in WWII history. In these challenging times of international relations today, Mitter emphasized, the most important WWII memory for any country should be the history of internationalism, while “collaboration and education have to be at the center of our efforts.” Rana Mitter, Professor of the History and Politics of Modern China at Oxford University.

Today’s world in many ways parallels the world during World War II, noted Yale University Professor of History Odd Arne Westad. In the 1930s, the world was confronted with fascist aggression, and it was such an “existential threat” that it drove countries with very different characteristics to become close anti-fascist allies in the war. Today, the world is once again facing such existential crises as the Covid-19 pandemic and climate change, which are not just challenges to a single country, but daunting challenges to the survival of all mankind.

Drawing on the history of the China-U.S. wartime alliance, Westad stressed that three lessons should be given special attention: policies must be pragmatic, priorities must be clearly distinguished in dealing with international and domestic issues, and countries must focus on long-term developments instead of short-term considerations. “The China-U.S. cooperation does not have to be on every issue, but there must be cooperation on major global events,” Westad said. During China’s War of Resistance, despite all the contradictions and differences between the CCP, the KMT and the U.S., they all treated anti-fascism and resistance to Japanese aggression as the top priority. This is the main insight that people today need to gain from the past, Westad contended. 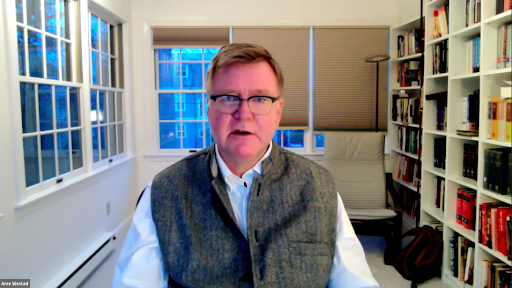 Professor of International Relations at Peking University Niu Jun shared several insights from his study of the CCP’s active alliance policy with the U.S. between 1944 and 1945. Niu contended that after China and the U.S. became allies and as CCP leaders pursued an anti-Japanese united front with the U.S., China’s relationship with the U.S.  developed positively. CCP-U.S. cooperation during the war, albeit brief, still sowed the seeds for the Chinese-American rapprochement in the early 1970s. 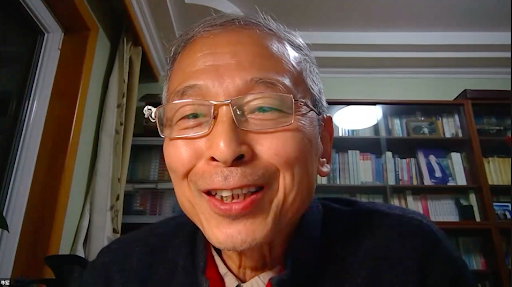 Distinguished Global Network Professor of History at NYU Shanghai and NYU Chen Jian emphasized the significance of the Sino-American wartime alliance in shaping the existing world order. The “liberal world order” embodies both liberal values and anti-imperialism and anti-colonialism, as shown in the Fourteen Points presented by U.S. President Woodrow Wilson after WWI and the Atlantic Charter issued by U.S. President Roosevelt and British Prime Minister Winston Churchill in August 1941. The undertone of Chinese-American cooperation – not only as wartime allies but also founding members of the United Nations –  was clearly reflected in the Shanghai Communiqué of 1972, which articulated a series of differences between China and the U.S. while highlighting numerous consensuses between them at the level of international norms and rules. So, “it is entirely possible for China and the U.S. to achieve ‘peace with disagreements,’” Chen contended. 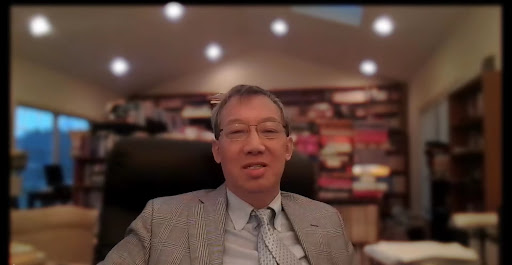 Former President of the American Chamber of Commerce in Shanghai Kenneth Jarrett added perspective from his long career working with U.S. businesses in China. He noted that although U.S.-China relations are “stuck in a period of great uncertainty” that may continue for some time to come, it is undesirable to “focus entirely on the negative and lose sight of what has occurred in the past.” It is important to “remember our history to make people more aware of how the two countries have positively worked together in the past, which will help us as we try to forge a new path forward,” Jarrett said. 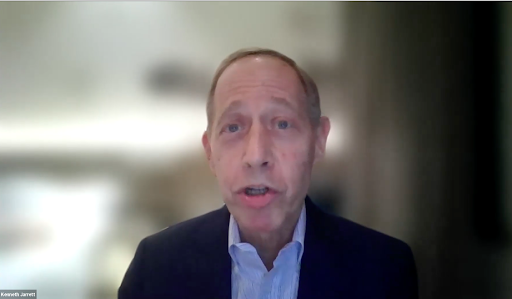 Kenneth Jarrett, Former President of the American Chamber of Commerce in Shanghai

Provost Joanna Waley-Cohen, who moderated the panel, closed the event with a quote from an NYU Shanghai student who was interviewed recently on Chinese television.  “What he said was, ‘What I’ve learned at NYU Shanghai is that we are all human.’ And I think that's a good point to bear in mind,” Waley-Cohen said.