Leading Chinese and international neuroscientists, economists and psychologists gathered at NYU Shanghai November 14 to workshop the latest research in the young and growing field of neuroeconomics, the study of how economic decisions are made inside the human brain.

Organized by the NYU-ECNU Institute of Brain and Cognitive Science at NYU Shanghai, the workshop was also attended by some 60 junior university researchers in neuroscience from around China.

NYU Shanghai was the most appropriate host for the workshop since the 20-year old field of neuroeconomics was largely created at NYU, and NYU Shanghai is now home to one of the leading neuroeconomics groups in China, said Paul Glimcher, Julius Silver Professor of Neural Science, Economics, and Psychology at New York University, as he kicked off the morning session. 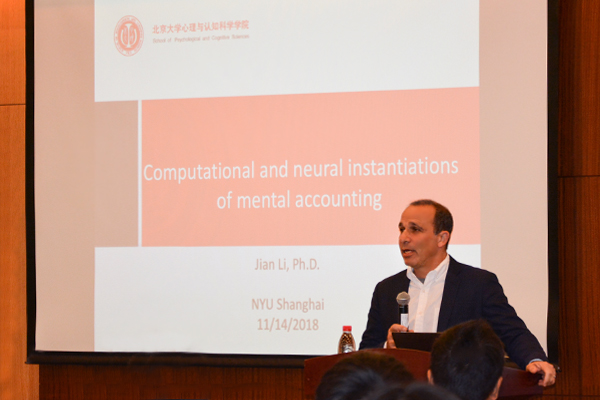 Over the years, the NYU-ECNU Institute has served as a regular convener for the neuroeconomics research community in Asia and beyond. In 2014, NYU and NYU Shanghai organized a Kavli Futures Symposium on Neuroeconomics in China and Asia with the internationally renowned Kavli Foundation, bringing together an international cohort of junior investigators in the field of neuroeconomics. This year’s workshop was organized to bring this network of scientists back to Century Avenue for an update of their research progress and to exchange new ideas.

The institute also hosts the oldest and largest professional summer course in neuroeconomics biennially. In previous years, the institute has also hosted a monthly neuroeconomics colloquium series. An organizer of the workshop, Cai Xinying, assistant professor of neural and cognitive sciences at NYU Shanghai, said neuroeconomics is more than simply the sum of its parts, as combining theoretical and empirical accomplishments of both disciplines can yield significant added value.

“Economics provides a formal, mathematically tractable model of human choice behavior that allows neuroscientists to study whether and how mathematical constructs such as value are actually encoded in the brain. On the other hand, neuroscience informs economists what human brain can or cannot do, which help economists construct more realistic models better describing and predicting human choice behavior,” he added.

At the workshop, Professor Li Jian of Peking University presented his study on the cognitive mechanisms underlying risky decision making. His work shows how money already spent can lead individuals and companies to continue down bad paths, even when it is obvious that those paths are bad.

“We adopted two experimental paradigms to study how individual differences in personality and cognition were manifested in the neural activity patterns and behavioral preferences. Specifically, individuals’ sensitivity towards loss prospect were modulated both by previously incurred losses and their greed personality scales,” Li said.

Cai Xinying, assistant professor of neural and cognitive sciences at NYU Shanghai, presented his findings on the differential contributions of the lateral intraparietal area (LIP) of the cortex to reward guided choice.

His study showed preliminary evidence suggesting that the anterior and posterior sub-divisions of LIP seem to contribute differently to reward guided choice. This observation may reveal previously hidden structure in hundreds of previous studies going back two decades, and suggests new avenues of research for neurobiologists working in the cortex.

“Our findings have significant implications in reconciling previous seemingly contradictory conclusions on the role of LIP in reward guided choice,” he said.

Evgeniya Lukinova, a postdoctoral fellow at NYU Shanghai, presented her research titled Time Preferences are Reliable but Adapted to Temporal Context, on the correlation between academic measures of patience and delay-discounting and real life behaviors. 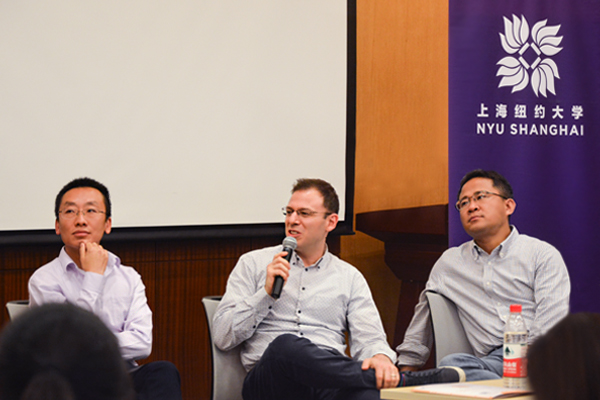