With COVID-19 preventing NYU Tisch’s graduate students in its Interactive Telecommunications Program (ITP) from studying in Brooklyn this year and showing off their final projects in exhibition spaces in New York City, 17 China-based ITP students enrolled in NYU Shanghai’s Go Local program have decided to do the next best thing: stage their own live show in Shanghai.

ITP is a two-year graduate program at the Tisch School of the Arts where students explore the imaginative use of communications technologies, and how they might augment, improve, and bring joy to people’s lives. ITP’s Spring Show is an annual tradition in New York, but has been held online for the last two years. 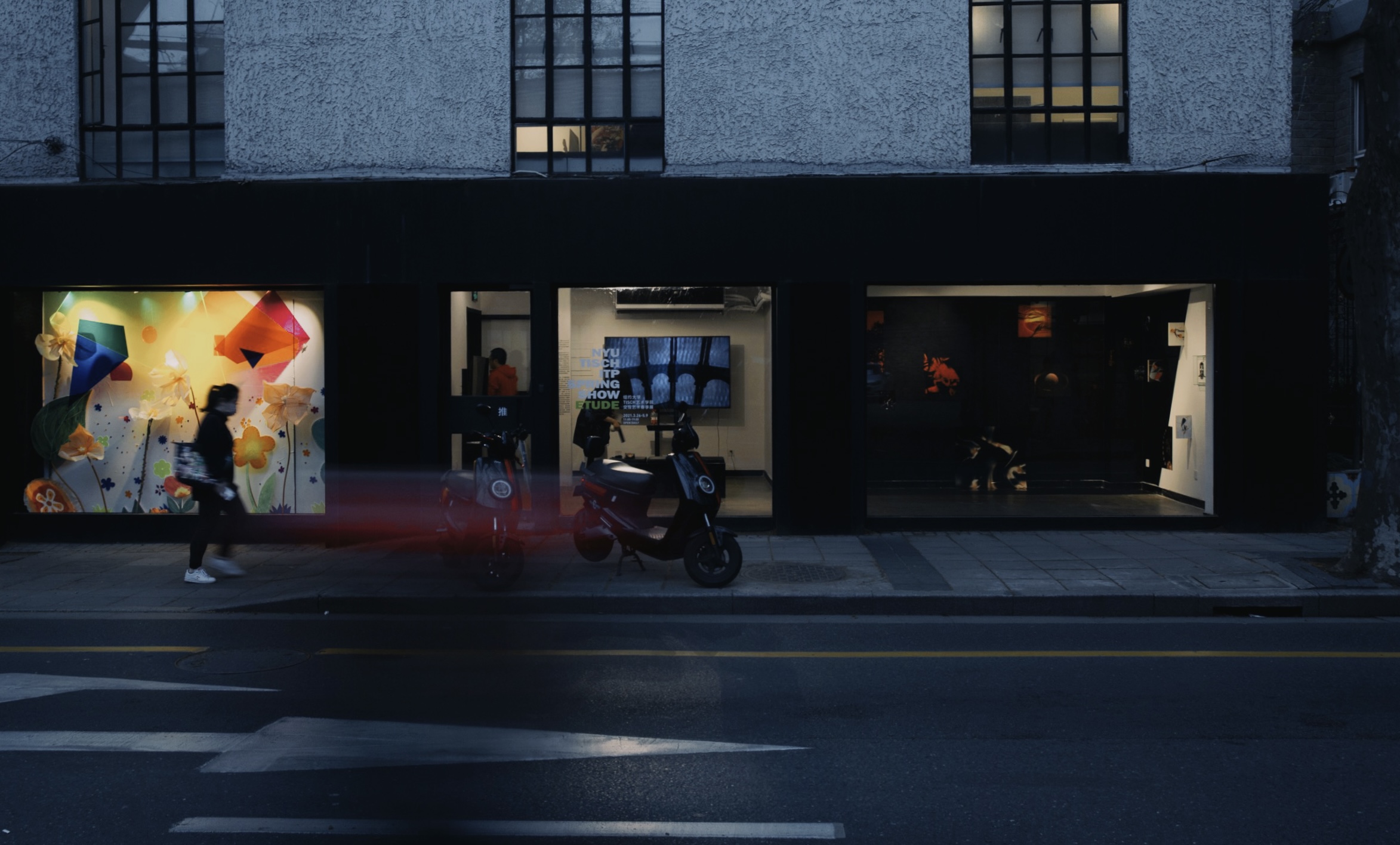 A street view of the gallery on Wulumuqi South Road.

“Originally, we planned to only participate in the online show, but after some thought, we realized that we wanted to create a chance for everyone to meet in person this spring,” said Echo Tang, NYU MPS '22 from Guangzhou, one of the show’s curators and featured artists. “We wanted to enjoy this moment, be together, and practice sharing our art. I’m so grateful that NYU Shanghai helped to make our first show happen in-person during a time when most other artists around the world are having to do online shows.” 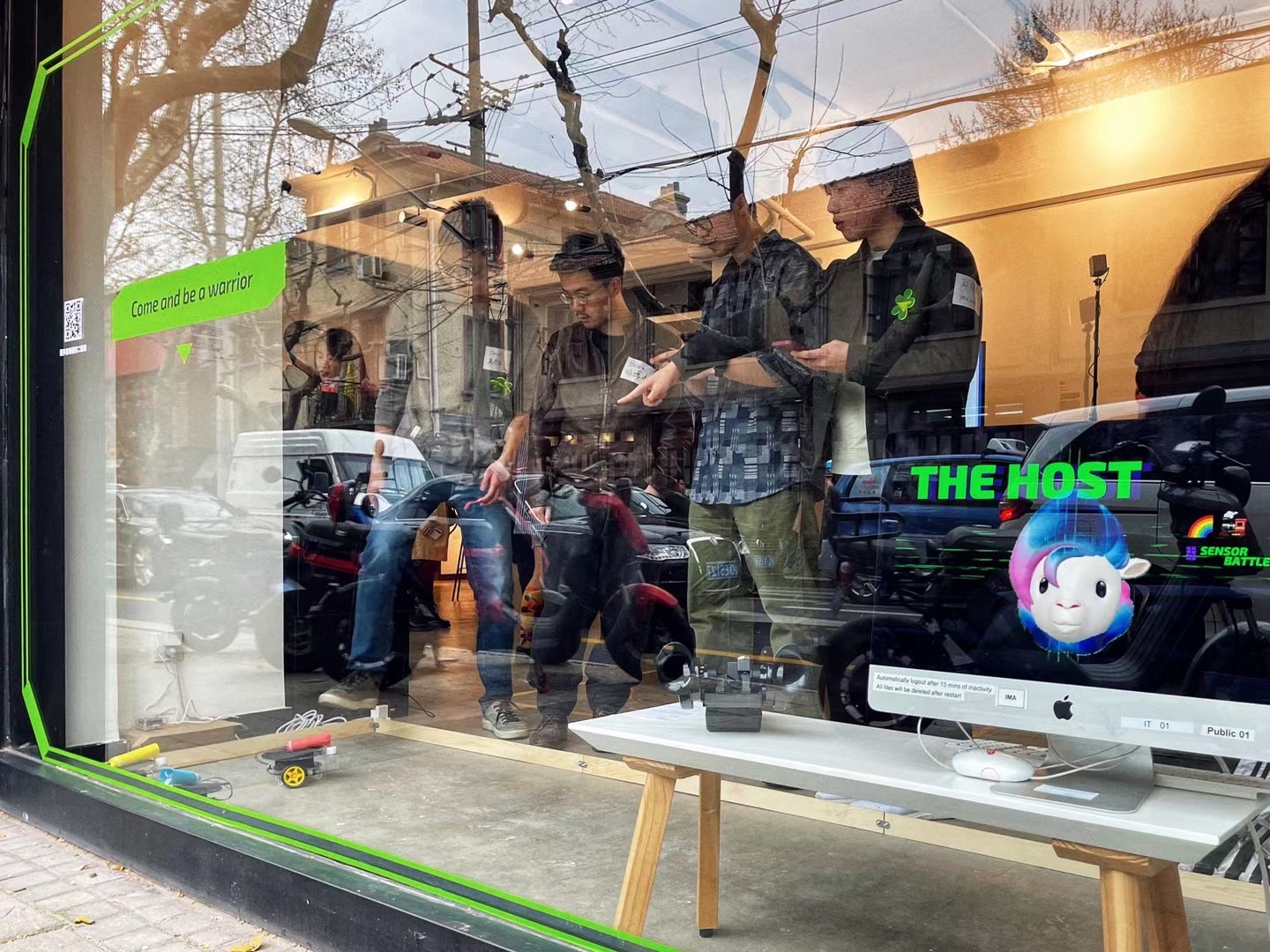 Students testing out “Sensor Battle,” a project designed by a five-person international team of students. “Sensor Battle” is an installation in which participants can use QR codes and phones to control little cars that fight and spray water.

With support from NYU Shanghai, including guidance from Visiting Associate Arts Professor Michael Naimark, and after months of preparation, the student-led show, Etude, debuted at the Anomaly OPEN Gallery in Shanghai’s Former French Concession. The show title, Etude – a French word meaning "study" – was inspired by the idea that the show represents a practice and exercise in art creation and curation. 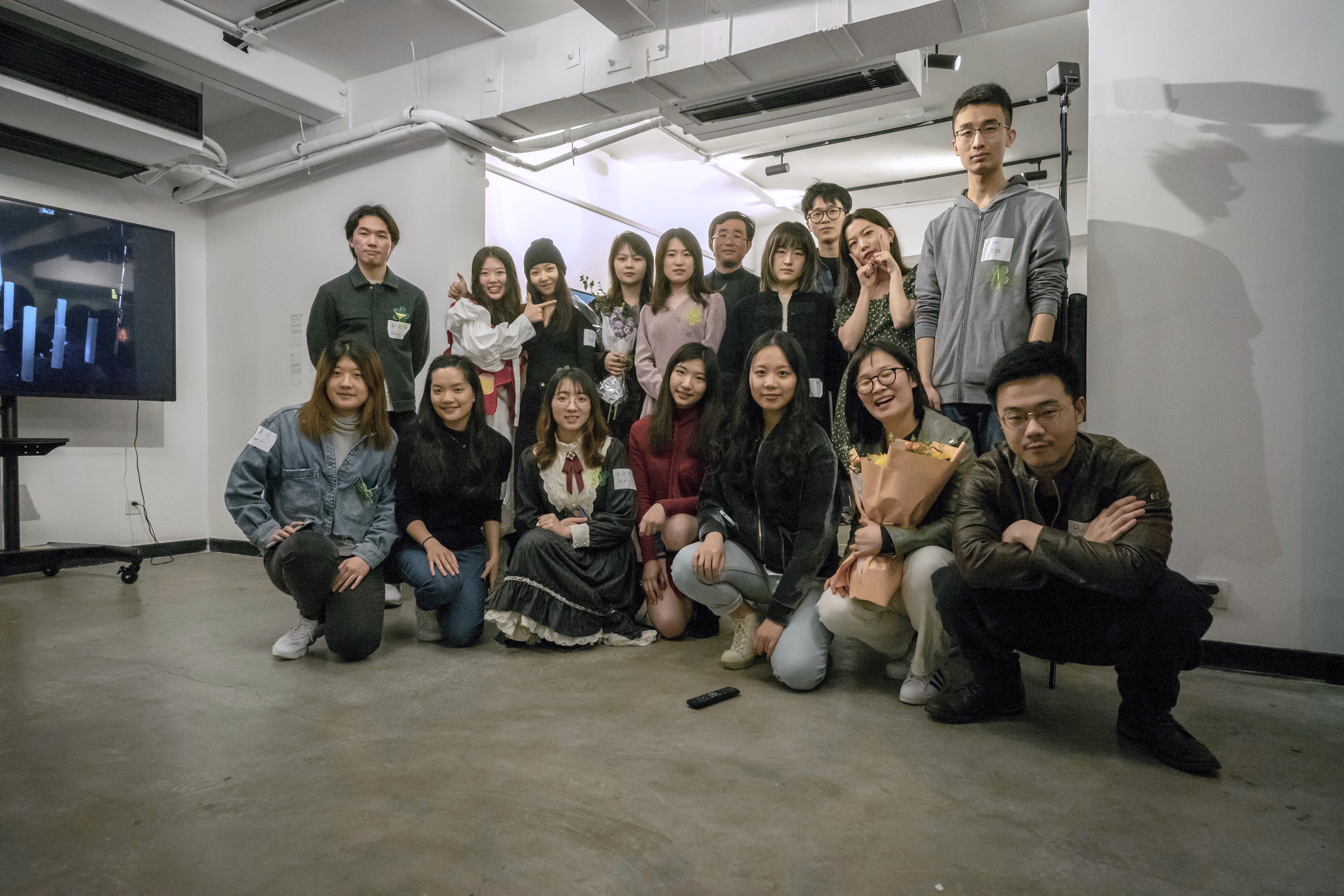 The 17 in-person ITP students at the gallery’s opening.

Etude features interactive, video, and graphic art. Projects range from a virtual reality light sanctuary, to an interactive music sheet with dancing notes, and a coded flower that blooms as a response to human voices.

“My classmates have backgrounds ranging from computer science, to politics, psychology, journalism, and fine arts. Their backgrounds are reflected in the projects you see,” said Marcel Wang, NYU MPS '22 from Chongqing, another one of the show’s curators and featured artists. 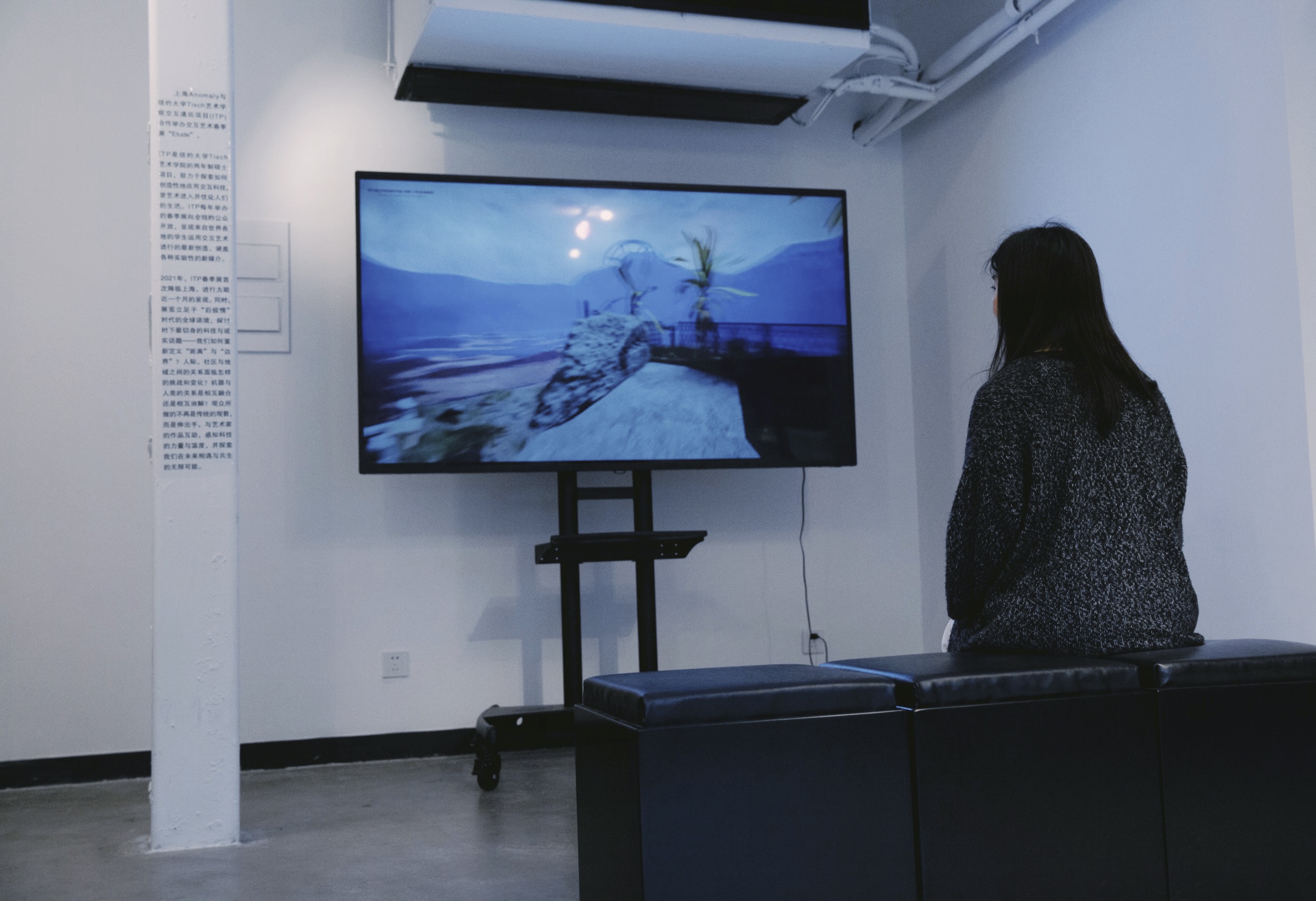 A visitor engages with a VR project entitled “The Sewing Machine,” by Tinrey Wang, NYU MPS '22. Wang, who has a fashion background, was inspired by his memory of times working on his fashion projects. He would often take naps on his sewing machine, thus the piece aims to visualize the dreams he had during those naps.

Tang, who majored in computer science at the Chinese University of Hong Kong, Shenzhen, was the artist behind the exhibition's coded blooming flower. The project originated from a class she took last semester called “Intangible,” in which students were assigned to create a “Curious Cube” that could interact with the audience. “I designed my cube to respond to human voices. I invited audience members to read books to the cube or talk to it, and then the cube would grow a projected flower. If you stopped talking to it, it would die and return to nothing,” she explained. “I wanted to create a very simple experience for the audience to get away from TikTok, short videos, or very fragmented message flows in daily life and wanted to encourage them to try long verbal communication like reading books or having serious long conversations.” 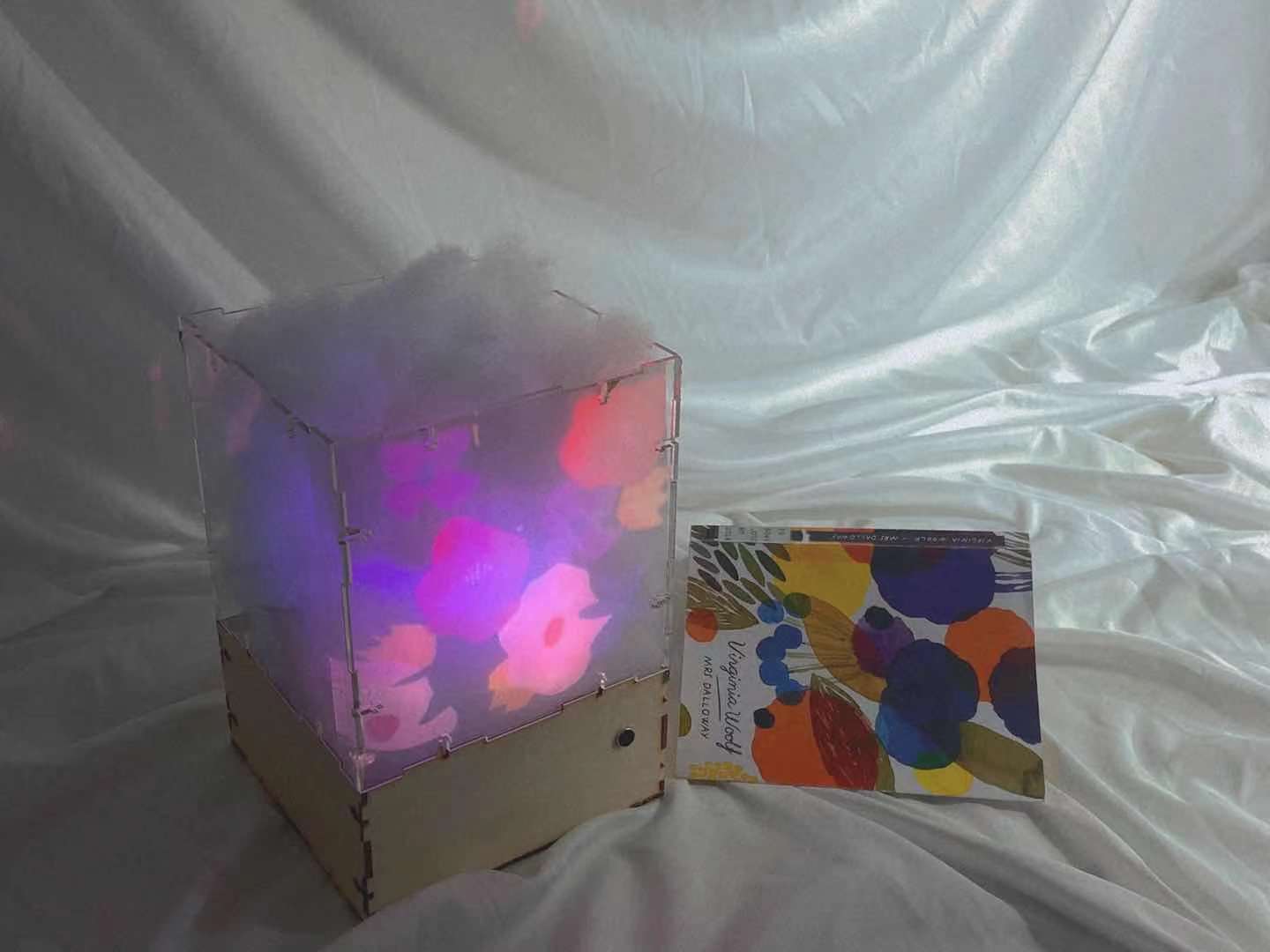 Echo Tang’s project, titled “Cube Clarissa” was coded to respond to human voices. She encouraged visitors to read books and talk to the flower, to help “water” and “nurture” it.

The first segment of the show ran March 26-29 and featured interactive art installations where visitors could both engage with the pieces, and chat with the artists about the installations. The second show segment, on display April 2-May 9, features video and graphic works where visitors can come and browse the videos, paintings, and photography illustrations more independently. 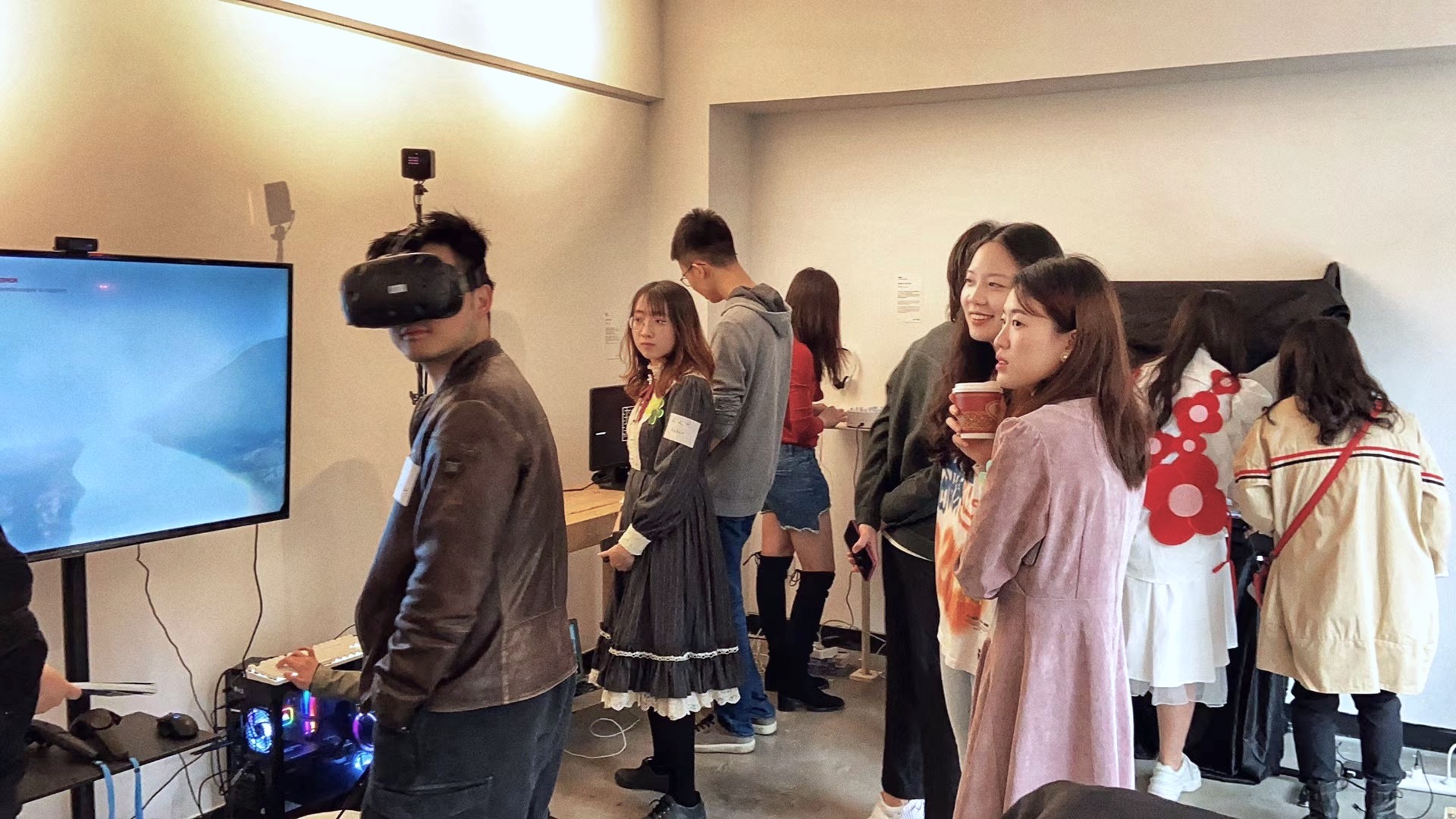 A visitor tries out Michelle Xu, NYU MPS '22's VR skydiving experience, “iWind.” With the goggles on,  participants fly through lakes and forests, and enjoy the feeling of flying. “As a paraglider, I am deeply obsessed with the feeling of flying in the wind,” Xu’s project description reads. “For most people though, the real world flying experience is too dangerous. Therefore, I constructed a virtual world using ‘Unreal engine’ [a 3D creation platform]. I hope users can feel the immersive flight experience by connecting the Arduino helmet, releasing the pressure of life, and dancing with the wind.”

“The experience of curating a show was very new to me, and was an experience I could never get from class study with my teachers or fellow classmates,” said Tang. “It’s helped me feel more connected to Shanghai –where I’m living now and the time I’m living in right now.”

Visitors are welcome to visit the gallery, which is free and open to the public until May 9th on 205 Wulumuqi South Road.