A new film by NYU Shanghai Associate Arts Professor Aly Rose exploring traditional Chinese Buddhist devotional life through the medium of dance for camera has been earning accolades from film festivals around the world.

“MONK” has earned Official Selection honors from 20 film festivals around the world, including the prestigious San Francisco Dance Film Festival and the Los Angeles Experimental Film Festival. The film earned an Honorable Mention for Best Short Film in the April 2019 Global Shorts competition, and was also named a finalist for best short film at the dance film festival Choreoscope and Out of the Can International Film Festival.

Shot in 2017 and completed in early 2019, the film was a truly collaborative effort between Rose, filmmaker Ni Ba (泥巴), the Hangzhou Nanshan Monastery (杭州南山讲寺) led by senior monk Changle Fashi (昌乐法师), and students and professors from NYU Shanghai. Students Cameron Lee Shetler ’20 and Amy Ernst ’20 both appeared in the film and acted as dance instructors for the monks who joined the project, while Assistant Arts Professor of Dance Tao Siye (陶思烨) performed in the film and assisted in the editing process. Study away student Charcy Ye  NYU ’19 also worked extensively with the monks prior to filming to train them in the foundations of movement and dance.

The 17-minute film follows one monk’s internal journey from his arrival at the monastery as a young man to his process of embracing the end of his worldly life as an elderly monk. Rather than use a more traditional documentary storytelling style, Rose persuaded co-producer Changle Fashi to abandon dialogue in the film. Instead, the collaborators used movement and imagery to evoke the meditative dimensions of monks’ personal struggles to adapt to and embrace a spiritually contemplative way of life.

“I wanted to tell the story in an abstract way that gave us the poetic license to make beautiful images dance,” Rose said. “These images allow us to expand the individual story, exploring the spiritual journey through symbolism and metaphor in each of the five acts.” Cameras capture the monks of the Hangzhou Nanshan Monastery processing past a mountainside in a scene from the second act of “MONK.”

One of the biggest factors earning international acclaim for the film is the project’s use of actual monks as the majority of the principal dancers. For Rose, the challenge of working with subjects who lacked any prior experience in dance was part of what made the project both attractive and rewarding.

“I believe that all human beings have the ability to dance and to express, and we all have the ability to refine our work enough in our own way to be able to be on stage and to be seen,” said Rose. “But that’s not to say that getting the monks to dance was not without its challenges.” 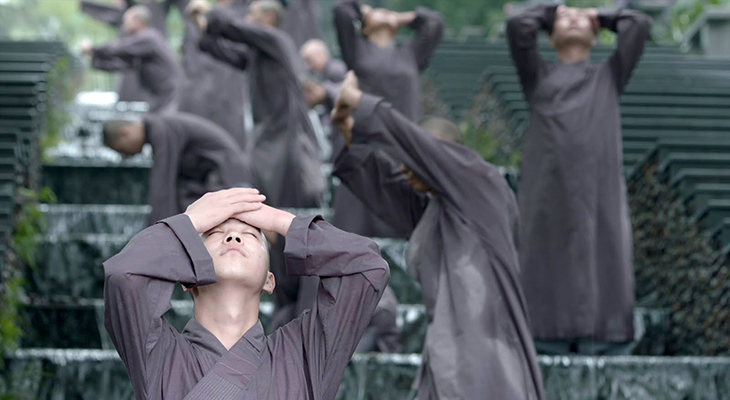 Several monks from Hangzhou Nanshan Monastery perform complex group choreography from the third act of “MONK,” the most challenging segment for dancers and filmmakers alike.

Professor Tao Siye spent a day living among the monks, in addition to rehearsing Rose’s choreography with them for hours on end during the week-long filming process. “At the beginning, we could sense that the monks felt uncomfortable when they touched others, especially the female dancers,” Tao recalled.

“The monks’ ages were also very different. There were some young monks who were 16 or 17, but then were also several much older monks – the oldest was 72,” Tao continued. “But for each of the dances, if just one person missed the count, we had to do everything again. In the end, they really had to learn how to work as a group.”

Amy Ernst ’20, who worked with the monks nearly 12 hours each day for a week during the filming process, says her time on set seemed to prove Rose’s philosophy to be true.

“Dancing was just not a common activity for them, but we only needed to open their minds and get them comfortable with the idea of them even being able to do it,” Ernst explains. “Once they think they can, then they can! We helped them get to that point with a lot of smiles and laughter.” Filmmakers and dancers gather for a group photo in the monastery’s main scripture reading hall (Tao and Rose stand in the center of the third row from the front).

Although the process of editing almost 100 hours of footage into a dance for camerawork was long and arduous for Rose and co-editor Adjunct Teaching Associate of Art Liu Chuting (刘楚婷), it did have an added benefit for the monks: They were able to see and enjoy their work in a way they could never have done with a live performance.

“The monks got so much joy at the end of the day when they saw the playback of themselves on camera,” said Rose. “It was surprising and rewarding for them to see themselves moving as a synchronized group.”

Screening the final cut for all of the monks who participated was a particularly moving moment, Rose said.

“Some of them cried when watching. They said it became so big and bold - they could not fathom that running up and down stairs or freezing in the water could be so elegant!”

Tao stressed the importance of the permanence and reflection that dance for camera offers as an art form. “When we perform live, you’re on the stage, and when you finish, it’s just gone. But when you do the dance for camera, you can have it for a long time,” she said.

“Unlike a simple dance recording, dance for camera is a whole new creative process. You can change what the audience sees, and you can even change the dance itself.” 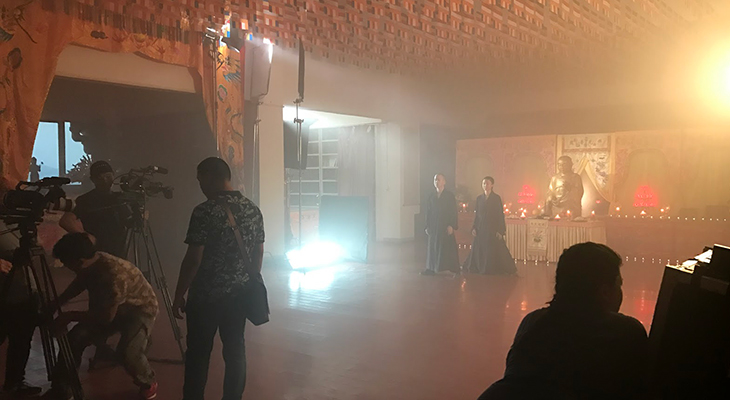 On set for the filming of the second act of “MONK”

Rose and the NYU Shanghai Dance program are already quite prolific, having completed 10 other dance for camera works that feature both students and professionals. But the success of “MONK” as a film has laid new foundations for the program’s new project, “An Angry Star,” which is being produced in collaboration with the Shanghai Museum of Glass.

“Dance for camera brings so much to the university and the community,” said Rose. “It’s such a gift to be able to introduce students to museums and their featured artists, and to allow students to put their names on pieces of video art that will be in museums for the next ten to 15 years.

“Students really mature by meeting members of the community and collaborating with them, and it has been truly amazing to see NYU Shanghai students get that opportunity through our screen dance projects,” Rose added. Cameron Lee Shetler ’20 (left) and Amy Ernst ’20 (right) pose with their “MONK” co-star Chang Jing (常静) (center), a young monk who played the character at the center of the film’s narrative.

Ernst, who will graduate this spring with a degree in Social Science, says her work with dance for camera at the university, especially her work on “MONK,” has left an indelible impression.

“Being able to interact with the monks and to see how lively they were in the way they interacted with each other – it was such an amazing experience that I don’t think I would have gotten anywhere else,” Ernst said.

“This is definitely an experience that I will keep with me for the rest of my life.”