Beings of Light: Dance and IMA Students and Faculty Collaborate on New Exhibition and More

From October 25 to November 7, the NYU Shanghai community can step into Beings of Light—a collaborative exhibition where hundreds of 3D models of dancers are suspended from the ceiling in a series of aerial formations. Guests can lay beneath the installation to consider the hundreds of curves, twists, and turns embedded in a single mid-air moment captured in each model.

The exhibition, at NYU Shanghai’s Gallery 1250, also features photos and video that tell how Dance and Interactive Media Arts (IMA) faculty and students collaborated over two semesters, creating 3D models to animate the grand finale of ‘The ONE Show,’ a large touring performance of sound, light, movement and flight that was first envisioned in 2005 by its creative director, NYU Shanghai Associate Arts Professor of Dance Aly Rose. The four-part show’s finale will involve 100 aerial dancers from all over the world performing on a hexagonal stage, and the Beings of Light exhibition showcases how NYU Shanghai students and faculty digitally animated the finale to be used as a 3D choreographic tool for the dancers. 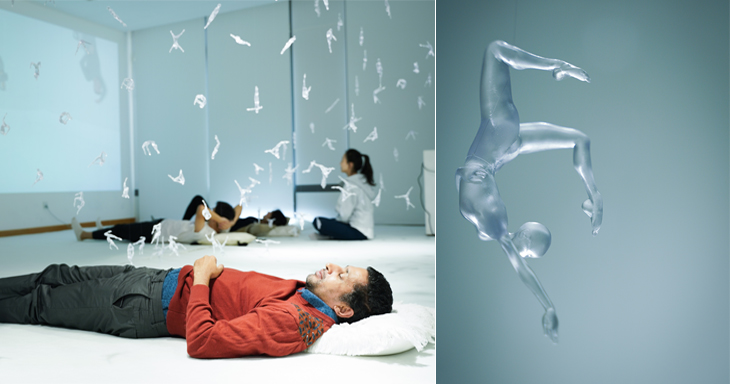 “This is a rare and exciting interdisciplinary opportunity which has so many applications in industry,” said Rose. “It combines art, technology, and dance in creating a world-first experience. The students at NYU Shanghai used the software Unity, usually used in gaming, to develop a 3D aerial choreographic tool, which is a world first.”

Each of the suspended figures in the gallery installation represent one of 150 unique poses created by artists Rose and Paul Siegel from 2010 to 2016. These poses became the foundation of the movement sequences choreographed for The ONE Show’s aerialists. This summer, the sequences from the show were recorded and motion captured using three professional aerialists, whose rehearsal footage also plays on a loop at the exhibition. The rehearsals were completely produced, managed, and filmed by NYU Shanghai students. 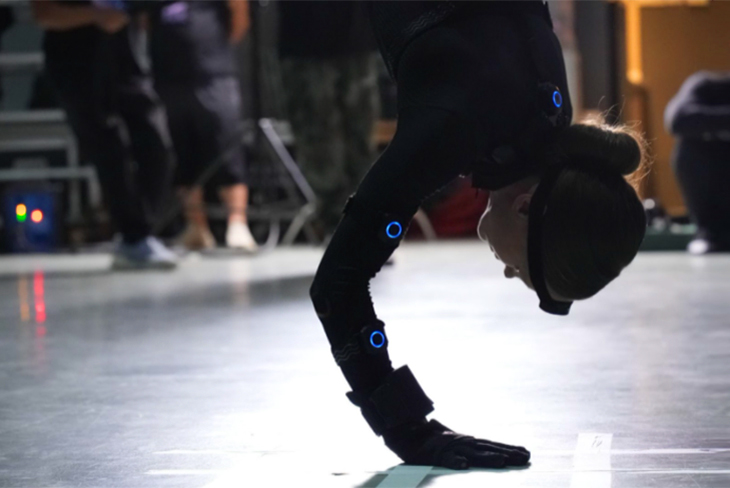 Aerialists were outfitted with Noitom neuron motion perception suits and sensors that recorded their movements. The recorded data is currently being input into a mass morphing animation of the finale created by NYU Shanghai students in 2020.

Maggie Liang Xiao ’22, a humanities major minoring in dance, helped produce the summer aerial dance rehearsals—filming the dances, recording sequences, creating costumes, and managing the cues for the rigging crew - the workers who held the ropes that suspended the aerialists in the air. “The dancers and the riggers are equally important collaborators of the entire piece: the riggers have to lift them up and down smoothly and sometimes cleverly, to allow dancers to execute their phrases gracefully,” said Liang.

“Since aerial dance is very different from what the riggers are used to, such as stunts or circus, we took some time to adjust,” she said. “I still remember that there were several times when Professor Rose wanted the dancers to ‘melt like butter’ all the way from mid-air to the ground. I had to whisper, ‘Softly, softly lower them to the ground.’ And the riggers’ faces were so serious, eyes concentrating on the distance between the dancers’ bodies and the hard ground.”

Wang Yinqi ’22, a humanities major and dance minor, assisted with the rigs that the aerialists were suspended on. “Aerial dance is really hard to do and rare to see,” he said. “I think the opportunity to observe them dancing was really precious. After trying it myself, I realized that flying in the air is quite a challenging but wonderful experience that requires a lot of body strength. The cooperation of movement and breath is beautiful.”

Since last fall, a dedicated group of IMA students and faculty have been creating a virtual 3D teaching tool for the show’s dancers and choreographers. The exhibition displays their work of animating the virtual training models—and skinning them (attaching the mesh of a 3D model to its virtual skeleton to create a quality character animation), so that the 100 aerial dancers who are training for 'The ONE Show,’ can learn the grand finale. The mass morphing of the virtual models will help dancers visualize the piece in its entirety.

IMA major Ryan Yuan Zhouchen ’22  was one of the students working frame by frame to design and animate the 3D model dance formations using game engine software Unity. “To achieve the most spectacular performance, we kept adjusting the positions of all the dancers, and therefore created many new possibilities,” he said. “At first I created a formation for dancers to imitate a fountain, but after animating it, we decided it was more similar to an impressive and giant bird in flight.” 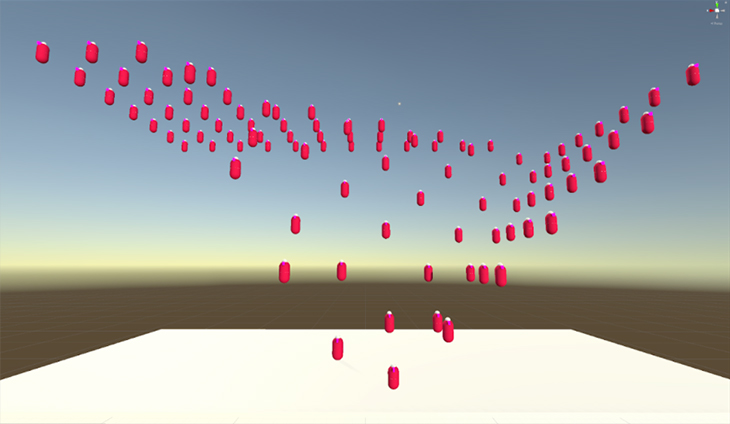 A still from the animated finale--each red capsule represents an aerial dancer. IMA faculty Ian Zhang is leading a team responsible for skinning the movement sequences recorded from rehearsals. The skinned models will eventually replace these ‘floating red pills.’

When it came time to set up the exhibition, Ana Xie Jingxuan ’24, a business and finance major, dedicated over 18 hours to helping to arrange the 200 suspended figures. “We were very serious about each model’s position, changing it until it found its exact right place, which took lots of time,” she said. “We needed to be patient and even a little obsessive about it. There’s a difference between imaginative theories and putting them into practice. My advice is don’t think too much, just do it.” 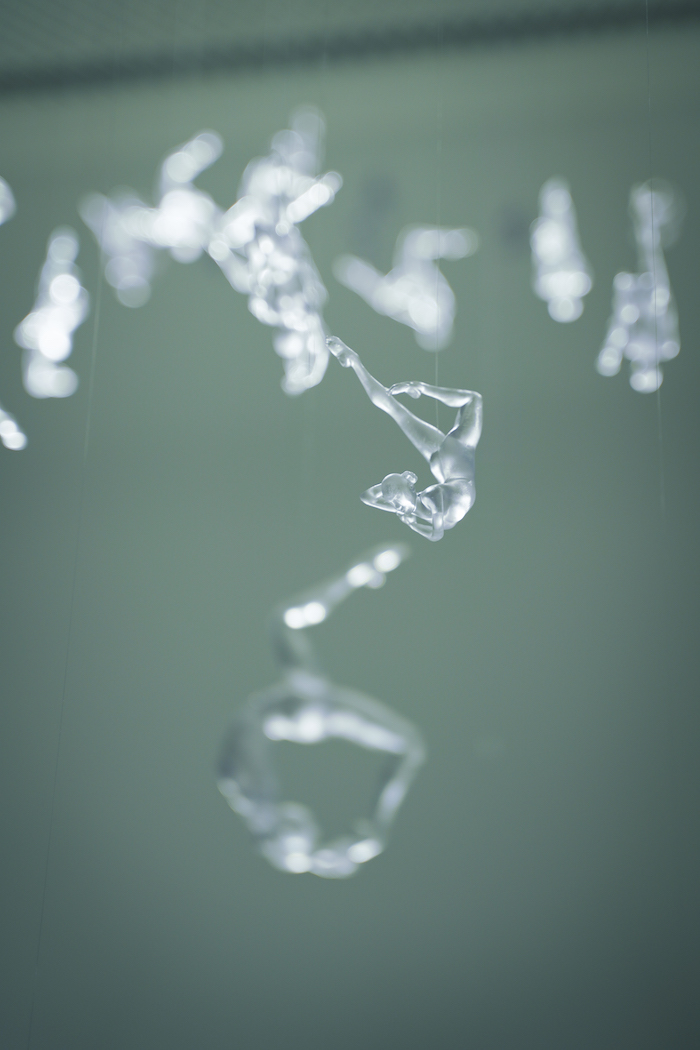 “When we go aerial, the body and mind create new bearings. Our center of gravity shifts within the body, and our point of reference is completely altered, moving 360 degrees with no floor. While spinning the body acclimates to this ‘new way of moving.’ These aerialists are like astronauts. This exhibition is inspired by their beauty,” said Rose.