Freshman year roommates Farheen Foad ’22 and Mao Jiayi ’22 reminisced over Zoom this summer about Sunday cafe cram-sessions, visiting each other’s hometowns, and returning to their dorm room every night knowing they had someone to talk to.  Sophomore year, Farheen signed up to be a resident assistant, so had her own room, but the pair have stayed close friends throughout their years at NYU Shanghai.

Getting to know each other 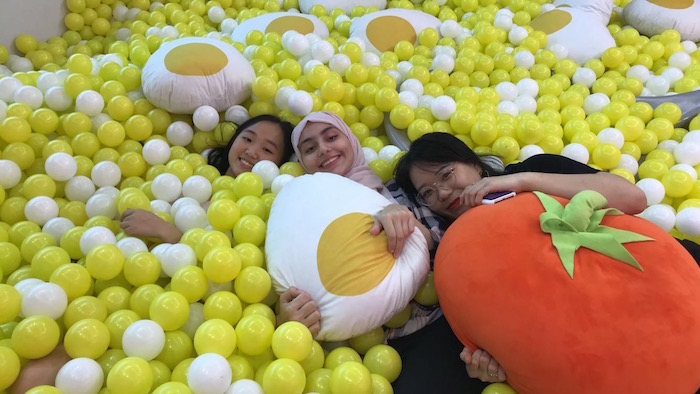 Jiayi: I remember when I first entered the dorm room, Farheen was not there, and I just picked the bed on the left side...

Farheen: I want to tell this story! We hadn’t decided who would sleep where, but I had my sights on the bed on the right. I had already put my booklet on the right side table, so she assumed that I picked that side. I thought she was a very nice and kind person.

Jiayi: There were several evenings that we spent talking about our Global Perspectives on Society (GPS)  homework. It was difficult for me, with a lot of strange words in the reading. Farheen and I would discuss our assignments and talk about how to write well and how to organize our writing. I thank the school for just ‘giving’ Farheen to me--she gives me the sense of being taken care of.

Farheen: Coming to NYU Shanghai and just having somebody welcoming during freshman year was so important for me. I am just grateful that I had Jasmine for that. Freshman year I was a bit distracted--busy making friends, going out--while Jasmine was still head-on in her studies. That really gave me a lot of motivation to stay focused.

Jiayi: Sometimes in Chinese culture, I feel we avoid confrontation and always try to keep everything harmonious. But Farheen told me early on that if we have any disagreements, we could just talk about it. I felt so lucky that we could be honest with each other. Farheen, give me a word here... Jiayi: I remember there would be nights before midterms or finals that I would reach out to Farheen and say, ‘Sweetie, I'm not going back to our room tonight because I need to study and stay on campus..." She always gave me an encouraging response, but later I found out that sometimes she was tired and she wanted someone to hear about her day--but I wasn't there!

Farheen: We both realized that things were coming between us, so we made it a thing to explore new cafes every Sunday--that way we could study and still spend time with each other. Other friends were shocked at how productive we were when we weren't on campus. Everyone who joined us found it to be productive, so we just started going all together. 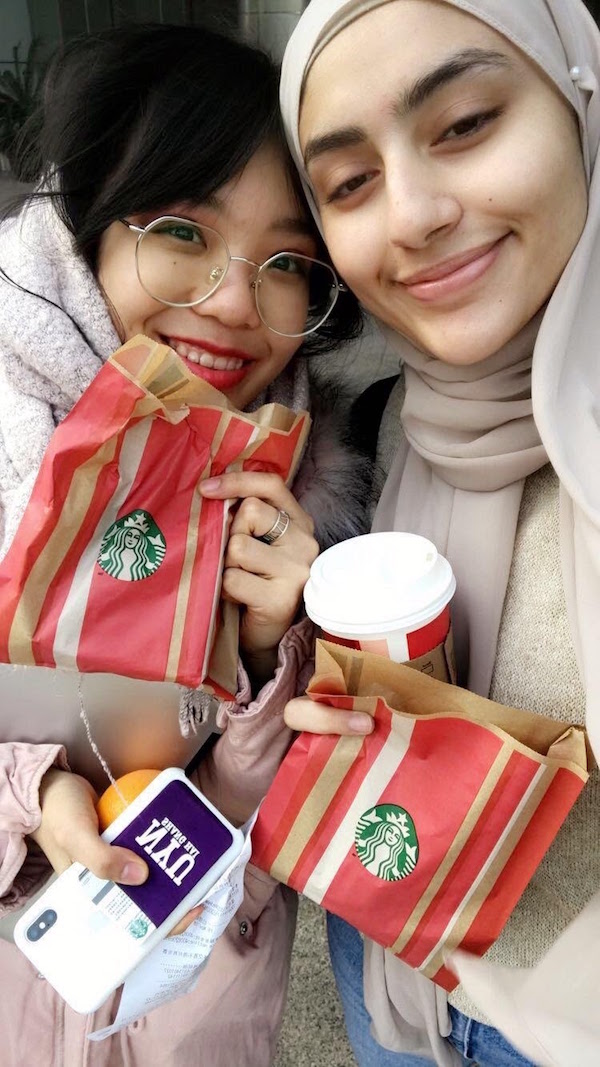 Learning to live with differences

Jiayi: I'm not a very neat person. Actually my bedroom right now is a total mess. This was true before I was rooming with Farheen, and it’s still true right now, but I think during my freshman year with Farheen, I at least improved a little bit. It’s true, my mother told me!

Farheen: I forced it down on you!

Jiayi: Farheen made us have a pact to clean our rooms every week. Thanks to her, my closet and my desk weren’t a mess all the time. 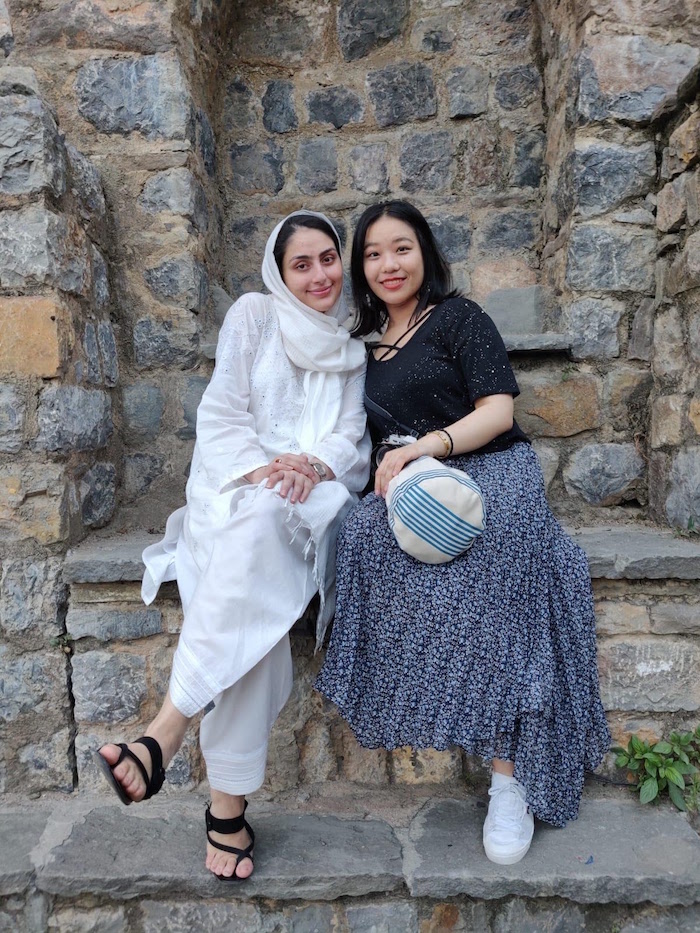 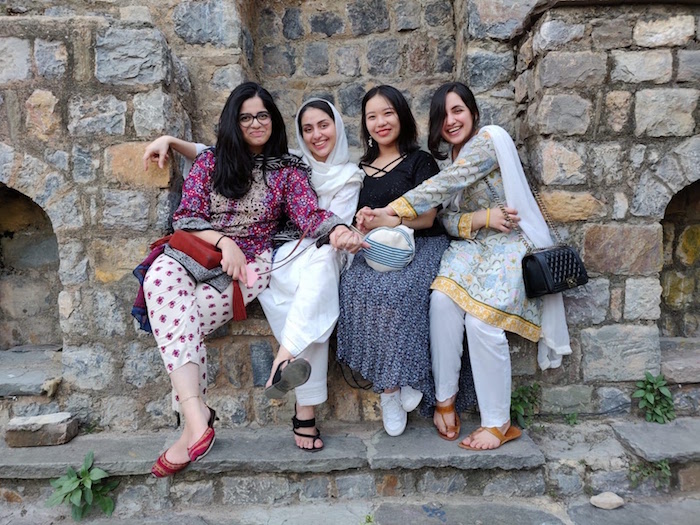 Jiayi: Farheen is a religious person, so it was mind-opening for me to see how she would pray really early in the morning. It was the first time in my life to be close to someone who holds religious beliefs.

Farheen: One of the prayers that I had was very early in the morning. My alarm would go off at 5 am so I could wake up and pray. During Ramadan, the month that Muslims fast, we wake up early to eat and then we don't eat for the whole day. Jasmine would see me wake up, making food at 4 am, and ask ‘What are you doing? How do you do that?’ I think that was kind of hard on her. I apologize if I ever disturbed your sleep!

Jiayi: When Farheen's parents visited, I got a chance to see how they prayed in the hotel before we went out for dinner. It came as a shock to me, but in a good way, how people can be so devoted and peaceful when they are praying. I would say that changed my mind about religious stuff. I would be more open to being accepting of people with religious beliefs.

From Zhuji to Karachi 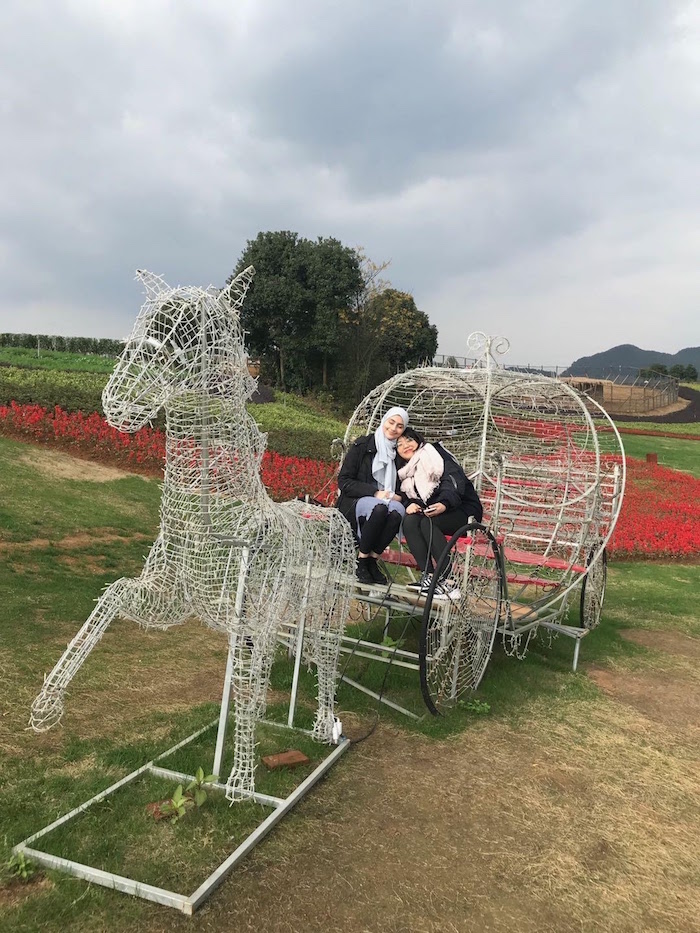 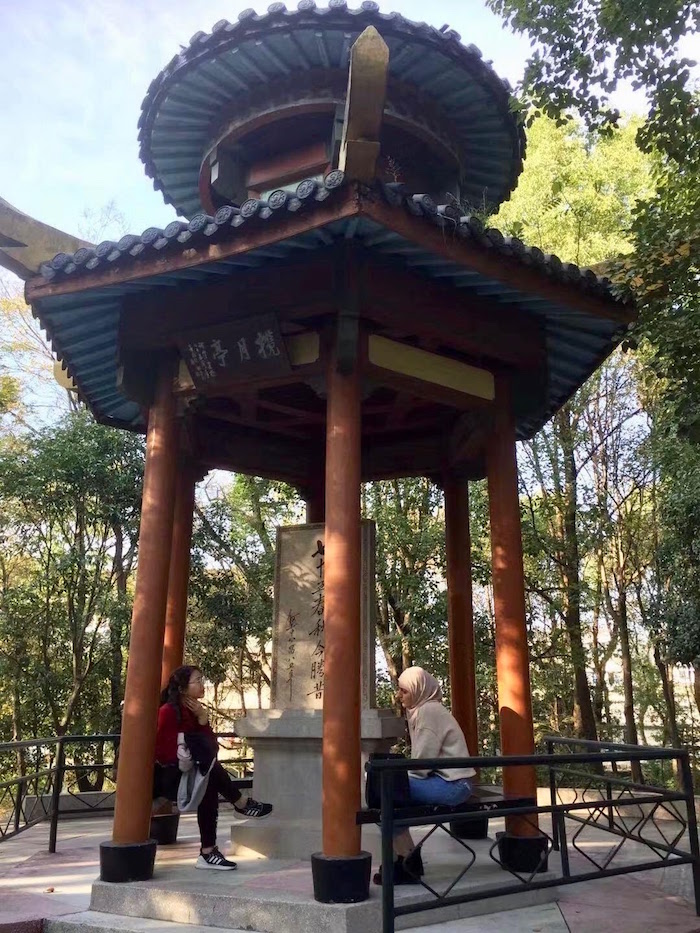 Farheen: I visited Jasmine’s hometown Zhuji, in the spring break of our first year. Her hometown is just beautiful. Her parents were always taking us out for food! It was very amazing that we were from different cultures but we have some things that are very similar in terms of taking care of others. Having dinner in Zhuji with Jiayi and her family

I saw how she was the baby of her family. She had grandparents and parents who were taking care of her, super pampered by like six different people. Where I come from, I have three different siblings, so we don't get that kind of attention. I admit I was a little envious. On a cross-country tour, Jiayi and Farheen stopped by Laif-ul-Malook, a mountainous lake in Naran Valley, located in northern Pakistan.

Jiayi: My experience in Pakistan was so good. I visited during a summer break. I asked Farheen a silly question the first day I arrived, “Is there any Starbucks here?” But they don't have Starbucks; they have their own tea that they drink every day.

Farheen: Tea is a big thing here in Pakistan. We went to tea houses, but I just had to take Jasmine to one of the only coffee shops in Karachi.

Jiayi: There are four siblings in Farheen's family and my mind was blown—her older brother and her younger sister look exactly like each other. And Farheen and their smallest sister look almost like twins! It was an amazing thing to me because I'm an only child in my family so I never had that experience. 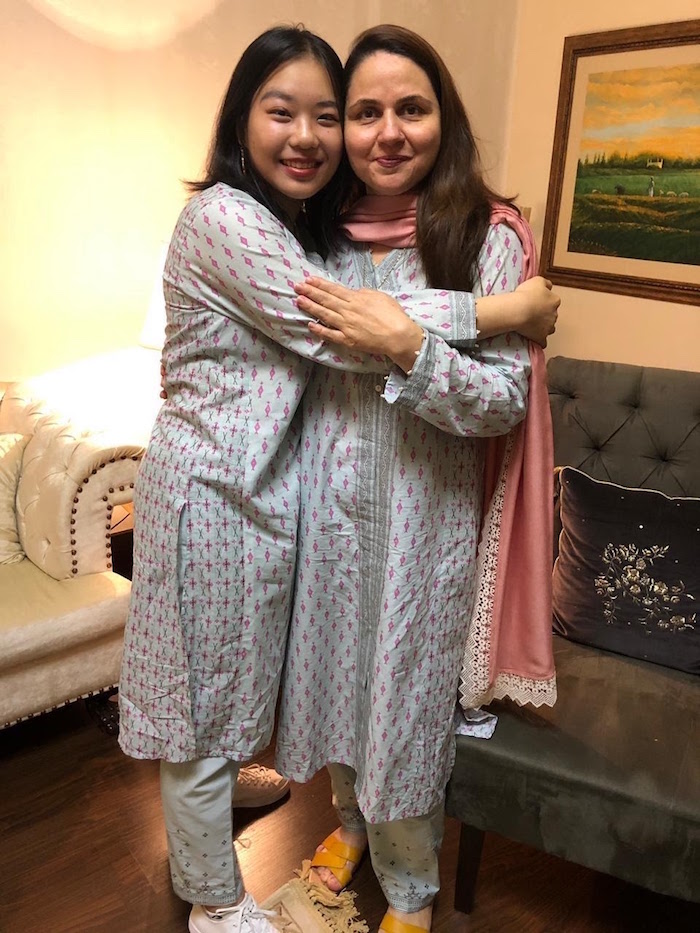 Farheen says her mother and Jiayi are very similar, personality-wise--they even have the same birthday. She wasn’t surprised when they ended up buying the same dress.

Jiayi: I've changed a lot because of Farheen. I was shy when I first came to campus and I tended to hide my opinions during class, during group discussions. Farheen gave me courage to speak up and even argue with the people I disagreed with, and I like that change.

Farheen: Especially being in college where you're figuring out who you are. Seeing somebody staying true to their morals and staying strong meant having an ideal person to look up to.

Jiayi: I'm a month older than her, but she's always taking care of me like an older sister. I love how she listens to me. She won't question my feelings but instead will be supportive. I think Farheen was the first person I informed that I was taking a gap year.

Farheen: I was really worried about her taking a gap year because that meant that we were going to be on different time schedules, but we always work out how to talk to each other, how to keep in touch. Jasmine's just one of the most genuine people I've met at NYU Shanghai, so I really value our friendship. And despite no matter how much time passes, I can call her any time and catch up, that's just how I feel.