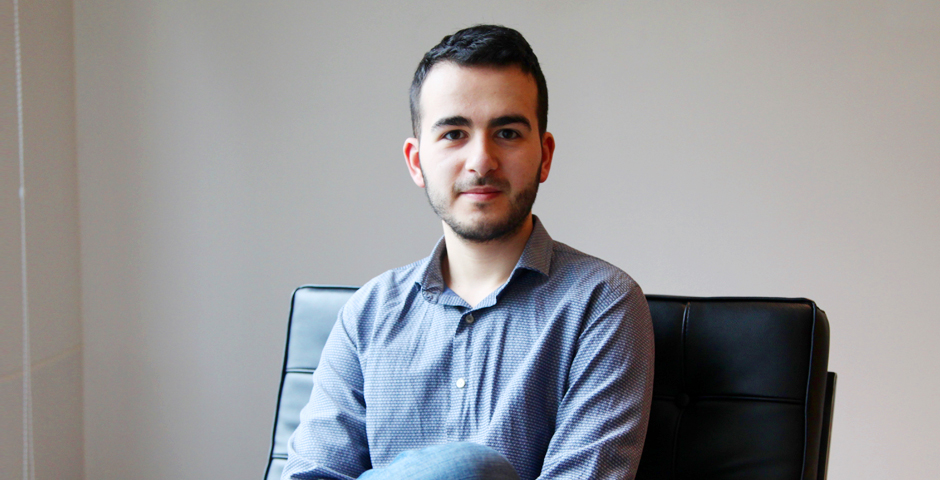 “NYU Shanghai is a very unique environment,” says Alexandru Grigoras ‘18 from Romania. “It has everything a traditional education could offer, but even more than that.”

Grigoras is double majoring in computer science and interactive media arts with a minor in social science. “I was pretty good at computer science, but I had all these other interests that I thought I should explore,” he said. “I was trying to figure out how to bring different disciplines together.”

“One course with Professor Andrea Jones-Rooy made me realize how excited I was to learn about the complexities of politics on an international level,” he says. “Similar to computer science, it's a very difficult-to-solve puzzle that requires a lot of logical reasoning.”

During his time at NYU Shanghai, Grigoras developed his passion for coding through creating a portraiture storytelling app called humans, organized a 24-hour hackathon, and started the University’s first computer-science-for-fun club—LOOP.

“At the time, our school didn't have a programming club, so we wanted to create one that would be beginner friendly,” Grigoras says. “It was mostly for students who either wanted to discover whether they had a passion for computer science or simply wanted to have more fun beyond their actual curriculum.”

After experiencing NYU Shanghai’s first hackathon during his freshman year, Grigoras also agreed to take over organizing the next HackShanghai event.

“It was a very challenging and interesting experience. At the time, it was our school’s biggest event,” he says. “Figuring out the logistics, raising the funds to bring students from all over the world, and hosting everything for 24 hours straight was madness. Nonetheless, it was a great success for our school.”

After graduation, Grigoras plans to move to San Francisco to start his ideal job as a software engineer for ridesharing company Uber. The company offered him a position after a successful summer internship during his junior year.

“It was such an amazing experience, and something I've always wanted to do,” he says. “I worked on developing a new system that makes it much simpler for customer service representatives to reach out to Uber users who have reported problems.”

“Being able to deal with any potential issues before they occur or as soon as they occur is very important,” Grigoras says, mentioning Uber’s top priorities of ensuring safety and identity verification.

Looking back on his college experience, Grigoras’ advice to incoming students is to explore all opportunities offered by the school, as well as venturing out to explore the city.

“What's really great about Shanghai,” he says, “is that it's overall a very safe place to go and just walk around. It's a very beautiful and interesting city. You can see very old houses right next to gigantic skyscrapers, and find hidden treasures everywhere, whether in the form of random restaurants, little stores, or distinct communities and neighborhoods. Just walking around and exploring it is amazing.”