The Institute for Contemporary Arts at NYU Shanghai (ICA) this week launched ponds among ponds, featuring the work of six artists from across Europe and China in the final installment of its interdisciplinary investigation of the human relationship with nature, The (Invisible) Garden.

Curated by Berlin-based guest curators Anna-Sophie Springer and Etienne Turpin, brings together film, sculpture, texts, sounds, performance, and even a petri dish of living bacteria cultivated in the NYU Shanghai campus’s laboratories to show us that the boundaries between the “human” and the “natural” are, in fact, imaginary. Whether the featured artists tell the story of Sichuan pear farmers taking on the work of now-extinct pollinating insects (Maximilian Prufer’s 2018 short film "A Gift From Him") or examine the centuries of cultural and botanical hybridization behind the spice trade ("Diasporae" by Anne Duk Hee Jordan with Pauline Doutreluingne), they are all asking us to view ourselves as part of “symbiotic webs” of organisms that grow, change, and adapt together.

The exhibition is inspired by the ideas of biologist Lynn Margulis, who argued that the primary force behind evolution is the development of symbiotic relationships, not competition for limited resources as Charles Darwin theorized. From the 1960s until her death in 2011, Margulis fought against the dominance of neo-Darwinian competition-based theories, citing evidence that key parts of plant and animal cells - specifically mitochondria and chloroplasts - were originally separate bacteria or algae that were absorbed by other organisms. Her theory of endosymbiosis is now widely accepted by the scientific community, pushing biologists to more closely investigate interactivity between species and co-adaptive behaviors, reshaping the scale at which we define an “ecosystem” and calling into question where one “individual” organism ends and another begins. Visitors to ponds among ponds can learn more about Margulis and her work at the exhibition’s curatorial station, or by registering at the ICA’s website to watch John Feldman’s documentary on Margulis’s life and work, “Symbiotic Earth,” online throughout the exhibition period.

The process of staging ponds among ponds at the ICA is itself an expression of symbiosis, with Springer and Turpin curating the exhibit remotely from anti-coronavirus lockdown in southern Germany through the facilitation of ICA director and curator Michelle Yeonho Hyun and curatorial assistant Iris Zhu. Hyun and the ICA team also worked remotely with Europe-based artists Duk Hee Jordan and Doutreluingne, sourcing a second-hand traditional Chinese “marriage bed” from Hangzhou and “experimenting” on the artists’ behalf to assemble their complex installation in Shanghai. 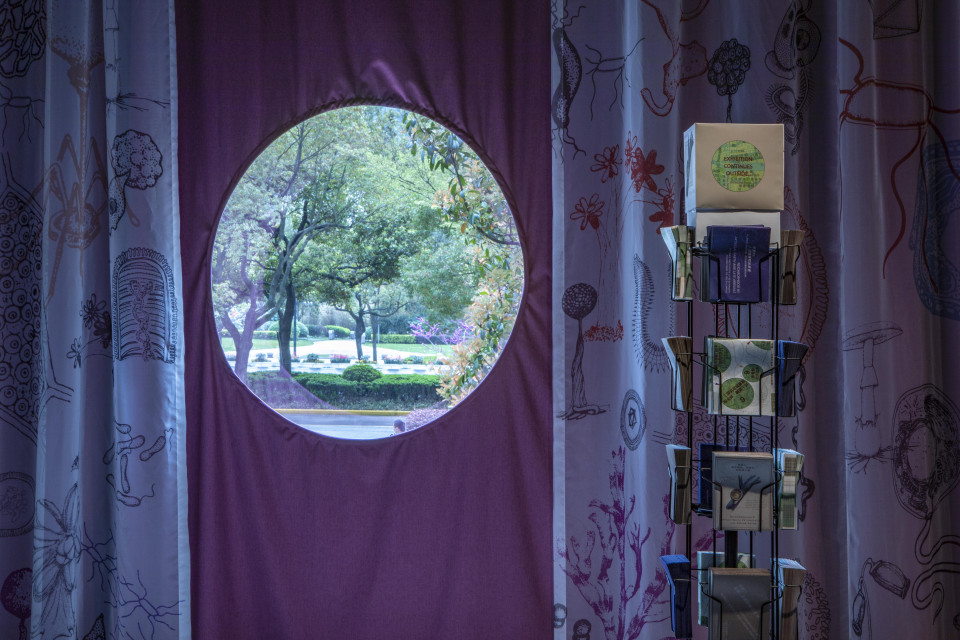 Curtains (“Reassembling the Outside”) designed by Springer and Turpin and crafted by the ICA team not only serve the practical purpose of darkening the gallery for film presentations. They also prompt visitors to imagine the gallery as a symbiont with the city of Shanghai, imagining the curtain as a permeable membrane between inside and outside, art and nature.

“China has a completely unique approach to natural history, botany, and taxonomy which was not subject to European colonial revision to the extent that it was in other parts of Asia,” said Springer and Turpin in a joint statement. “We wanted to ask: How do Chinese images of nature lend themselves to concepts of evolution and symbiosis differently than European images derived from Linnaeus, Darwin, or Wallace? And, how can the juxtaposition of Chinese and European artworks that address questions of ecological mutuality and co-existence invite new perspectives on planetary futures?”

Each of the featured artworks has important ties to Asian history and culture, starting with the installation at the center of the ICA’s gallery, “Assembly: Thing 000773 (Pseudomonas)” by international artist collective Agency. Part of Agency’s collection of “boundary things” that illustrate the fraught lines between “man-made” and “natural,” this piece reproduces a sample of a genetically engineered bacteria derived from cow dung slurry typically used for ritual cleanings in India. This bacteria, from the family Pseudomonas, was the subject of a landmark 1970s United States Supreme Court decision that essentially allowed companies and individuals to patent other living things as human intellectual property.

The soundscape of the exhibition is shaped in part by the audio of Maximilian Prufer’s 2018 documentary "A Gift From Him," filmed in Sichuan Province and returning to China for the first time in ponds among ponds. Thoughtfully juxtaposed against "A Gift From Him" is the feature-length film "I Have What? Chinese Peasants War: The Rhetoric to Justice" by Shanghai- and Hunan-based filmmaker Mao Chenyu, which calls into question the imagined separation between rural and urban landscapes and lifestyles in contemporary China. Through interviews and striking images filmed by Mao and by rural residents, "I Have What?" shows how urban demands and urban structures permeate and erase China’s countryside. On the final day of the exhibition, Mao will also premiere his newest film, "Anti-Rural China," a contemporary refutation of anthropologist Fei Xiaotong’s highly influential 1947 study of rural China, From the Soil.

“Without the urban, contemporary rural China does not exist. Rural areas have simply become the supply side of the supply and demand relationship to the cities,” said Mao, who grew up in rural China before coming to Shanghai to attend Tongji University. “Farmers are no longer ‘of the soil.’ The people who work the land are not farmers anymore - they are simply producers, and urban desire is the force that is doing the farming.” 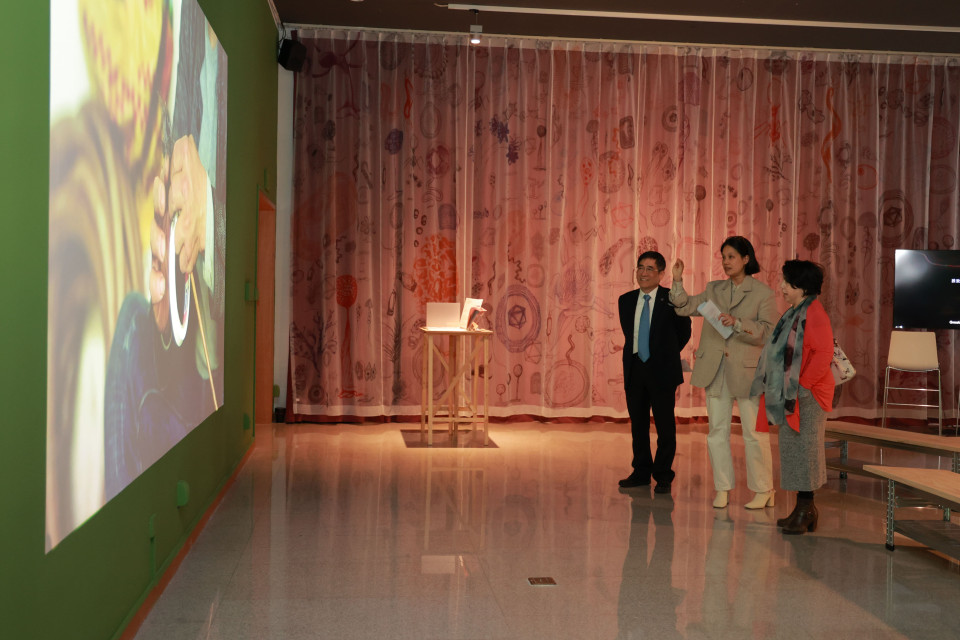 Hyun (center) leads NYU Shanghai Chancellor Tong Shijun (left) and German Consul General Dr. Christine Althauser (right) on a tour of “ponds among ponds” on the exhibition’s opening day. Parts of the exhibition were supported by the Consulate General of the Federal Republic of Germany and the Flanders Ministry of Culture, Youth, and Media.

Visitors can experience Shanghai’s own surprising landscapes of rural and urban hybridity in “Neighborhoods,” a series of illustrated maps created by NYU Shanghai Assistant Arts Professor of Visual Arts Monika Lin as part of the Zaanheh Project (an interdisciplinary investigation of Shanghai’s evolving natural history hosted at NYU Shanghai). Using strings of directions generated by random chance, Lin navigated a construction site, a suburban “ecopark,” and the NYU Shanghai campus’s immediate surroundings to find things like urban farms, metal trees, and other evidence of unexpected ties between the human and the natural.

“Neighborhoods” is not displayed like a traditional artwork, but instead as stacks of informational brochures that one might find at tourist sites. Visitors are encouraged to take the printed copies of the maps and a guide to creating one’s own explorations out of the gallery and into the city.

“It can be really surprising to find places where we can see the desire of human beings to interact with nature in ways that the built environment doesn’t consider. And when we encounter that surprise, it leads to an entirely different thinking process about relationships, how people live in the city, what constitutes populations in terms of their value or hierarchies,” Lin says. 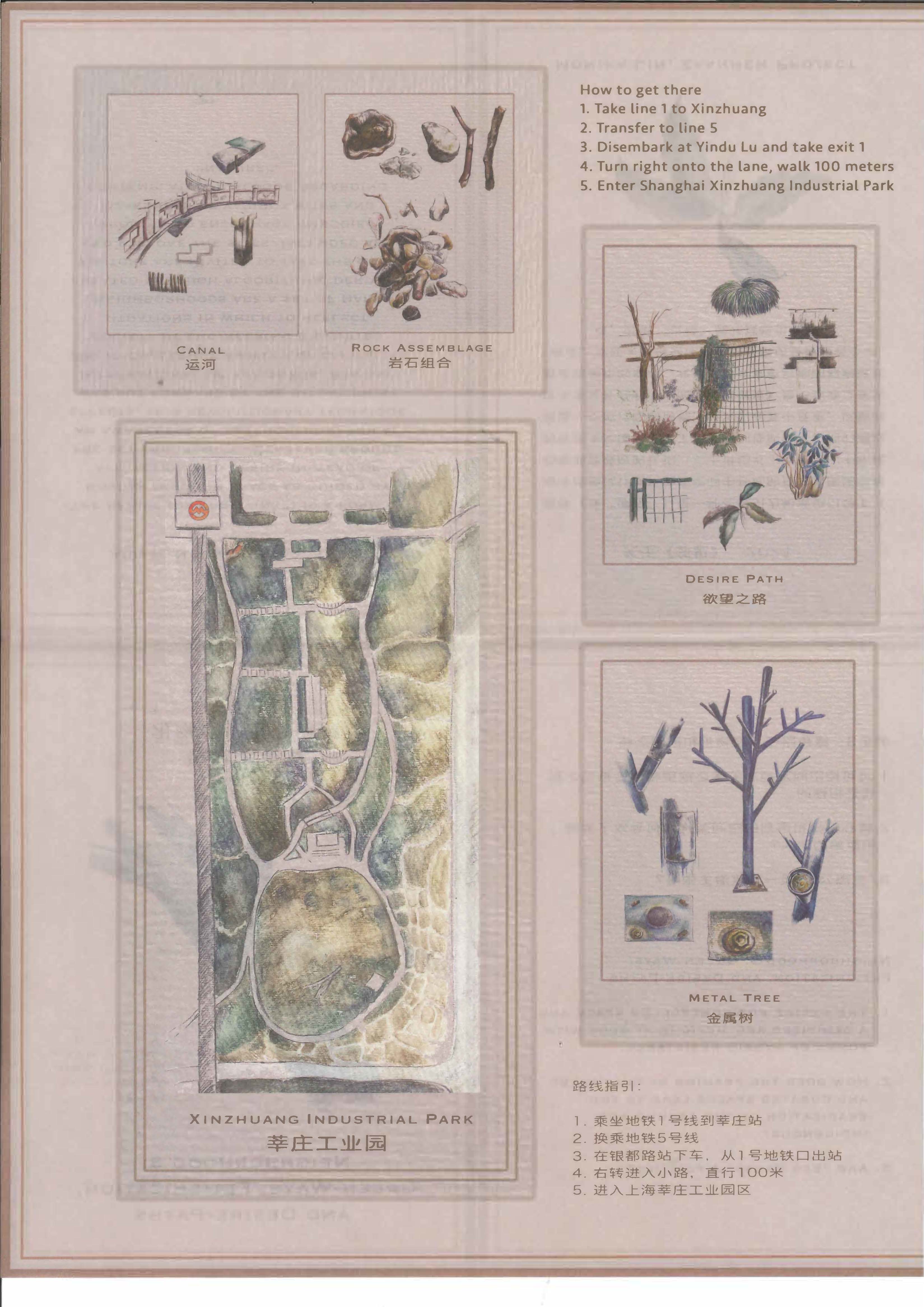 ponds among ponds also features several events and performances where visitors can engage directly with the artists, scientists, and intellectuals to learn more about the works and their implications for reimagining our relationships with the world around (within and among) us. For a schedule of events and to sign up, go to the ICA’s website or visit the gallery in person.