NYU Shanghai will celebrate the achievements of Class of 2022 through a virtual commencement ceremony on May 26, due to the ongoing COVID containment measures in the city of Shanghai.

The university’s sixth undergraduate commencement ceremony will be live-streamed starting at 8:22 p.m. (or, 20:22!) China Standard Time. Around 400 graduates will be honored via a virtual procession of graduate portraits. Families and friends will be able to sign in to celebrate along with their graduates in the ceremony. The third graduate student convocation will also be held virtually at 10:00 a.m. on May 29. Some 122 graduate students from three master’s and three PhD programs will receive their degrees.

"Commencement is the highlight of every academic year, the moment when we celebrate the successful completion of an intellectually demanding four-year curriculum,” Vice Chancellor Jeffrey Lehman said. “The Class of 2022, however, is completing a program that has been more than just intellectually demanding. Their work has required an unprecedented degree of resiliency and strength of character. All of us at NYU Shanghai look forward to this occasion, when we will be able to express our pride in and admiration for these very special graduates."

Many NYU Shanghai commencement traditions will be preserved in this year’s undergraduate ceremony, including speeches from the university leadership, NYU President Andrew Hamilton, and Chair of NYU Board of Trustees William Berkley ’66, and two student speakers, Shi Yiling ’22 and Bongani Musikavanhu ’22. A video tribute to the Class of 2022 will be broadcast. The ceremony will conclude with a rendition of the Alma Mater, Lights of NYU Shanghai.

“I feel more than honored to represent my fellow classmates to see our four years in retrospect,” said Shi, a Shanghai native with a double major in Business & Finance and Social Science, and a minor in Public Policy & Management. “I also feel very grateful for all of my professors, mentors, classmates, and friends for glorifying my four years. There have been a lot of unexpected and chaotic things happening in our college life, but when I recall, the memory still sticks to those moments when we studied together, worked together, and cheered together as a community.”

Born in Johannesburg, South Africa, and raised in Boston, Massachusetts, Musikavanhu ‘22 plans to give his address about the Black Lives Matter and Stop Asian Hate movements in Mandarin. “I knew I wanted to speak at the beginning of last year when the peak of Black Lives Matter and Stop Asian Hate initiatives drew attention to egregious discriminatory acts around the globe,” he said. “I believe in change beginning in the hearts and minds of the individual. So I hope that by speaking in Mandarin, I can make a more direct connection to my audience. The language still feels awkward in my mouth, and I feel as though every word I utter is pronounced entirely wrong. It is a very humbling experience, and I hope it serves as an example of what can be done in the pursuit of understanding and communication."

Yang Yang, the celebrated Chinese speed skater who won six consecutive world championships in short-track speed skating and two Olympic gold medals, will deliver the keynote speech at the ceremony and will be awarded the NYU Shanghai Chancellor’s Medal of Honor. 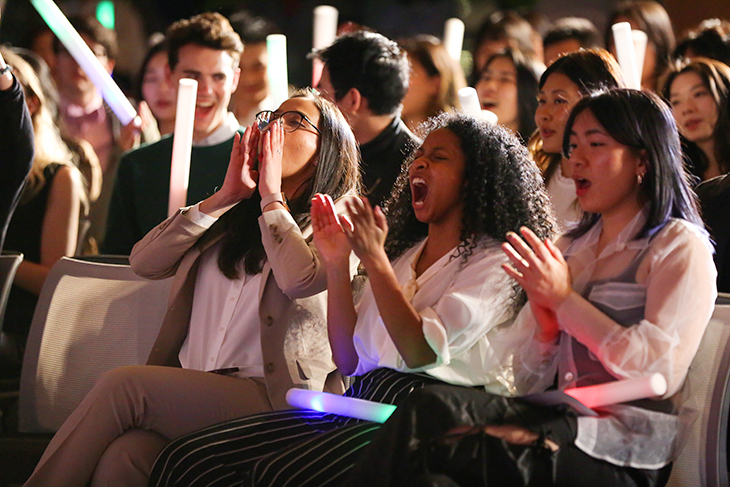 “For what the Class of 2022 has achieved in the past four years at NYU Shanghai both in person and online, they deserve a double ‘congratulations!' from me, plus an afternoon tea with each one of them individually when I can meet them in person hopefully very soon in the future,” said Chancellor Tong Shijun.