The Institute of Contemporary Arts at NYU Shanghai (ICA) launched its third season on September 24 with the opening of “STRESSED HERMS, SWEAT, & PERIOD GAS,” a multi-media exhibition featuring the individual and collaborative works of Los Angeles-based artists Candice Lin and Patrick Staff. In four works incorporating video, plant matter, painting and sculpture, the artists push viewers to explore the porousness of human bodies and social boundaries, and their intrinsic entanglement with the environment.

Originally intended as the third installation in the ICA’s The (Invisible) Garden series deconstructing the relationship between humans and our environment, “STRESSED HERMS” instead marks the institute’s reopening following the spring 2020 season’s cancellation due to the COVID-19 outbreak. Though the exhibition was under development before the pandemic, the exhibition’s themes seem remarkably prescient, said ICA Director and exhibition curator Michelle Yeonho Hyun.

“When it comes to the containment of this virus, we have found that we’re so unbelievably vulnerable. And yet we feel compelled to retain this myth that we are not permeable, and that what we conceive of as boundaries to the self – our skin, our bodies – are natural givens,” Hyun said.

Referencing biological warfare, historical and imagined plagues, and health rituals old and new in their individual videos, sculptures and paintings, Lin and Staff push viewers to re-examine not only what is “natural” about contemporary concepts of disease and health, but also gender, questioning how an always changing “nature” transcends the hierarchies humans attempt to impose on it.

The exhibition has transformed the ICA’s gallery on the Century Avenue campus’s first floor into a ritual space filled with wafting vapors from the central work, Hormonal Fog.  The installation – a scaffold of wood, texts inscribed in plexiglass, colored lights, and air ducts – is a massive vaporizer, transforming a tincture of herbs - licorice root and black cohosh, among others – into gases that raise a person’s levels of the hormone estrogen.

“Hormones – often understood as a stable determinant of binary sex, with estrogen and progesterone seen as female, and testosterone coded male – in fact fluctuate constantly both in and around us, linking the gendered body to synthetic substance; the natural world to the history of class, race and sex,”Staff and Lin said in a joint written statement. 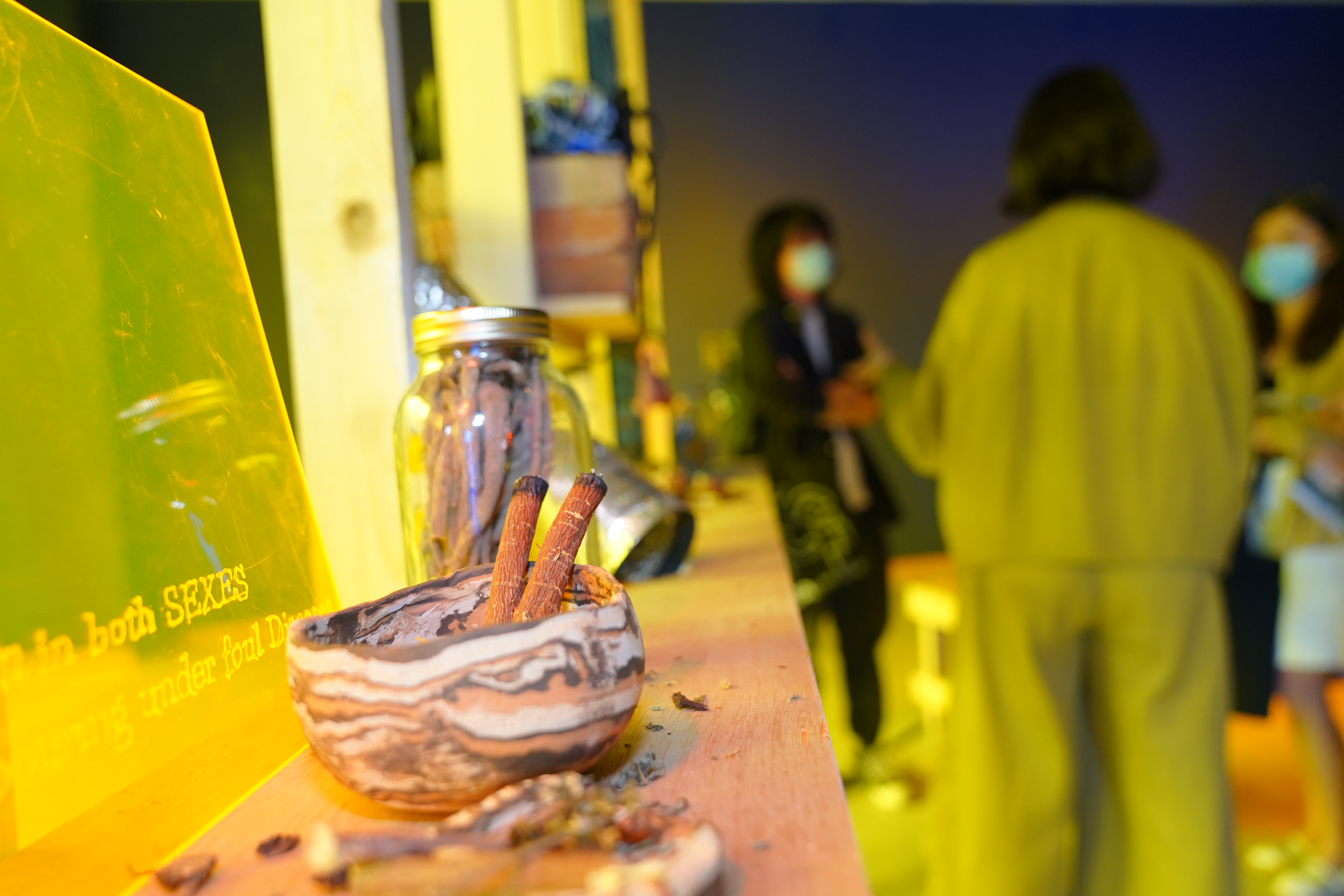 Hormonal Fog incorporates hormone-altering herbs - many of them common ingredients in Traditional Chinese Medicine (TCM) - in various stages of preparation for consumption alongside texts and images about gender and sex from cultures around the world.

“To show Hormonal Fog during a global pandemic driven by a primarily airborne virus presents a radical shift in how we understand what this work does or means in the world,” the artists said. “An invisible miasma is radically reorganizing both private and public space. It is a significant moment to present our work, particularly in Shanghai and in contemporary China.”

Hosting “STRESSED HERMS” at the ICA, particularly under pandemic conditions, has been a huge creative effort by artists and organizers alike. Restrictions to international travel forced the artists to direct the installation of their works remotely via photos and video feeds.  “It was a day-by-day, more than three week process, based first on meticulous instructions written by the artists, then daily reports including photos, notes, and questions sent via email each night (arriving in the artists' inboxes each morning in LA), the artists examining photos, giving feedback, and asking more question via email each day, then us receiving their emails by the next morning in Shanghai,” Hyun said.

The English-speaking artists also collaborated with the ICA to expand and adapt Hormonal Fog and the video Toxic Semiotics  – which include significant elements of text and narration – to make these works accessible to Chinese-speaking audiences.

Staff and Lin supplemented Victorian English texts from a previous iteration of Hormonal Fog with new texts, including one in Chinese. The ICA also commissioned a Chinese voice actor to perform a translated version of the narration in Lin’s video work Toxic Semiotics. Lin then manipulated the pitch and speed of the Chinese audio, layering it with background sound to essentially create a new, parallel artwork for Chinese-speaking viewers and listeners.

Although the ICA remains closed to the broader public under the university’s policies to prevent COVID-19’s spread, Hyun said  the restrictions have in fact allowed the ICA to explore new platforms for engagement and “expand our definition of the NYU Shanghai community.”

“One of the facilities staff members who works on the HVAC system came into the gallery to fix a maintenance issue. But I saw him looking at Toxic Semiotics, so I gave him the headphones for the Chinese version so he could listen, and he stood there watching and listening for the entire length of the video,” Hyun recounted.

“The fact that he was so engrossed by this piece made me so glad that we made the accommodation of providing Chinese narration and audio for the work, and it confirmed for me this idea that we need to expand our engagement with the wide spectrum of people who comprise NYU Shanghai’s community.” 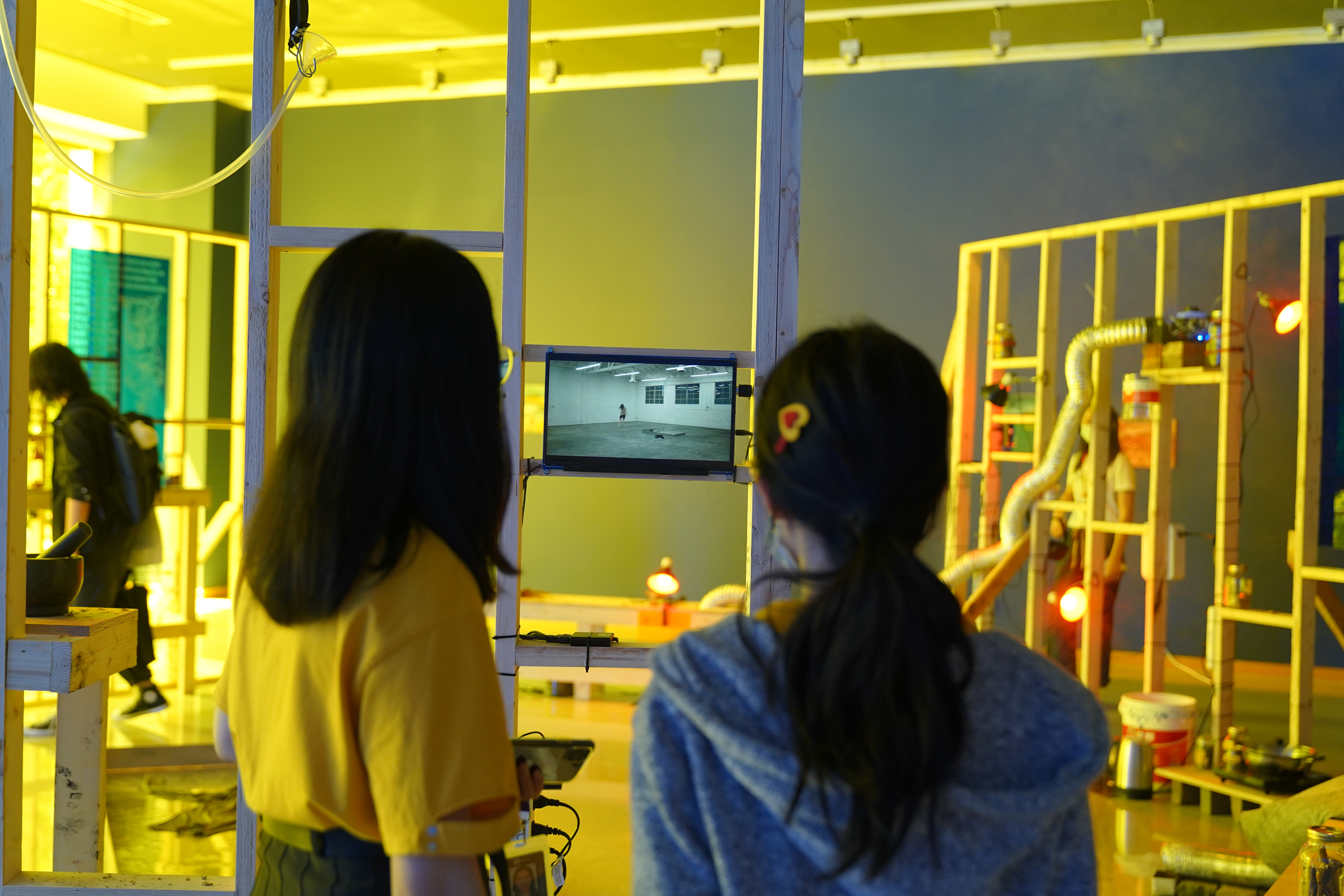 In addition to planning special tours for the university’s staff and contract workers this fall, Hyun has also broadened the ICA’s outreach to student organizations and faculty in disciplines ranging from social science to biology. The ICA is also working with NYU Shanghai’s Research and Instructional Technology Services Team (RITS) to develop an open-access virtual reality tour of the exhibition that will be available later this fall.

As with every season, the ICA will host several in-gallery Study Sessions – guided conversations focusing on one work in one hour – open to all faculty, staff, and students throughout October and November. Throughout November, the artists will also virtually host an interactive event, Full Moon Ritual: Toxic Sex, that allows participants to explore the potential transformations of their own bodies, culminating on the full moon of 30 November and followed by an online conversation with the artists on December 5. Anyone interested in taking part in ICA events, including those outside of the NYU Shanghai community and the general public, can register in advance on the ICA website.