NYU Shanghai’s 5th annual Ally Week kicks off on Monday, November 11. This year, Ally Week gives the whole NYU Shanghai community opportunities to challenge their assumptions and deepen their understanding of their diverse classmates’ lives through a celebrity-led discussion on gender equality, a student and faculty panel on colorism, a community choral performance and play by NYU Shanghai’s Thespian Society, and film screenings – including two documentaries made by NYU Shanghai sophomores.

An NYU global network tradition, Ally Week calls upon each NYU campus to engage with its own diverse community and to practice solidarity with classmates and colleagues who have marginalized identities. “Our differences are what make this community so vibrant, and Ally Week gives us time and space to easily start dialogues about these differences, dialogues that can be awkward or difficult to start otherwise,” says Ally Week Ambassador Ryan Hoover ’22, who also directs Friday’s closing performance of the Caryl Churchill play, Cloud Nine.

So what does it mean to be an Ally? Joyce Tan of the Office of Diversity Initiatives says it’s all about making a commitment to listening to others’ stories, using those stories as a gateway to challenge your assumptions, and intervening in social injustice when you see it happening. Ally Week builds upon NYU Shanghai students’ innate willingness to step outside their comfort zones by giving them opportunities to hear concrete examples of their peers’ own experiences of marginalization.

“Students get a lot of exposure to intellectual concepts about diversity in the classroom, but you also need space to digest what you’re learning in class and explore how those ideas translate into your daily interactions with people around you,” Tan says. “When students lead the conversation about diversity and how it impacts their everyday lives, it allows us to better examine our own identities and experiences.”

Practicing allyship at a campus as internationally diverse as NYU Shanghai comes with its own challenges and benefits, says Associate Professor of Practice in Political Science Almaz Zelleke, who has been taking part in Ally Week events at NYU Shanghai since 2016.

“We come from so many different backgrounds that we don't all start with the same premises. So before we can even start a conversation, we have to give each other some context for how gender, sexual orientation, or ethnic differences are perceived in our own countries,” Zelleke says. “But at the same time, having so many different perspectives can help us see these issues in a different light and prompt some creative thinking about how to handle them.”

NYU Shanghai Ally Week 2019 is also the first to feature film projects developed by students in the Office of Diversity Initiatives’ LEAD program. 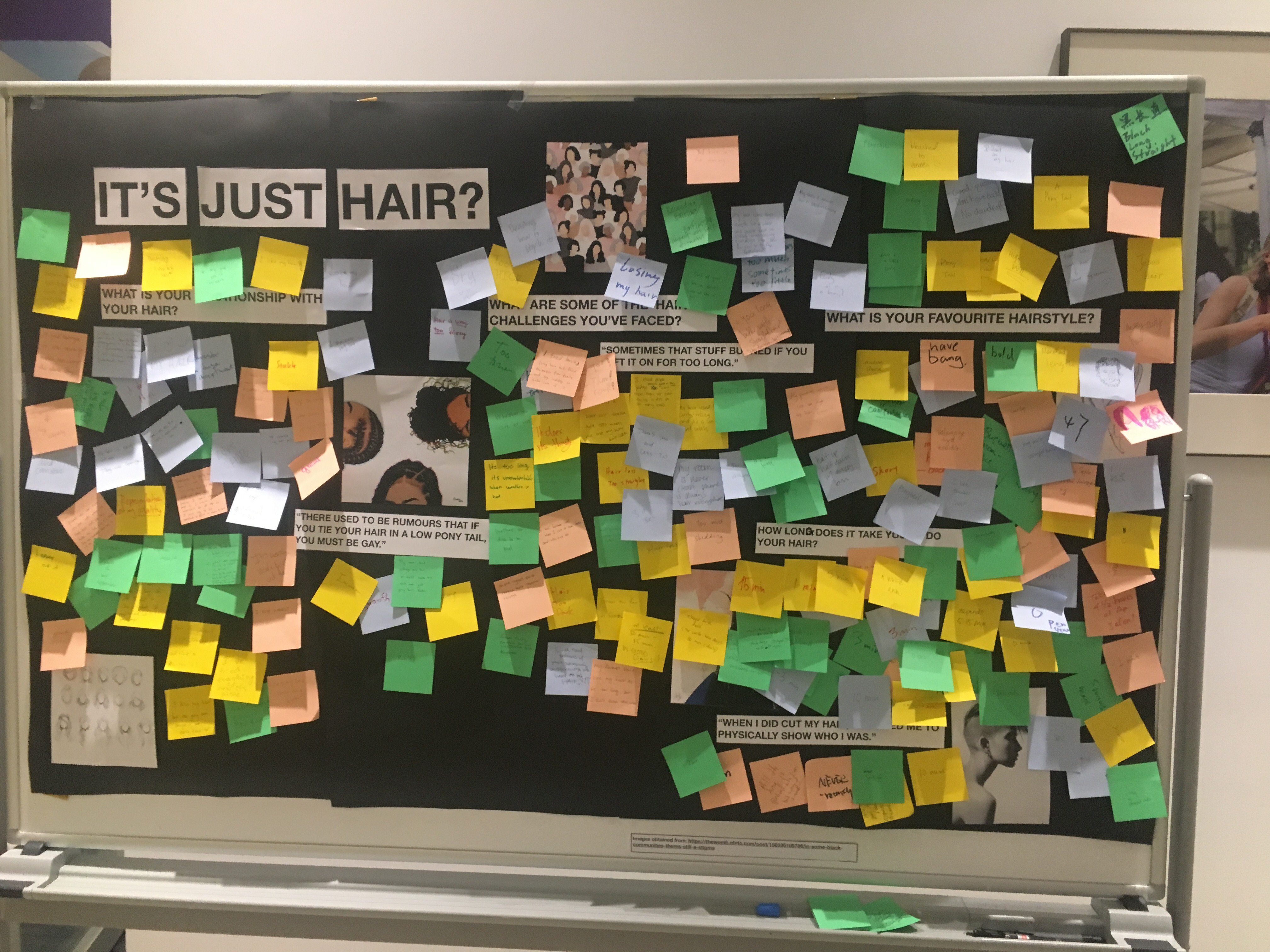 NYU Shanghai students filled a blackboard with their responses to questions about hair and identity from filmmaker E’jane Li ’22.

Abigail Mata-Hernandez ’22 of Chicago talked with family members in both her hometown and in her parents’ hometown in Mexico to explore the generational impacts of immigration on social and cultural identity. Meanwhile, E’jane Li ’22 of Johannesburg, South Africa filmed interviews with her hometown friends and neighbors to explore how their hair type, hairstyle, and body hair play a role not only in forming their identity, but in shaping their relationships and their role in society.

Both students emphasize that their projects are all about the key first step in practicing allyship: listening to others.  Says Hernandez, “Even if you’re friends with someone and you talk to them on a daily basis, if you don’t try to at least listen to them and understand their story, you will never really be on their side.”

Li says she doesn’t want her film to chastise others for cultural appropriation, but just to get her peers to think more carefully about how their own seemingly small personal choices may affect others. “Allies aren’t perfect, and you don’t need to be perfect when you practice allyship,” she says.  “It’s just always better to find out more so that you can get involved in that conversation and actually help in that conversation.”

Check out each day’s events below and be sure to RSVP by scanning the QR codes, or sign up by Google Form here!

Provocative media personality Winston Chen joins grassroots feminist activist and community leader Joy Lin to talk gender inequality in China. Says Chen, “Gender equality has not yet found solid ground here in China, even within elite universities, so I’m looking forward to talking about this at NYU Shanghai. Bringing students with so many different presumptions into one room to talk about this issue - well, it could make a scene! Can’t wait to see you all!” 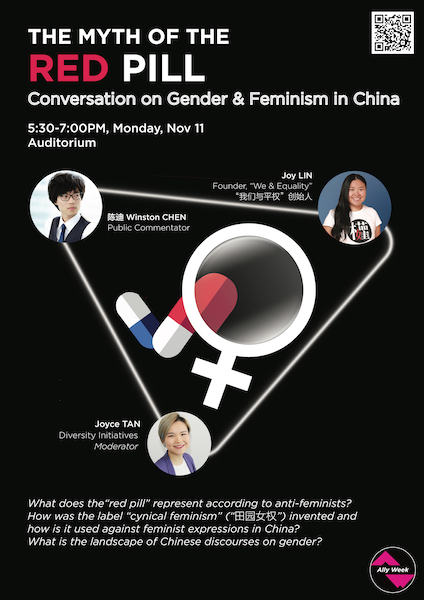 Head off-campus to OSGH Cinemas to follow the stories of three teenagers from across China. Get an in-depth look at how education, family background, and wealth interact to shape these young people’s fates. 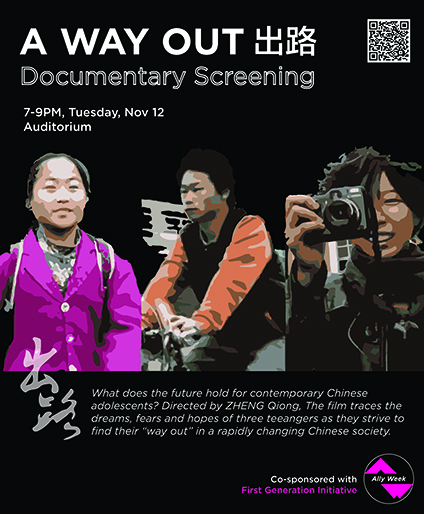 “As an African-American, I'm very aware of colorism within ethnic groups – discrimination against those with darker skin – in my own community, but I didn’t realize it was an issue in China until I came here. I hope we can come away from this discussion with a heightened sensitivity to the sometimes subtle ways our societies convey a hierarchy of worth to different members.” – Almaz Zelleke, panel moderator 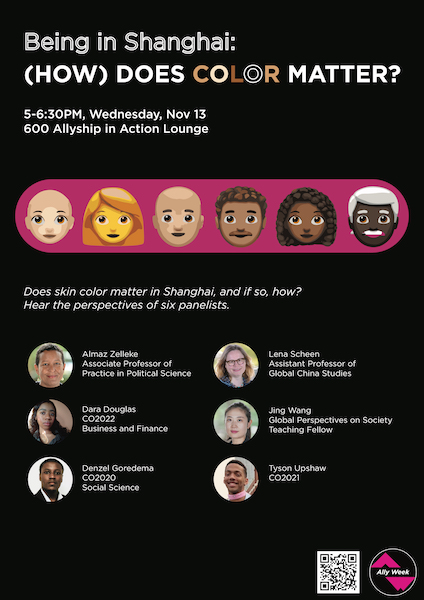 “My parents always expected me to just be happy on my own simply because I had a “better” life in Chicago than what they had in Mexico. But on some level they can also connect to the idea of leaving home to pursue opportunity like I’m doing here at NYU Shanghai. So I wanted the film to really show how people’s values and identities can evolve, even within one family.” – Abigail Mata-Hernandez ’22, director of The American Dream?

“In high school, there were a lot of stereotypes about your hair, and there was this rumor that if you tied your hair in a low ponytail, then you must be gay. At the same time, a lot of my black friends were being discriminated against for having their natural hair. I want to help people to see that hair can be a very important part of who people are, and it can have a lot of social implications as well.” – E’jane Li ’22, director of It’s Just Hair? 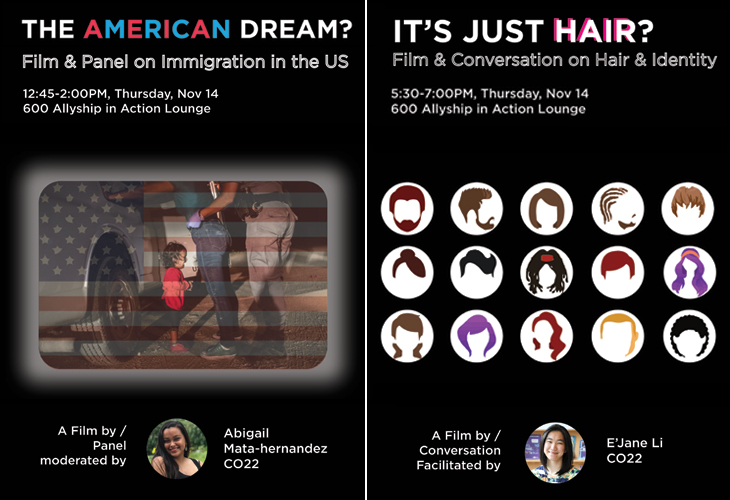 “Cloud Nine is a witty, dark, and biting comedy that tells the story of a dysfunctional family in colonial Africa desperately clinging to the hetero-normative and white-centric values of that time. I hope that the audience can walk away from the show having laughed, cried, and reflected more on their own identities and their interactions with people of different identities.” – Ryan Hoover ’22, Cloud Nine director and Thespian Society president