Mining Twitter Vitriol for the Soul of the American Voter

For Roopa Vasudevan, an artist and coder whose recent work has focused on the U.S. political climate, a home base in China has been a safe haven of sorts: The 13-hour time difference between the East Coast of the United States and her location in Shanghai provides a temporal buffer that allows her to more methodically process the events emanating out of Washington, D.C.

“It’s very easy to compartmentalize—everything happens overnight,” says Vasudevan, an assistant arts professor at NYU Shanghai. She takes time to read the news during her morning, “allowing myself that hour to feel infuriated or scared” before proceeding into her own work day as America’s political scene goes to sleep.

She says that distance was “beneficial” for her work on #Bellwether, a data collection project in which she compiled and analyzed Ohio-based or Ohio-related tweets about the 2016 U.S. presidential candidates and then distilled them down into messages for campaign-style merchandise. The work—commissioned by SPACES, a contemporary art venue in Vasudevan’s native Cleveland, and later exhibited in Brussels—includes posters, yard signs, and buttons that display tweets such as: “Kasich is a more effeminate version of Hillary Clinton,” “Ted Cruz is a liar,” “Bernie is that kid who was the only one who did the homework,” and “Hillary is more dangerous than Donald Trump.”

“During that period of time, it was good for me to not be in the U.S.,” Vasudevan says. “Living that content so intensely, I would have gone crazy.” Vasudevan studied film as an undergraduate student and began her career in television, including as a producer on MTV’s True Life documentary series, before deciding she wanted to find a better way to combine her interests in politics and social justice.

“When you’re questioning your life and career goals, you go to graduate school,” she laughs.

For Vasudevan, doing so opened up an entirely new source of raw material for her art: Big Data. In the Interactive Telecommunications Program (ITP) at NYU’s Tisch School of the Arts, she learned how to code.

“I was a very visual person—traditional computer science never caught my eye—but I really loved the process and the logic behind [coding],” she says. “I discovered I really have a love for taking large data sets and translating them into something that is legible to a wider audience.”

Atif Ateeq, who studied with Vasudevan at ITP (for one class, they created a jacket that could perform basic DJ functions), says she has “always been in tune with the really important issues of our time.”

In 2015, Ateeq and Vasudevan collaborated on “HANDS UP,” an interactive installation in which visitors were met with flashing red and blue lights, sirens, and a recorded voice telling them to put their hands up—a motion that triggered a strobe flash and the sound of a gunshot. The piece, exhibited at the Flux Factory in Queens, was criticized by the Patrolmen’s Benevolent Association as “perpetuat[ing] a falsehood about police officers and their use of force. ” But Vasudevan says the work was about “trying to generate some kind of empathy” among people who might automatically side with police in such situations.

Ateeq said he and Vasudevan came up with the idea for “HANDS UP” one night at a social gathering.

“Those conversations usually don’t go anywhere, but both of us felt it was an itch we needed to scratch,” he says, adding that Vasudevan is “comfortable tackling taboo issues.” He noted her work, “Sluts Across America: A Birth Control Advocacy Project,” which allows users to reclaim the normally derogatory word “slut” as a label for people who practice safe sex by describing their own reasons for using birth control on a map of the United States.

In one class at ITP, Vasudevan used cross-stitch to depict women’s voting patterns in the 2012 U.S. election, with red or blue stitching on old-fashioned needlepoint panels representing the percentage of women who voted for Mitt Romney or Barack Obama, respectively. For her thesis at NYU, “Hate Couture,” she analyzed hate speech online, working with designers to convert what she found into high fashion garments that varied in color and length based on the amount and context of the speech.

“Ultimately, I’m very interested in the way we can use technology to shed a light on things we may not even be consciously thinking about,” says Vasudevan, who writes her own code or builds on existing open-source tools to explore data.

It’s exactly that approach that made Vasudevan an attractive candidate for SPACES, says Christina Vassallo, the venue’s executive director, who earned undergraduate and master’s degrees at NYU. After being nominated for the SPACES World Artists Program, Vasudevan was one of four artists selected out of hundreds of applicants for 2016.

“We saw her as an artist who’s really working at the cutting edge,” Vassallo says. “We were interested in how she used technology to capture information, analyze it, and then visualize it.” 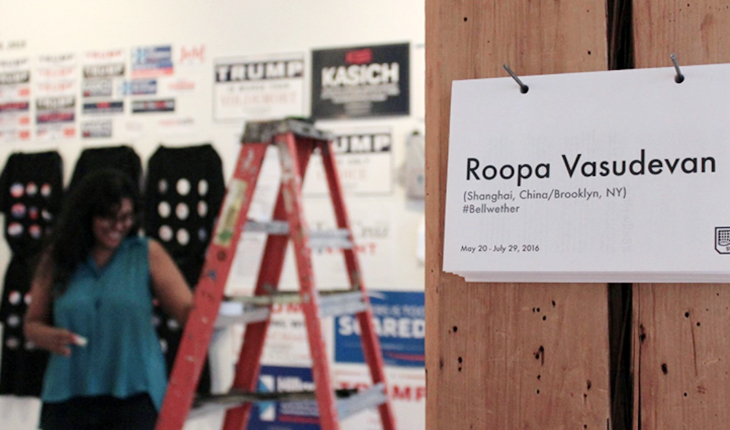 “Had Hillary won, the piece would have been interesting but would not have marked a historical moment in time,” she says. “Now, because of the outcome and how social media did end up influencing the election, it’s become an archival piece, something that reflects what we were going through in 2016.”

Post-election developments have given the piece additional layers of intrigue. Vasudevan says she thinks her project’s Ohio-specific filters may have minimized the collection of inauthentic tweets but acknowledged some of her results may have been affected.

“When I started the project, that was not something we were thinking about,” she says. “Were I to do this today, I’d need additional layers of research.”

Vasudevan’s current work relies on only one man’s social media presence: Trump. In “Editor’s Notes,” she uses Trump’s own words to “mark up” documents central to the United States’ founding, including the U.S. Constitution and constitutional amendments.

“He has said a lot of things that directly contradict what you find in the Constitution, in landmark U.S. Supreme Court decisions, in legislation,” she says. “I’m hoping to end up with a really fat, legal-looking book with all of this content as edited by Donald J. Trump.”

At NYU Shanghai, Vasudevan teaches foundation and elective courses to students in the Interactive Media Arts program. As someone who has always been interested in diversity, perception, and behavior, she says the classroom environment—about 50 percent of students are Chinese while the rest are international—is an inspiration.

“Everyone brings their own sensibility to the work by virtue of their different backgrounds and cultural contexts,” she says. Especially on paired projects, “they have to combine their partner’s ideas with their own to create one cohesive work that belongs to both of them. That fusion becomes really interesting.”

This article by Rebecca Beyer first appeared in NYU News.