Life Design: Prototyping Your Own Future

Imagine making time for a daily meditation, compiling the ultimate EDM tracklist for a DJ gig, or starring in your own online video series - and getting college credit for it.

In the Interactive Media and Business (IMB) class, Life Design, students learn to apply the principles of ‘Design Thinking’ - from design sprints to rapid prototyping to digital storytelling - to exploring their own possible career and life paths.

Taught by Associate Arts Professor of Interactive Media and Business, Emily Tsiang, NYU Shanghai’s course draws on courses Tsiang had previously taught at Stanford University, especially one developed there a decade ago by professors Bill Burnett and Dave Evans, authors of the New York Times bestseller Designing Your Life: How to Build A Well-lived Joyful Life.

“I’ve modernized the class for the global interactive media student,” says Tsiang, who arrived at NYU Shanghai in 2019. “Design thinking comes from product design, which is about better understanding a user or customer’s needs, but in Life Design the user is not a customer, the user is yourself.”

For the first three weeks of class, students reflect on their lives by ‘mining their experiences.’ Students create a ‘meaning map’ that visualizes patterns in their life. “Oftentimes students say, ‘I’m really interested in product marketing, what do I need to do to get there?’” Tsiang says. “But I want them to reflect on the experiences that have gotten them to this point. To ask, ‘what past life experiences have led me to have this interest?’”

A meaning map will often unearth many different paths and interests. “Instead of saying ‘I love all of these interests but I know I just have to be a data scientist,’ we can realize that a really wonderful, talented scientist is probably pulling from art and history to inform their perspective around their current profession,” Tsiang says. “The reframe that Life Design does is: How might I explore the multiple interests within me? And which one might I prototype first?”

“These classes are different from all the other IMB classes,” says Samantha Cui Yingyue ’21. “Rather than learning technologies and applications, this class inspires students by focusing more on self-development. It’s a wonderful opportunity to take a step back, reflect, and prepare for the future.” 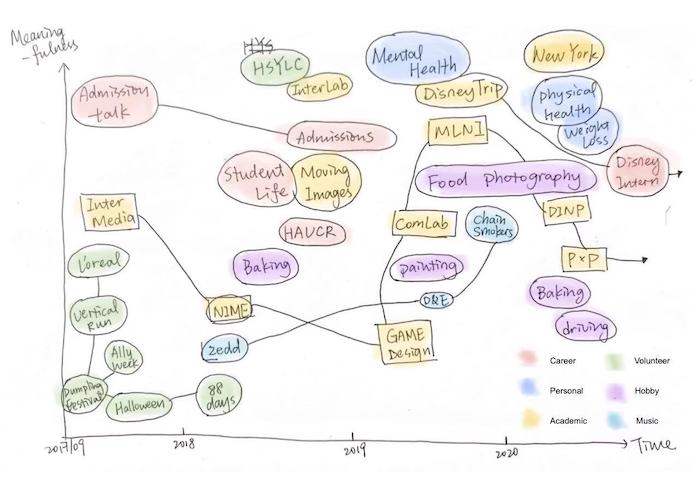 Life Design students are challenged with two month-long “design sprints,” one focuses on career interests and the other on well-being. Over each month, students address an issue, sketch out solution ideas, prototype them, and put them to the test. They run multiple prototypes starting from three possible career paths. “Prototyping is a way of trying on different interests and seeing how they fit,” Tsiang says. “It’s not about perfection but about giving yourself permission to experiment as quickly as you can. You just need to have a little bit of a designer’s mindset of biased action rather than being stuck; to let go, when it’s just not serving you.”

Jamie Wang Ziying '22 ’22 created her own digital portfolio website that showcases her work as an interactive experience designer in UX/product design, game development (she invented a Breaking Bad-themed card game!) and other interactive art creations.

Micheal Liu Qichen ’22, a business and finance major from Beijing, prototyped a creative interest as a DJ by signing up for DJ classes.

“I thought my career path in investment banking or consulting was settled already, but I was interested in more possibilities,” Liu said. “I have always loved EDM music, and this prototype experience pushed me towards being a DJ, so it means a lot to me. I learned that it’s hard to balance between catering to commercial audiences and satisfying my own music preference. It took me two weeks to arrange the tracklist that I used onstage.”

Michael’s prototype experience: Signing up for DJ lessons, igniting this dormant interest, and playing his own show.

Students also talk to people who are actually living their dream jobs—from upperclassmen who have internship experiences to faculty with similar research interests. After a month of exploring, they develop digital stories about their experiences—the goal is to communicate who they are to an external audience. Submissions included portfolio-like websites, articles, and videos.

“In class, it’s so inspiring to see the uniqueness and potential in everyone, especially when you discover something new about people you already know,” Liu says. “I hope we can keep being confident to be different.”

Guan Xiaoyi ’23, a business and marketing and social science double major, created a series of videos on BiliBili for her digital story project that introduces her marketing internship with Dark Horse comics and involvement with NYU Shanghai’s LEAD Program.

The second half of Life Design includes a design sprint on ‘well-being,’ where students pick a behavior that they want to change over the course of four weeks—from reducing the amount of time they spend on their phones to adding meditation to their daily routine. They document themselves and see where they can design behavior changes and implement them in a cycle of prototyping, testing and getting feedback.

“Well-being requires them to be a lot more vulnerable and explore more of their inner self or inner landscape,” Tsiang says. The class spends about four weeks exploring concepts from positive psychology to sleep science...they then run a 5-to-10-day well-being challenge, analyze their sleep patterns, and determine which activities give them energy or drain them.

“I was feeling really uninspired, given the whole COVID pandemic and wasn't sure about what I wanted to do in my life,” said Sam Ong ’22 from Singapore. “But now I understand the importance of energy management, something that I really never considered. It was really cool to reanalyze my preconceived notions of wellbeing, which has been particularly helpful during our finals.”

As a design educator, Tsiang says she sees herself as more of a facilitator or “guide on the side,” rather than an instructor or “sage on stage.” Through mandatory office hours or ‘coaching sessions’ she works with students one-on-one. “As I’m asking them questions, they're making realizations about themselves; in half an hour, you can see them have ‘lightbulbs’ on who they are, what they value.”

Sam Ong ’22, a social science major with a focus in political science, decided to embark on a meditation project to reduce the amount of anxiety he was facing at school.

“It’s deeply meaningful to teach this class because you’re helping students move through different experiences in life. To move to the next stage of transformation, they have to see themselves beyond their current schema of self. It’s a lot more enjoyable for them to do so with structure, support and a community. My job is to curate a reflective and experiential space that allows students to explore all the dimensions of who they are. I want them to discover that they have the power of self-authorship and can explore any opportunity that may arise from curiosity—that is what I hope they’re leaving this class with.”