In and Of the City: NYU Shanghai Reaches Out to Migrant Worker Communities

NYU Shanghai students are strongly encouraged to engage in community service during their university careers. This spring, dozens of students have been working with Shanghai’s migrant children in two separate initiatives:

A 10 year-old boy runs up to the front of a packed classroom, abuzz with the voices of 56 kids squabbling over finger-paints, sponges, and paper. “Teacher! Teacher! I need to go to the toilet,” he exclaims, holding up a pair of scissors. “I got blue paint in my hair, so I gotta cut it all off now.”

It’s a typical Friday afternoon for group leader Kong Xiaoyan ’21 and 14 other NYU Shanghai students who have volunteered to lead art therapy classes at Tangwan Primary School, a school for the children of migrant workers on the outskirts of Shanghai.

The art therapy class, organized by NYU Shanghai’s Dean’s Service Corps (DSC) -- a program to connect NYU Shanghai students with social engagement opportunities in the city -- gives the fourth graders a chance every week to escape their usual regimented classroom. Instead of sitting at desks packed four in a row, they pile into a multi-function room, and spend an afternoon sculpting clay animals or playing with finger-paints. The 10- and 11-year-olds move freely around big square tables, and chat with classmates they’ve rarely had a chance to speak with before.

In this exercise, students write their negative emotions on pieces of newspaper, then tear them up and throw them in the air.

But it's not all fun and games. NYU Shanghai students are tasked with taking notes on student performance, and providing feedback to the fourth grade homeroom teacher. After undergoing training sessions with Shanghai Roots and Shoots, a Shanghai-based community outreach organization that connected DSC with Tangwan, the NYU Shanghai students also know to model good listening skills and respectful behavior.

“We never tell them that they’ve made a mistake on their art projects,” says Kong. “Often, in school, your answers are only defined as right or wrong, but that can be so discouraging and limit your imagination. So we try to create a safe place for them to just have fun and be kids.”

Harrison Cheng, a former Peace Corps member who currently helms the DSC program, set up the volunteering opportunities to help NYU Shanghai students break away from the campus-dorm axis. “We want the students to know the city they’re living in, to engage with it, to see the lives of others, and recognize how easy it is to support the community,” says Cheng.

The commute from Century Avenue to the outskirts of Minhang district takes upwards of 90 minutes each way, and students make the trek for reasons both academic and personal. Youssef Abdelzaher ’21 first became interested in migrant communities after learning about them in an anthropology class.

For Youssef Abdelzaher ’21, a study away student from NYU in New York majoring in anthropology, the experience was eye-opening. “It definitely showed me something that a lot of students don’t see, and it made my study abroad experience fulfilling,” says Abdelzaher.

For Kong, volunteering has been a trip down memory lane.

“I got involved in this program because I used to be a migrant worker’s kid,” says Kong. “I received a lot of help from society, so right now, I’m at the point where I’m thinking: ‘can I do something for these kids as an NYU Shanghai student?’ and wondering: ’How has their situation changed compared to mine?’”

Kong’s family is originally from a small village in Anhui Province. Her parents began working in Shanghai as migrant laborers 25 years ago, and Kong remembers spending her childhood in wet markets with her parents, and recalls watching her father knock on door after door to obtain the necessary approvals to enroll Kong in the Shanghai public school system. 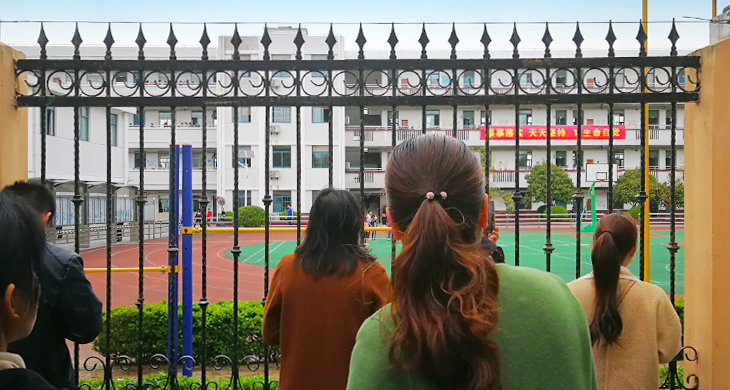 Parents waiting for their children outside of Tangwan Primary School.

Though students have different motivations for volunteering with migrant communities in Shanghai, their classroom observations support many of the theories that Professor Xu Qingwen teaches every week in her Service Learning with Migrant Families course. The course grounds students in theories about childhood development and studies of immigrant populations, and then sends the students off to volunteer with NGOs serving migrant children and apply their textbook knowledge to real life situations.

“Most of the students who choose this kind of work want to have a rewarding experience, not only to sit in the classroom,” says Xu. “Through these opportunities, they can access the outside world of Shanghai and reflect on what they read and learn and what they have experienced.”

Half of the class is working with Sunflower -- a Shanghai grassroots NGO offering educational programs and afterschool care for migrant children -- to read to younger children or teach them piano. The other half are tutoring adolescents through the Shanghai Jiuqian Volunteer Center, which supports high school aged youth who cannot access the public high school system or take the nationwide gaokao university entrance exam in Shanghai, because, as children of migrant laborers, they do not have official residential status, or hukou (residential status) in the city. E’Jane Li ’22 (far right) guides students through their scales on the piano.

In a building on the outskirts of Baoshan District, nearly two hours by subway from the NYU Shanghai campus, Jiuquan has set up a boarding-school style program for a handful of high-school aged kids.

He takes them through excerpts from New Concept English, a textbook that millions of high school students across China are familiar with. The students take turns reading sentences aloud in crisp British accents, and give rapid-fire responses to Chuck, as he drills them on reading comprehension and grammar.

On the ground floor, Zhu Haoze ’22 guides a similarly aged group of three boys through the basics of English grammar and parts of speech, painstakingly explaining the difference between a noun, a verb, and an adjective. One pupil is particularly enthusiastic, and tries to answer every question that Zhu throws out, with mixed success, while the other two are attentive, but uncertain.

“You don’t need to know every single tense or usage, but it might be useful later on to be able to express yourself in English,” Zhu reassures one of the more tentative boys. 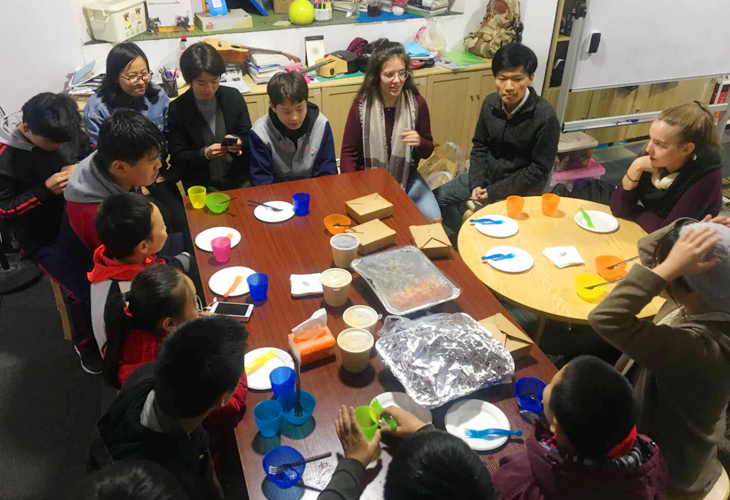 Mathematics and social sciences double major, Lewis Liu ’19, is also involved with the program as a tutor, and is writing his capstone thesis about Jiuqian.

Working with the children of migrant workers has impacted these NYU Shanghai students both personally and academically. Liu had originally planned double majoring in mathematics and political science, but pivoted from political science to social science because his work with Jiuqian made him want to focus on the individuals living in Chinese society, rather than populations and society on a macro-scale.

“I had a conversation with my parents about my future recently. They wanted me to do something that would help me find a 'good job' in the future,” says Liu. “But after volunteering, I see that there are things I can do to help a group of people, and that’s the significance of social work and social services…. That’s meaningful to me.” As for Kong, the IMA major says her ability to navigate both the glittering city centers of China’s first-tier cities as well as the wet markets and construction sites dotting the urban landscape has given her a unique perspective on the country’s stark dichotomies of rich and poor, urban and rural.

“I would see two different worlds,” says Kong, recalling a summer she spent commuting between her internship in Beijing’s downtown financial district and the construction site where her father worked in purchasing. “In the morning, my co-workers, who were Cambridge grads and Harvard grads, were talking about politics and what was happening in other parts of the world. And then at night after the long commute back to the site, my father’s friends were talking about going home in a few months for the corn and wheat harvest.”

“I’ve seen both sides, but some really privileged people, they don’t go to those places. They think they are living a good life...upscale coffee-shops, comfortable chairs in air conditioned buildings, kind of like where I’m sitting now,” says Kong. “They don’t realize what’s happening in those other places. But then, those comfortable people in comfortable places are the ones who actually have a voice, and can actually make decisions that change the situation.”

Read more about how NYU Shanghai students are engaging with social causes:

Transcript of Bai Hailun's Speech at the I AM LIMITLESS Conference: The Road That is Blocked