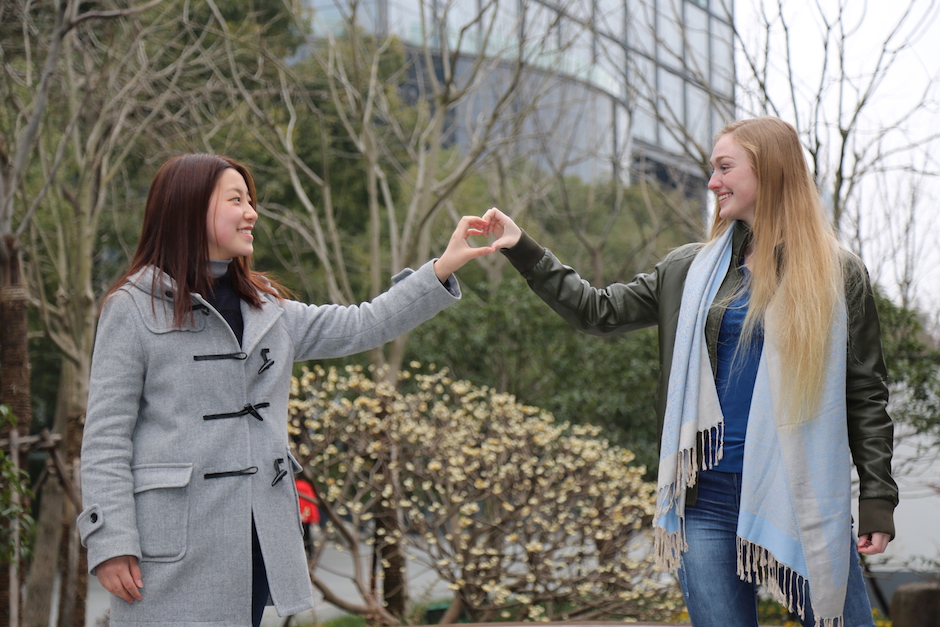 Sophomores Dayna Brown, an American, and Yuxin Feng, a native of Suzhou, were paired together freshman year and have been together since. The roommates have already shared many bonding experiences—from spending Chinese New Year with Yuxin’s family to teaming up against mosquitoes. “NYU Shanghai is a place where everybody is open to new things and being roommates with Dayna makes me feel that,” says Yuxin. 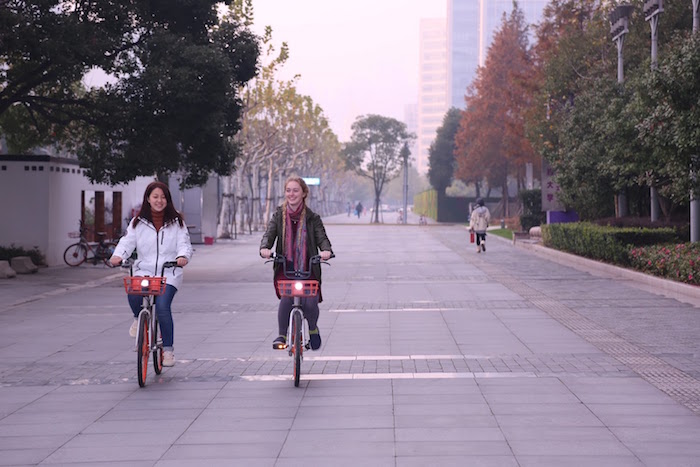 Home: My dad was in the military, so I’ve moved every 2 years for my whole life. Before I came to Shanghai, I was living in Altus, Oklahoma, USA
Major: Advanced Global China Studies

What we talk about: Everything—from TV shows and music to identity politics. I’m in a class called The Concept of China, and I asked Yuxin, ‘What makes you Chinese? Is it language? Is it nationality?’ We’ve had great conversations about the conflicts among China’s ethnicities.

She's taught me a lot about: Chinese culture. For instance, the rules about eating or drinking  “hot” versus “cold” stuff in China. She’ll say: ‘Oh my stomach is too hot to drink this kind of tea,’ and I ask, ‘Why can't I drink cold water?’

Language Practice: One day Yuxin asked me in Chinese: ‘Which bus are you taking tomorrow?’ and instead of saying ‘qishi,’ the word she taught me for ‘actually,’ I said ‘qushi,’ which means ‘go die.’ So I basically told her: ‘Go die, I'm going to take the subway to class’—she was super confused.

Favorite experience in China so far: A trip to visit Yuxin's family in Suzhou for Chinese New Year. We walked around beautiful gardens, saw some temples, and had supper with her entire family at her grandparents’ home. The food we ate was absolutely amazing, and I learned that a lot of the older members of her family were from different regions of China.

Having a roommate:  Has made me infinitely more aware of the space I occupy. It's not a bad realization, though. It's made me more organized and helped me communicate more, which is such an important life skill. Living with my roommate has also opened my eyes to living habits different than my own.

The best thing about Yuxin: She is so great to talk to. She's so smart and is colorful with her use of language. It doesn't matter the topic, she always can add an amusing twist to the conversation. She is just a friendly and intelligent person. New perspectives: I'm a 苏州人 (a person from Suzhou) but I don’t think Dayna has that kind of identity. She’s lived in many different places due to her father’s work. From her, I’ve gained a new understanding of ‘family.’

Before having a roommate: I never really had a chance to speak English with others. Outside of class, I didn't really use it. But I appreciate that Dayna is patient with my English and she always wants to practice her Chinese with me. She's very interested in learning a new language.

She’s taught me about: Taking risks and seeking new opportunities. I used to think of myself as a very conservative person who was too nervous to try anything because I didn’t have confidence. But after having Dayna as a roommate, I think I’m now pretty open to new things. She encourages me, and now I’ve tried storytelling events, speaking in public, even taking an on-campus job.

Favorite memory: The night before my GPS final last year, we ended up having a long discussion on Descartes’ Meditation on First Philosophy until 2 a.m.

We have different habits: For example, Dayna likes walking on the floor with bare feet, but I am not used to that. We respect each other’s existing living habits and learn to adapt to the differences!

Teamwork: A mosquito was flying around our room—it kept me awake until 2 a.m. Dayna was still awake, studying in the common space, and when she came back inside, we went on a full-scale hunt, armed with pillows and shoes on our bunk-bed and out on the balcony until 4 a.m. I don't know if it finally left our room, but we were so tired that we finally went to sleep.

The best thing about Dayna: She is always friendly, cheerful and confident. She loves swimming, playing the cello and things which I might have considered strange in the past, such as blue mascara and purple lip gloss. She always maintains an open and positive attitude towards new things and ideas, which is what has influenced me the most.
--

Want to share your roommate story? Send us an email at shanghai.social@nyu.edu.

See this story in the NYU Shanghai Magazine here.