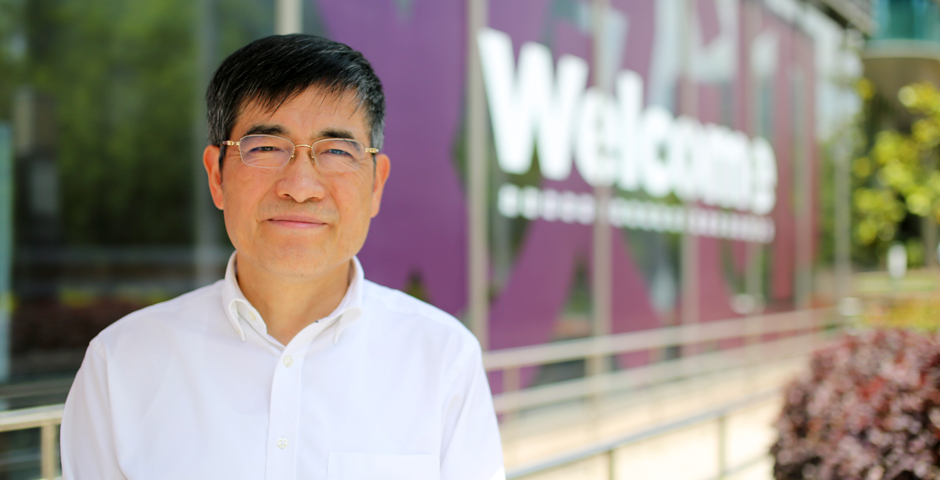 A few years ago, Tong Shijun’s former classmates at Hulin Elementary School [虎林小学] in what is now part of Shanghai’s northern Baoshan District asked him to give the student address at their 54th reunion. Tong – who has spent the last 40 years in dialogue with some of the greatest luminaries of contemporary philosophy and education reform – knew exactly what he wanted to speak about: the story of “The Shield of Gold and Silver,” [金银盾] a short moral tale from his second grade Hulin Elementary textbook.

In the story, two Roman generals (“It’s a story from the West!” Tong says with a laugh) are arguing over the nature of a shield, which the shield’s maker holds between them. One general contends that the shield is made of gold, while the other is adamant that the shield is silver. Finally, the craftsman resolves the disagreement by telling the generals that they are both right and both wrong at the same time. One side of the shield is gilt in silver, while the other is gilt in gold, and because each general saw only one side of the shield, neither understood the shield’s true nature.

“The reason why I was impressed so deeply by this text, even as a young boy, is that I think people of my generation in China have the privilege of knowing life on both sides,” Tong explains. “Before and after the Cultural Revolution, before and after reform, before and after normalization of the higher education admission system… We really experienced a lot of the whole process of the modernization of society.” 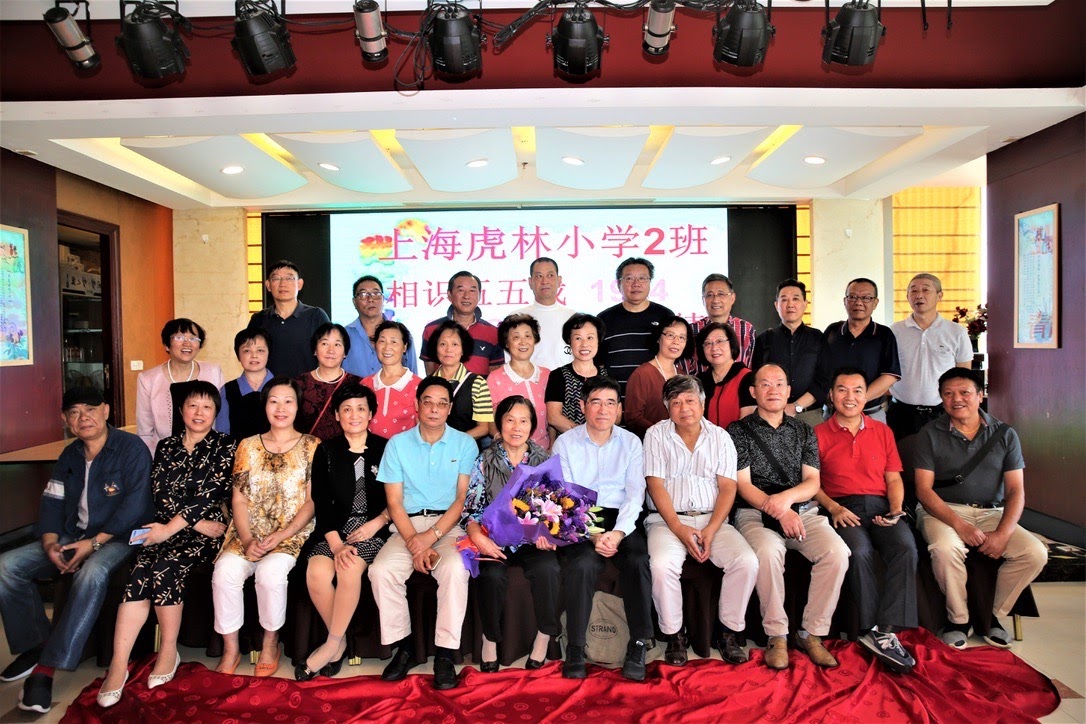 Tong (first row, right of his teacher holding the bouquet) with his elementary school classmates at their 54th reunion in October 2018. When Tong attended Hulin Elementary in the mid-1960s, the school was at the center of what was then one of the two largest centrally planned working-class communities built in Shanghai after 1949.

That urge to discover both sides has been the driving force of Tong’s life, carrying him across the world to a PhD program in Norway, to the study of modernity’s promise and problems through the work of contemporary philosopher Jürgen Habermas [尤尔根·哈贝马斯], to a Fulbright Fellowship [富布莱特访问研究学者] at Columbia University to translate a German work into Chinese under the mentorship of American scholars, to a leadership role at East China Normal University (ECNU), where he applied his experience as a teacher and scholar to the construction of a world-class forum for international exchange and critical engagement.

And now that quest brings Tong to a uniquely two-sided institution, NYU Shanghai, where he will succeed Yu Lizhong as the university’s chancellor on June 1, 2020.

Tong credits his early interest in the dichotomies of contemporary life to a childhood that straddled two Chinas – one the modern socialist state of the centrally planned Shanghai neighborhood where he spent his elementary and middle school years, the other the traditional rural China of his grandparents’ village in an outlying district [萧山] of Hangzhou, Zhejiang Province, where Tong spent the first six years of his life.

Tong’s grandparents were farmers and silkworm keepers who Tong says did everything the traditional way, from watering their crops to weaving their clothes. Life in the countryside left an indelible mark on Tong, who says he still vividly remembers the loud sound of silkworms munching mulberry leaves late into the night.

When Tong entered ECNU as an undergraduate student in 1978 – part of the first class of students to attend university after the resumption of China’s national college entrance examination in late 1977 – he began to take a more scholarly look at how these two Chinas could be reconciled to each other. Studying under the renowned philosopher Feng Qi [冯契] for both his BA and MA in philosophy, Tong gained a deep understanding not only of traditional Chinese philosophy, but also of how this tradition might engage in conversation with the full spectrum of Western philosophy. 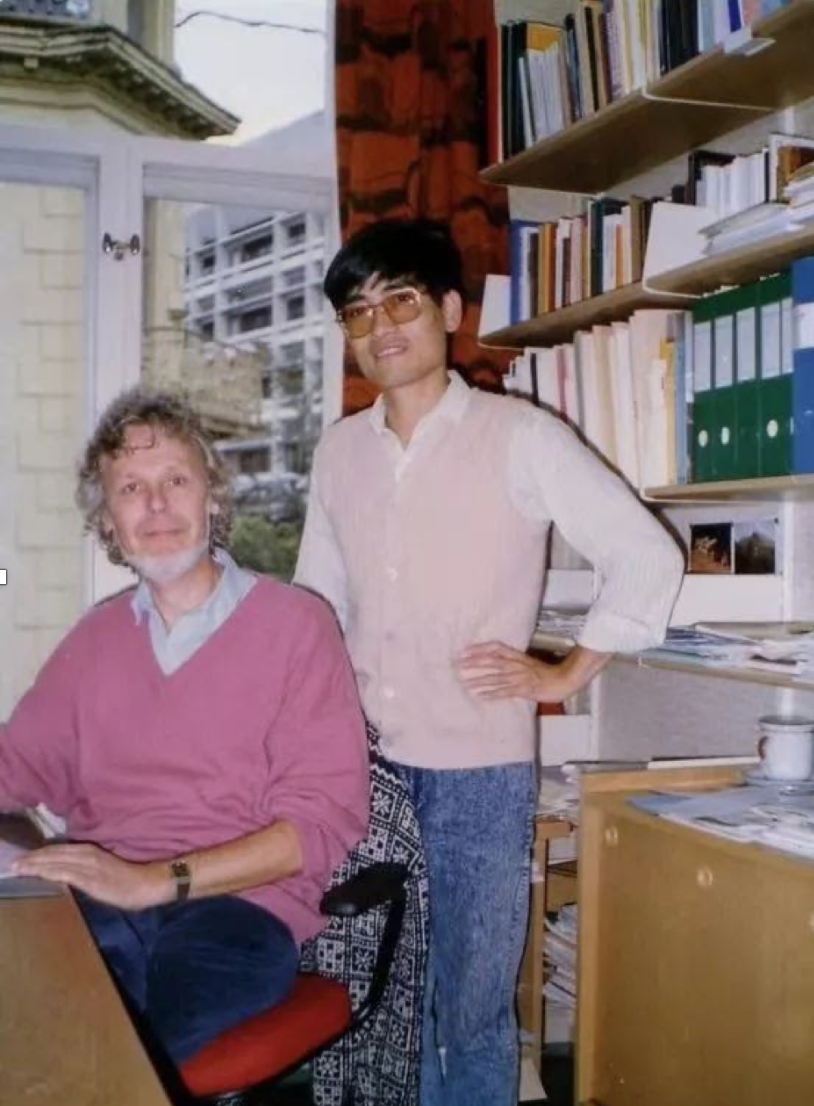 Tong with his advisor, friend, and colleague Gunnar Skirbekk [奎纳尔·希尔贝克] at the University of Bergen [挪威卑尔根大学]  in 1989. Skirbekk and Tong continue to maintain a close academic and personal relationship  - “Gunnar was the first non-Chinese friend with whom I shared the news of my grandson’s birth in March,” Tong says.

In 1988, Tong traveled to the University of Bergen [挪威卑尔根大学] in Norway as a visiting scholar in an inter-governmental academic exchange program, ultimately earning a PhD in Philosophy from the university in 1994. His advisor at Bergen, Professor Emeritus of Philosophy Gunnar Skirbekk [奎纳尔·希尔贝克], introduced Tong to many of the most influential philosophers of the day, including Habermas. Tong was drawn to the German scholar’s critique of modernity on one hand and his defense of modernity’s potential to benefit society on the other, a stance that resonated with Tong’s own experience in a rapidly opening China and his travels through a Europe still divided along Cold War lines.

But most striking to Tong was Habermas’s concept of communicative rationality – the idea that no society or institution is able to act or develop both rationally and humanely without engaging in real debate and discussion about those very actions and developments. Although this idea seemed novel to Tong, he also realized it was something in which he deeply believed and something he had been trying to practice in his own teaching at ECNU since he joined the university’s faculty in 1984.

“In philosophy, usually you think alone - we imagine what other people would think about all the things we are analyzing, but imagining others’ perspectives is not enough. What is truly important is to be engaged in real dialogues, to take real perspectives of others into interaction with your perspectives,” Tong says. “If you want to cultivate really cosmopolitan minds, you must create conditions for real interactions for young minds, young people.”

In fact, ECNU students had already given Tong recognition for doing just that, voting him one of the five best teachers at the university in 1987. Tong says he earned many students’ votes because of his approach to his course on Marxist philosophy. The class focused on contextualizing Marx’s works in history and in the European philosophical tradition, helping students to go beyond the dogmatic understanding of Marxism that many had learned in their earlier schooling.

“Of all the awards I have been given, I am most proud of this title – Best Teacher – because that’s the one I received on the basis of the votes of my students,” Tong says. “For me, it was an affirmation that I had successfully established a platform for my students to freely exchange ideas.” 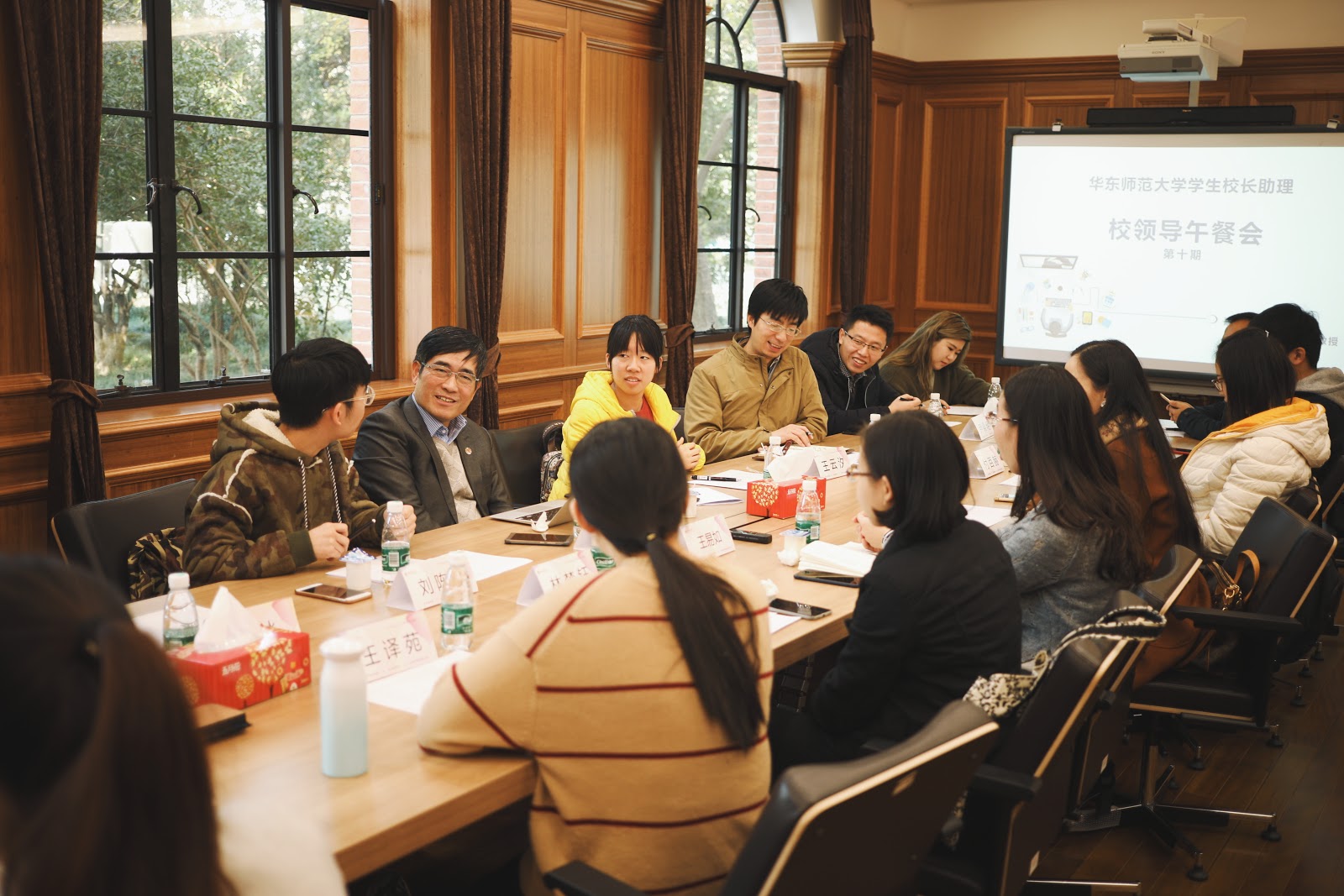 Tong meets with ECNU undergraduate students for a lunchtime discussion in November 2019, shortly before he retired from his leadership role at ECNU.

Tong left his teaching and administrative position at ECNU in 2004 to take a post at the Shanghai Academy of Social Sciences (SASS). Tong characterizes this part of his life as the most fruitful period of his life as a scholar, digging deep into how philosophy could inform debates about the nature and path of modernity between China and the West. His position at SASS also gave him the freedom to travel to engage with scholars around the globe, and he gave lectures across the world from Brazil to Iceland to Korea, and several stops in between.

“Dr. Tong has contributed a unique theory of East-West relations based in part on Habermas's theory of communicative action and on the idea of dialogue between civilizations. It could not be more timely,” says Dr. Andrew Feenberg, Canada Research Chair in Philosophy of Technology in the School of Communication at Simon Fraser University [西蒙弗雷泽大学].

David Rasmussen, Professor Emeritus of Philosophy at Boston College and Editor-in-Chief of the journal Philosophy and Social Criticism, says Tong’s crowning achievement as a scholar is his translation of Habermas’s “most brilliant work,” Between Facts and Norms [在事实与规范之间], into Chinese. “It is one of the most important works on contemporary law and society, so to introduce that work to China is an amazing task that can really advance the discussion of civil society,” says Rasmussen.

Although Tong says he thoroughly enjoyed his tenure at SASS, he always felt drawn back to the “idea of a university” and the task of fostering the real-life dialogues that Habermas views as the basis of modern civil society.

In a “face-to-face dialogue” in 2012, Tong shares his ideas about how to live a fulfilling college life with ECNU undergraduate students at the then newly established Meng Xiancheng College. Tong spearheaded the introduction of a system of colleges within the university (much like those at Oxford University or Harvard University) to “encourage on-campus-off-classroom interactions between students so they can create their own autonomous community life.”

In July 2011, less than a year after NYU and ECNU signed the formal agreement to establish NYU Shanghai, Tong returned to his alma mater as both Professor of Philosophy and as Secretary of the university’s Party Committee, a position Tong likens to the position of University Council Chair at a US or European institution. As someone whose primary task was to create a forum for dialogue, Tong says his work as an administrator was the culmination of his practice of philosophy.

“So I can integrate my passion as a philosopher with my application of these principles as an administrator. Again, I want to unify two sides.”

Says Tong’s longtime friend and colleague Thomas Pogge, Leitner Professor of Philosophy and Professor of Political Science at Yale University, “Tong is a wide-ranging intellectual who integrates philosophy with history, economics, public health and political science as well as with profound reflections on politics, culture and technology. He is also a fair-minded, unpretentious person with moral integrity and a gentle sense of humor.”

Tong could not imagine a better place to continue his practice as a philosopher than NYU Shanghai, a living laboratory for the kind of trans-cultural civil discourse that Habermas (and Tong) believe is at the heart of forming a rational and humane world.

“I’m especially impressed by NYU Shanghai students’ mentality - their readiness to explore new things and to communicate with people from other cultures. They don’t hesitate to raise questions, and they are more and more used to organizing for themselves to solve problems,” says Tong.

“Both America and China have strong and rich traditions of education in general and institutions of higher learning in particular, and I think we have a duty to bring our best tradition into the collaboration and try to learn the best part from the other side.” 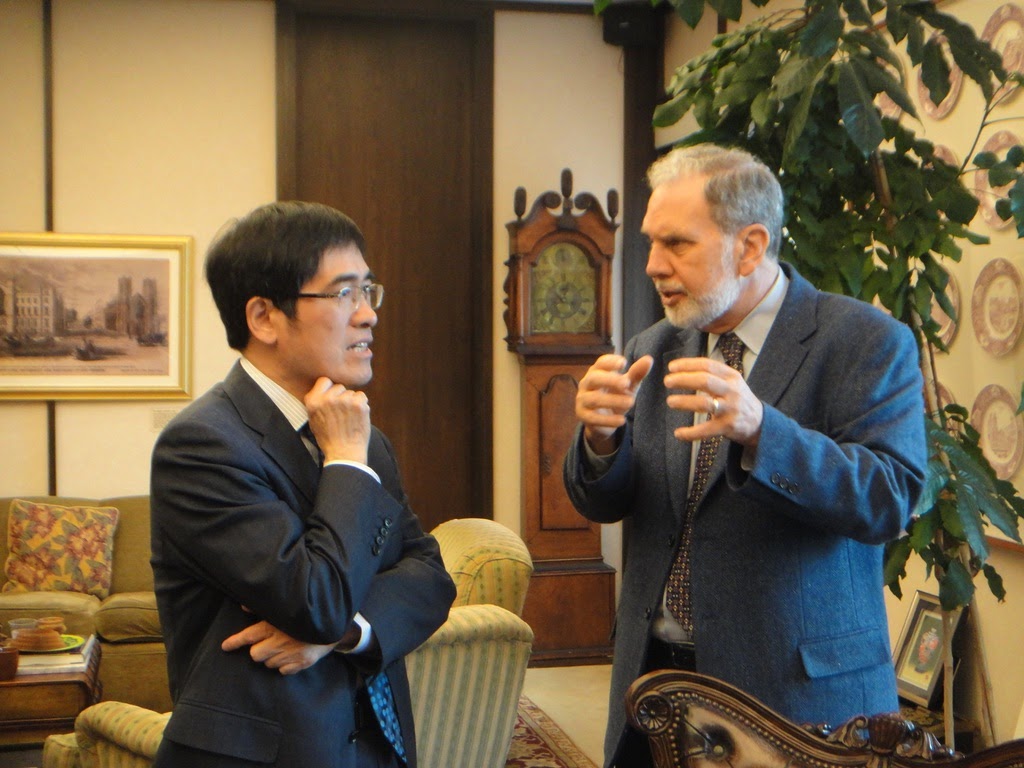 Tong in New York City in March 2012 with John Sexton, who at that time was President of NYU. Tong says he finds Sexton’s recently published work, Standing for Reason: The University in a Dogmatic Age (Yale University Press, 2019), particularly trenchant. “I agree with Sexton that the best way to fight against the threat of secular dogmatism that he describes is to have a platform, a space, to cultivate future minds who will lead the world in a culture encouraging dialogue, encouraging argumentation rather than standing for something dogmatic without regarding other perspectives,” Tong says.

Outgoing Chancellor Yu Lizhong, NYU Shanghai’s first chancellor, is confident that Tong will be up to the immense task of leading this interdisciplinary and intercultural institution to ever more meaningful engagement with its global community.

“He is modest and gentle, an excellent communicator, and happy to be a friend of faculty, staff and students," says Yu. "From the beginning, he has given his strong support to the establishment and development of NYU Shanghai. I am sure NYU Shanghai will sustainably develop and continue to flourish under the joint leadership of Chancellor Tong and Vice Chancellor Lehman.”

“During his long tenure as ECNU’s Party Secretary, Tong Shijun has been a committed advocate for NYU Shanghai’s unique role in Chinese higher education as the first Sino-American joint university,” said Vice Chancellor Jeffrey Lehman. “He is a serious philosopher, perfectly suited to succeed our founding Chancellor Yu Lizhong, and I look forward to our work together in the years ahead.”