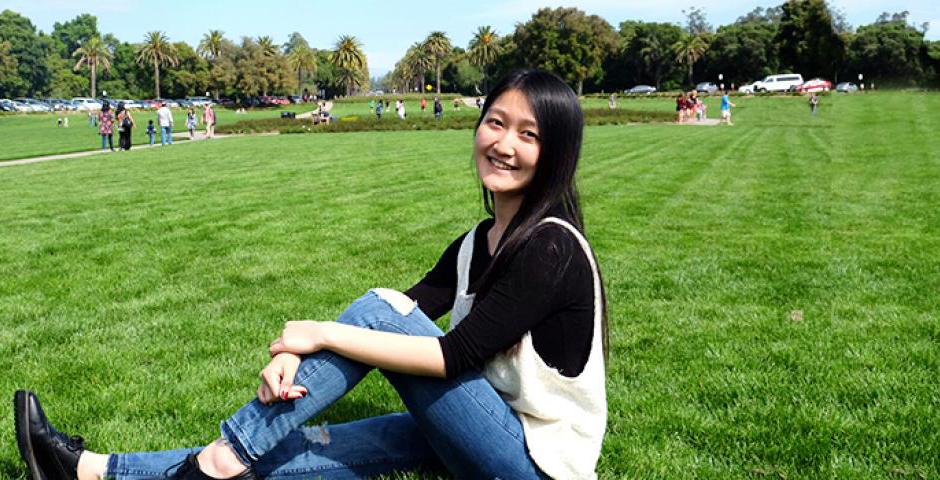 Hu Shuang (Sophie) ‘17 had never left her family or her hometown in Ningbo, Zhejiang province before beginning her journey at NYU Shanghai. Four years later, the business and finance major has studied away in New York and Washington DC, interned at the Hudson Institute in the US and Accenture in Shanghai, and recently accepted a position with PriceWaterhouseCoopers (PwC) management consulting in Shanghai.

“Like choosing a career in consulting, I came to NYU Shanghai to free myself from the confines of my past comfort zone and embrace the diverse possibilities of starting a new chapter and making a difference,” she said.

The 2016 Rhodes Scholarship candidate admitted that accepting her offer to be part of a brand new university surprised and confused her parents and relatives, who at first asked her to reconsider.

“In my family’s eyes, taking a risk would leave me vulnerable to unpleasant surprises, but I preferred to see myself as an adventurer – a pioneer exploring an unknown future,” Hu said. “What appealed to me was NYU Shanghai’s innovative spirit to lead and invent, rather than simply follow existing patterns.”

Attracted by the English curriculum, all-star professors and the chance to thrive in a globally inclusive environment, Hu arrived at NYU Shanghai determined to lead and learn.

“I realized that everyone has brilliant potential and if I got caught up in trying to be normal and fit in, I would never realize that potential,” she said. “Right from freshman year, I embraced taking on leadership roles and I also felt socially responsible for giving back to the community. ”

Hu became an Ally Week Ambassador in Fall 2014 and joined efforts in holding photography exhibitions, writing slogans, and shooting videos to share the voices of the LGBTQ community.

“I was inspired by my Global Perspectives on Society course, which introduced me to broader concepts of gender identity, feminism, and the marginalization of LGBTQ individuals—topics that had never breached the classroom doors of my previous education,” she said.

In her sophomore year, Hu co-founded a student initiative called PEER x NYU Shanghai with a Beijing-based NGO to promote liberal arts education in rural China by designing online courses and field teaching for rural teenagers; coordinated a water sustainability advocacy program with World Wildlife Fund China; and organized a forum called “Dialogue: Yangtze, We Care and We Act.” It was crafting these cohort events that led to her winning the NYU 2016 President’s Service Award from President Andrew Hamilton.

“NYU Shanghai exposed me to a level of cultural diversity that I might not have easily encountered at a traditional Chinese university,” Hu said. “In an open environment, I was encouraged to learn about foreign cultures and the lives of my international friends while sharing my own culture with them. It felt like a new world of thought was being opened to me.”

Studying abroad for a semester at New York and Washington DC during her junior year, the NYU DC Global Leadership Scholar seized every opportunity to further her understanding of China-US relations in the business and financial realm.

“I realized that gaining a deeper understanding of China and international relations happens best by communicating in person with scholars from other countries,” she said.

Eager to explore the impact of public policy on business and finance in Washington DC, Hu interned at the Hudson Institute and worked at the Center for Open Data Enterprise—a startup founded by a World Bank consultant, where she facilitated a roundtable conference co-organized by the Center and the White House Office of Science and Technology Policy.

“The transformation in becoming a global citizen continues beyond campus. It’s always thought-provoking to talk to new people,” Hu said.

Experiences That Shape the Future

After gaining experience in education innovation, environment advocacy, financial economics, public policy research and with startups and NGOs—Hu believes her efforts in these endeavors will pay off as she looks forward to her career in management consulting.

“The diversity of these experiences have shown me the potential of consulting companies as a startup for innovative projects,” said Hu. “The connection is to solve problems with inclusive views and comprehensive consideration while optimizing a strategy for the unknown future.”

“The excitement lies in the challenge to make a difference,” she added. “The future is uncertain, but it’s important to embrace unique opportunities and challenges and set expectations for oneself.”

Hu is volunteering over the summer with the China Children and Teenagers’ Fund, which aims to help Syrian refugee children near the Turkish border.

“I still remember the summer when I was studying at Tel Aviv University and Istanbul, where I witnessed the terrorism attacks from Hamas,” she said. “Having a strong feeling as a global citizen, I felt called to action.”

“Making a decision or taking an adventure is accompanied by struggle and risk. However, experiences become the treasure of life. I’m grateful for NYU Shanghai telling me that the life is full of unlimited possibilities, and that we are freer than we think.”