Students, friends and colleagues from as far away as Brazil, France, the United States, and Japan gathered at NYU Shanghai October 22 to celebrate the life and academic achievements of the late Professor of Mathematics Vladas Sidoravicius, who passed away unexpectedly in May.

Colleagues at the day-long memorial and mathematics seminar remembered Sidoravicius as a brilliant, globe-trotting mathematician, a prolific researcher who cultivated lifelong friendships, generously mentored his students, and left a lasting impact on the study of mathematics and probability theory in universities across three continents.

“We all felt there was a need to come together to fill the hole left by Vladas’ passing,” said Professor of Mathematics Pierre Tarrès, who organized the event. “We wanted to reconstruct the Vladas we all knew, who was so passionate, charming, full of energy and inspiring.”

Born in Vilnius, Lithuania in 1963, Sidoravicius received his PhD in Mathematics from Moscow University in 1990, just as the Soviet Union was dissolving. A search for opportunities abroad led him briefly to the Netherlands and France, and then to Rio de Janeiro, Brazil, where he became a Professor at Instituto Matemática Pura e Aplicada (IMPA).

Sidoravicius eventually gained a worldwide reputation not only as a brilliant scholar, but also as a skilled connector of people, constantly bringing together fellow mathematicians from around the globe in seminars, conferences, and social events. In 2014, Sidoravicius was an Invited Speaker at the International Congress of Mathematicians, one of the highest recognitions possible for a scholar of mathematics. 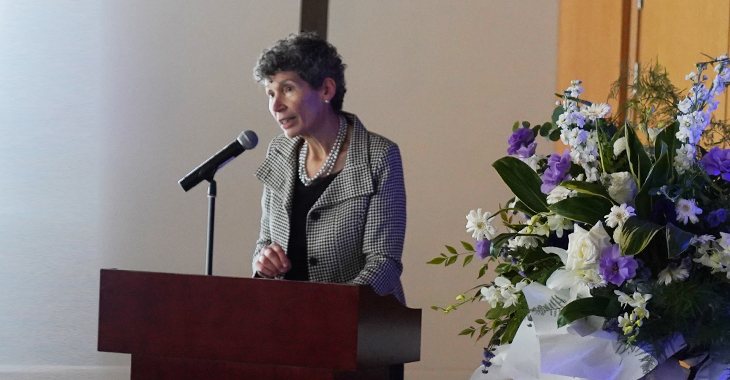 Provost Joanna Waley-Cohen:  "Vladas was characterized by brilliance, by charm, unpredictability,
cultivation, with great enthusiasm for music, and for art, and an intense and passionate demeanor.​"

When he arrived as NYU Shanghai’s first tenured mathematics faculty member in 2015, Sidoravicius got to work immediately.  “He attracted a number of very distinguished visitors to the university, sharply raising the profile of NYU Shanghai mathematics.  He had big ideas and big ambitions, and but for his passing there is no telling to what mathematical heights he might have brought us,” said Provost Joanna Waley-Cohen.

“Vladas always loved discussing new ideas, at any time,” said Maria Eulália Vares, a Professor of Mathematics at the Federal University of Rio de Janeiro and a close friend. “Besides the talent and dedication, he was not afraid of some area due to techniques about which he knew nothing or very little.  If there was some intuition that could be extracted or used, he would find a way to understand the situation, with his big talent to learn from brief conversations to put things together. He was always moved by physical intuition.”

“He had a unique way of getting math done,” said Visiting Assistant Professor Leonardo Rolla, who earned his PhD under Sidoravicius’ supervision. “During math discussions, he would make very keen remarks about the problems he was trying to solve, and then skilfully drag his fellow colleagues to a deep state of laughter and amusement which sparked their creativity to the highest levels.” 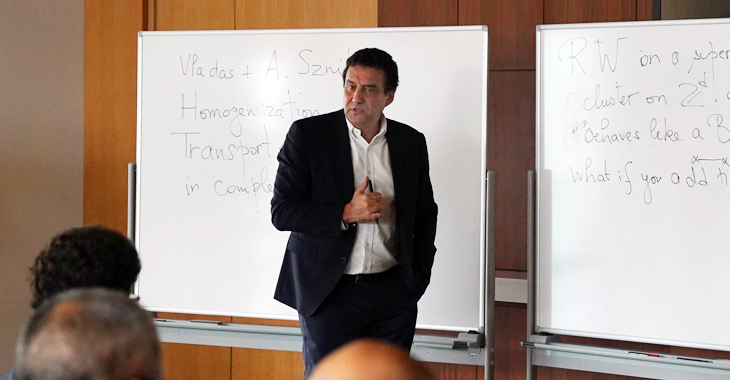 Former Associate Provost and NYU Professor of Mathematics Gérard Ben Arous remembered Sidorivicius' work with a talk titled, “When the going gets rough, do you go faster when you push harder?”

In addition to sharing fond memories of Sidoravicius’ larger-than-life personality, colleagues from around the world also came to Shanghai to review and appreciate his mathematical insights and achievements.  Thomas Spencer of Princeton’s Institute of Advanced Studies, Former Associate Provost and NYU Professor of Mathematics Gérard Ben Arous, Zhan Shi of Université Paris VI, Federal University of Rio de Janeiro’s Leandro Pimental, Marcelo Hilario of the Federal University of Minais Gerais, Tarrès, Vares, and Rolla all made presentations on Sidoravicius’ work.

Sidoravicius was the author of over 100 papers with many different co-authors. His most influential works included investigations of systems of particles and the spread of infections, including the celebrated paper “A Shape Theory for the Spread of an Infection,” co-authored with Cornell University Professor Emeritus of Mathematics Harry Kesten and published in 2008 in mathematics’ most prestigious journal, the Annals of Mathematics.  Vares remembered the two mathematicians “as two very different persons who became much more than great scientific collaborators. They were great friends.”

Beyond his published works, Sidoravicius leaves a legacy of more than a dozen PhD and post-doctoral students, and many more aspiring mathematicians whom he mentored and encouraged.  He had a “capacity to gather people, and especially to attract young researchers,” Vares said.  “During all the activities, he always found ways to support students and young researchers.”

Sidoravicius’ contributions to the university will be long remembered.  Waley Cohen said. “Vladas had made Shanghai his home, as he had made himself an integral part of our great NYU Shanghai experiment, and we miss him very much.”