Shen Zhihua: Why and How Did the Global Cold War Come into Being?

On November 8, NYU Shanghai-ECNU Center on Global History, Economy and Culture (GHEC) held a lecture on “US-Soviet Economic Decoupling and the Making of the Cold War”. The talk was given by renowned Cold War expert Shen Zhihua, Co-Director of GHEC, Distinguished Professor of the Department of History, ECNU, commentated and interpreted by Chen Jian, Co-Director of GHEC, Distinguished Global Network Professor of History, NYU Shanghai and NYU and chaired by Provost Joanna Waley-Cohen.

Shen began the speech by pointing out that traditional interpretations from geopolitics, ideology and security perspectives on the making of the Cold War were insufficient. Based on his extensive and highly original multi-archival research in recent years, Shen proposed that economic factors were the underlying cause of the Cold War. 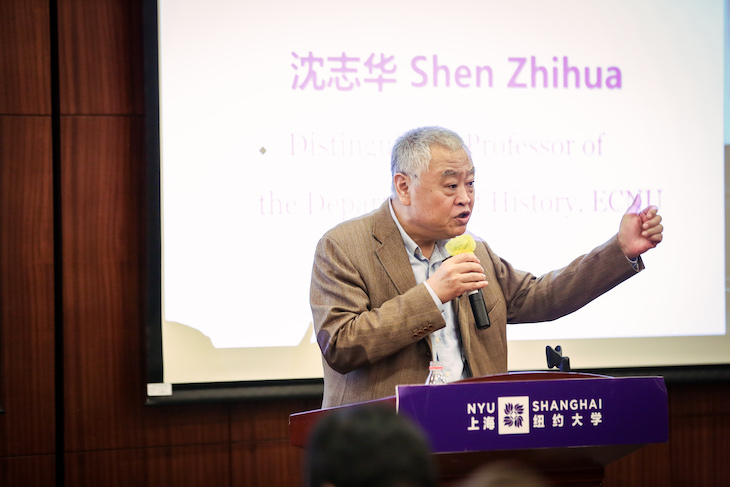 Towards and after the end of World War II, security and economy were the two main concerns in the planning of the post-war world order. Shen believed that the agreement reached at the Yalta Conference and the establishment of the United Nations basically addressed the security concern, while on the economic side, the United States and the Soviet Union could not see eye to eye.

“The United States sought to establish a unified world economy through the Bretton Woods system. It was the hope that the US-Soviet economic ties forged during wartime could bring the Soviet Union onboard to the US-led world economic system. However, due to a series of mutual misjudgments and misperceptions, the Soviet Union finally failed to merge into the Bretton Woods system, which eroded the economic foundations of the U.S.-Soviet wartime alliance, leading up to the outbreak of the Cold War,” said Shen.

“History is a mirror,” Chen commented on the lecture to close the event. “The meaning of history study and research is that it could help us to learn from the past.” About 120 participants joined the lecture both online and onsite.