To jumpstart 2022 and to keep our community connected on campus over winter break, NYU Shanghai rolled out a series of learning experiences and workshops over a month-long Academic Festival. Guided by some 20 expert faculty, student, and staff presenters, we were invited to brush up on our foosball skills, create our own blockchain, hear first-hand stories from an NGO volunteer, and even star in our own improv comedy show.

Here are some of the events that kept our community from hibernating all January: 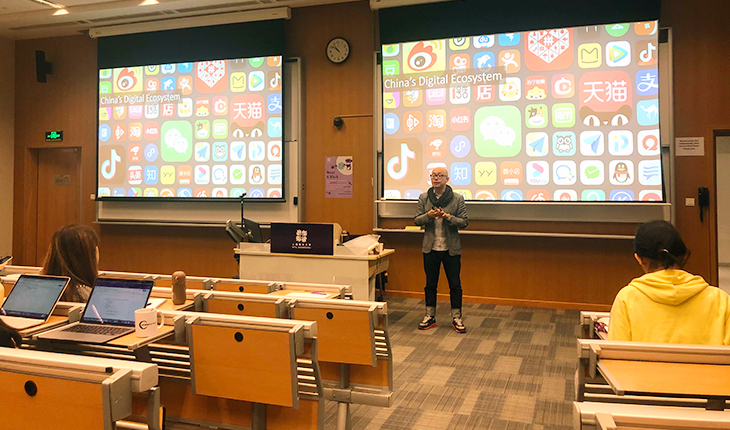 Paul Lin, an Adjunct Instructor from the NYU School of Professional Studies (SPS), took the audience through a journey on the six winning factors of modern business success:

1. Understanding who your consumers are, how they behave, and what motivates them to purchase.

2. Mapping out your brand footprint to realize where your brand can exist and be relevant in specific channels and formats in the digital ecosystem.

3. Crafting your customer journey so you understand all the points they think, behave, and shop for your brand.

4. Capturing data to optimize your brand performance based on KPIs and insights.

6. Offering a bespoke service experience through O2O that is relevant for your customer.

​“The magic happens when you have initiatives that allow for you to build on this foundation, what we call ‘hero’ programs. For example, the special exhibition at an existing gallery or the pop-up store inside a mall or on a high street. If you combine proper hygiene with creative hero programs, then you have a winning combination for modern business success,” Lin said. Volunteering in a Rural High School: Education and NGOs in Today's China

From September 2020 to June 2021, Shi Jiannan ’22 mentored high school students in a small mountainous county in the southernmost tip of Hunan as a volunteer with the NGO, Peer Experience Exchange Rostrum (PEER). At the festival, he shared his reflections on his experience as the manager of the high school’s student life hub and multimedia library and his efforts leading activities on self-reflection, social engagement, and media literacy.

“Cooperation, workarounds, and strategic compromises to achieve common grounds of values between activists and social environments are crucial in initiating social activism,” said Shi. “I hope my presentation encourages students [at NYU Shanghai] to engage in social issues on campus through participatory pedagogy.” 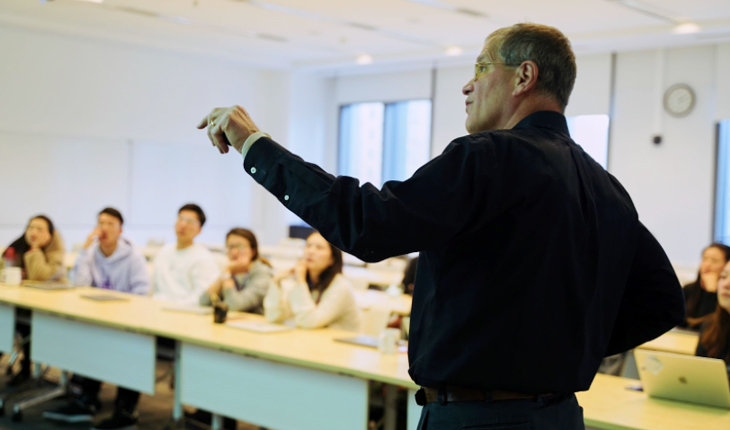 Associate Provost for Academic Affairs John Roberston’s talk on the art and science behind ancient Greek and Roman warfare helped attendees see how strategies developed many thousands of years ago remain relevant today.

“There is a continued fascination in popular culture with ancient western warfare, for example the many combat sequences in the Lord of the Rings movies and the Avengers series with all of their pyrotechnics and CGI have a close resemblance to battles fought by Alexander the Great,” Robertson said.

“The science of warfare, also known as logistics, is working within the constraints of resources, time, and distance to manufacture arms, recruit and train soldiers, and get them and their supplies to a battlefield,” said Robertson. “The art of war is overcoming those constraints, outsmarting the other side, and inspiring soldiers to take the necessary risks to win.”

And while the evolution of technology has greatly changed how wars are fought, Robertson hoped his audience would leave with a newfound appreciation for ancient warfare, which was just as complex, sophisticated, and scientific as combat in the modern world. 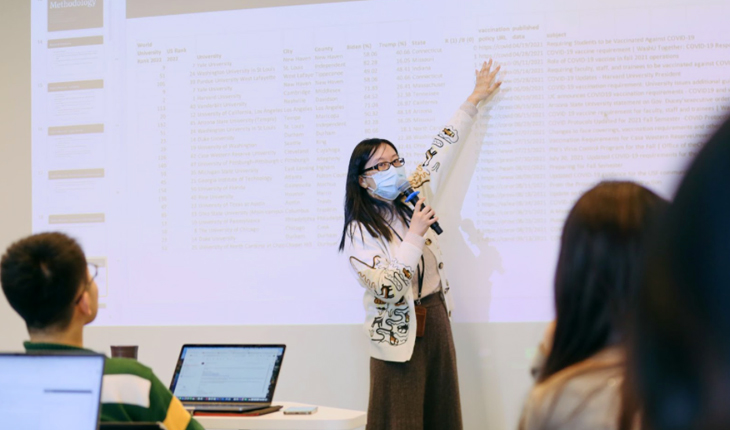 The pair introduced their audience to Voyant Tools, a web-based reading and analysis environment for digital texts, and compared it with Taguette, a free and open-source tool for qualitative research used for importing research materials, highlighting and tagging quotes, and exporting results.

"Our goal was to form an explanation of the causes and consequences of various vaccination expectations…[but] we didn’t see variations between blue and red states regarding university vaccination expectations.” The pair facilitated a discussion with the audience on why that was the case. For teaching purposes, they’d limited the sampling strategy to a convenient but biased one–the sampled universities all fell into ‘blue’ counties, although some of them resided in ‘red’ states. “However…more evidence needs to be collected and examined before one can make any causal claims,” Dai said. “We wouldn’t say that is the cause of no variation revealed.” The foosball tables near the cafeteria are almost never empty. Students and staff alike regularly test their skills against each other at all hours. So it was only fitting for Academic Advisors Sammi Li, Jing Zhou, and Minqing Wang, who have been mastering their table soccer skills since summer 2018, to  bring NYU Shanghaiers together for a bootcamp on game fundamentals, basic techniques, and an intro to Shanghai’s foosball scene.

“We even read a book, Zen and the Art of Foosball, to prepare for the session,” Li said. “Our audience was surprised to learn there’s a group of dedicated foosball players in Shanghai that meet up for weekly practices, who have also worked with the Asian Table Soccer Alliance and have a BiliBili Channel stacked with videos of foosball competitions in China and Asia, as well as foosball tutorials.”

According to the trio, the best foosball defense strategy entails remaining calm and taking control once you have the ball, and for offense, using a combination of speed and precision to pass, shoot, and score.“To play well it’s important to focus and adjust your strategy based on how your opponents play,” said Li. “We had participants who never played foosball in the session and we also had advanced players… It was great to see that advanced players were eager to share their techniques with beginners and were very supportive and encouraging. For any small progress the new players made, everybody cheered.” Build Your Own Blockchain (Excel and Python)

Assistant Professor of Practice in Economics Ilaf Elard hosted three sessions on blockchain and how to build one using Excel and Python with no prior coding experience needed.

“In one sense, blockchains are a data structure–meaning a way to structure or organize data–that lets you quickly compare an evolving data stream to ensure its integrity,” he said. “Blockchains…are just like a book but with a rather funny page numbering system. Instead of having Page 2, Page 3 and so on, each page–or block of data–includes a cryptographic summary called a hash reference of the page prior. This chains all the blocks into a block-chain. The effect is that two people can compare ‘page numbers’ (hashes) to easily verify whether their two copies of blocks of data are identical.”

Blockchain technology allows the decentralized transfer of exclusive digital assets by which copying does not transfer ownership rights or legitimate title claims. “You may try to take a screenshot of my Yu'ebao (余额宝), Alipay, WeChat Pay, or digital art NFT, but that does not make my stocks, money, or digital art collection yours,” Elard said. “This is at the heart of the challenge that blockchain technology presents to financial professionals and financial regulators.”

“The ingenuity behind blockchain technology, its potential benefits but also the concomitant serious dangers and risks it portends, requires citizens, entrepreneurs, and regulators alike to rethink and re-imagine the ancient technology of money,”  Elard said. “To do so at a place such as NYU Shanghai is fitting, as China’s contribution to financial innovations go as far back as inventing paper currency in the Tang and Song dynasties. I would love to see the Academic Festival students return to my class in the Summer 2022 and Fall 2022 where I have the pleasure to teach Blockchain, Cryptocurrency, and Money.” 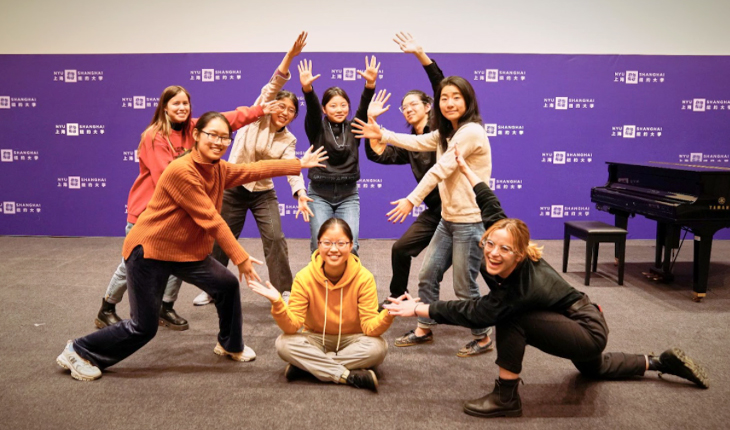 Making It Up as You Go: A Workshop on Improvised Comedy

Senior Global Writing and Speaking Fellow and Shanghai improv performer Isabel Floyd hosted a series of workshops on improvised comedy, getting students to work together in real time to create comedic stories and scenes.

“Improvisation is about connecting to your partner and honoring and accepting what your partner offers you rather than trying to control the scene. It’s about…being brave enough to not know exactly what's going to happen, yet be able to trust the people around you,” said Floyd.

For their final performance, the group performed a game called "conducted story," where four improvisers on stage took turns telling a story acting as the same character, having to connect a narrative on the spot when pointed to at random. Another game, "paper chase" had improvisers incorporating random actions and dialogue written on slips of paper (by the audience) that they picked up off the floor mid-scene, like ‘take a nap on the floor’.

“In addition to being a fun and creative art form, improv is a great way to practice public speaking, collaboration, and quick thinking,” Floyd said. “What can be fun is when you have to fill in the blank, and you kind of just offer whatever comes to mind and sometimes it's kind of strange, but sometimes that strangeness of it can add texture to the scene.”

Interested in learning more about improv in Shanghai? Reach out to isabelfloyd@nyu.edu.