The Consul General of France in Shanghai Axel Cruau told NYU Shanghai students and faculty on Tuesday night that he believed the European Union (EU) would remain strong despite “an underlying sense of crisis” caused by the possibility of Brexit.

“European countries come together because they know they have to for the future of their [countries] and for their children. And that will happen again,” Cruau said in an evening presentation on campus on February 26. “We need those moments of reckoning to get people back together to what’s really important.”

Cruau stressed the importance of acting as a global citizen in times of upheaval.

“I try to teach my young children that the two flags [France and  EU ] are important. We can all have multiple identities,” he said. “You’re a member of your family, of your city, of your country, why would it be impossible for you to be a member of one country and also a member of the European Union?” 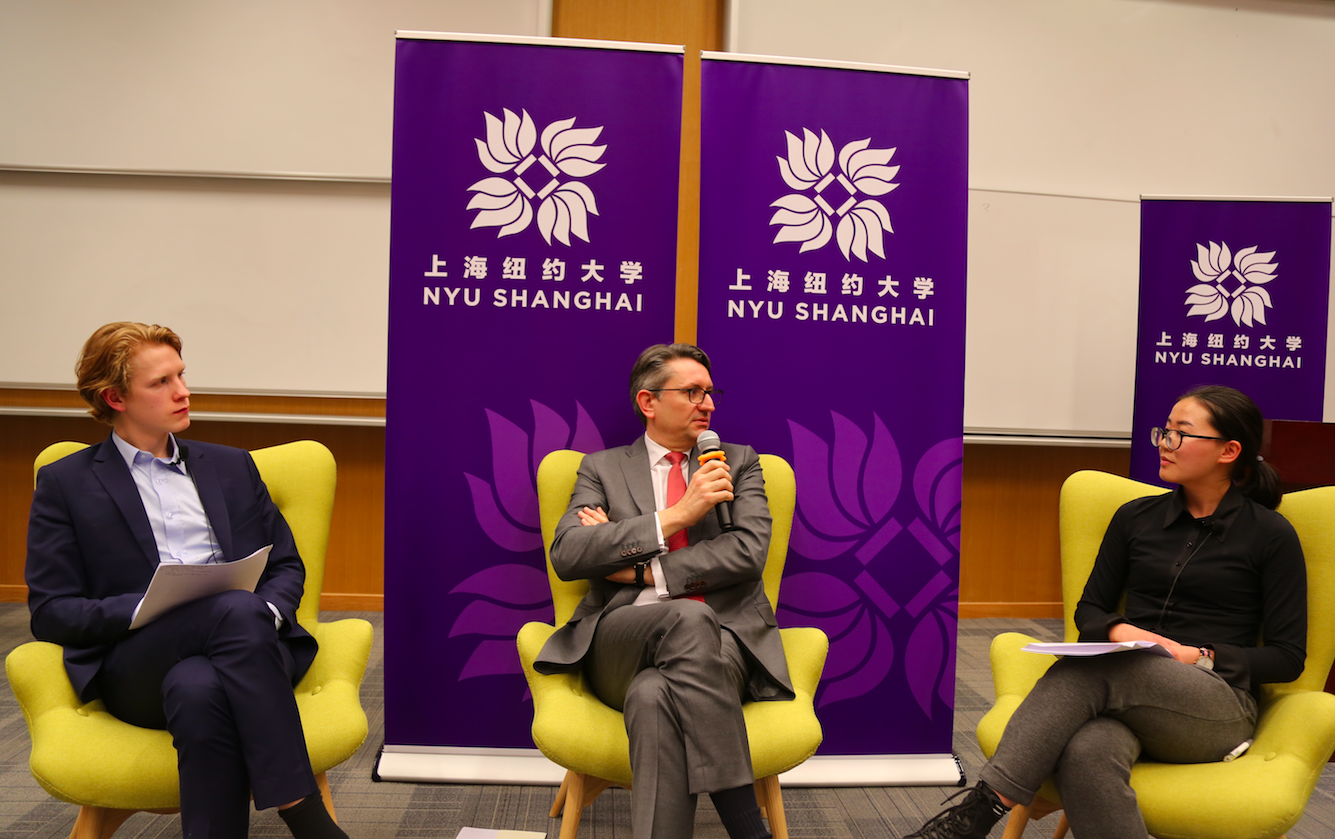 Andreas Strandgaard, ‘19 and Freya Yao, ‘21 in conversation with Cruau

Yao asked Cruau what he finds unique about Shanghai, “Every morning I wake up in Shanghai and say ‘Yes, let’s do something different.’ There is really something happening here, you can be useful, you can serve the people,” he replied. “There is a sense of ‘Hey, the future is built here, let’s be a part of it’.”

Cruau has been Consul General in Shanghai since June 2015, after having served in a similar capacity in Los Angeles for three years. He also served in Beijing from 2009 to 2010.

As the head of one of France’s six Consulates in China, Cruau said he acts to “defend the interests” of France, which includes supporting French business and academic communities, and ensuring that the rights of more than 8,700 French citizens living in Shanghai are protected. Answering a question about his own career path, the Consul General said he never expected to end up in international diplomacy and credited much of his professional success to chance and good fortune.

“I did what I knew I was good at, what I really wanted to do, and it worked. I had great teachers who really helped me and told me that the most important rule is know yourself and believe in yourself,” he said.

Cruau said that while much remains uncertain as the world continues to change, he is confident in France and the European Union’s abilities to adapt for the future.

“The only thing we know is that those types of societies, political bodies, social bodies, will evolve,” he said. “We know that we will evolve and we will have to evolve. It’s impossible to tell what France is going to be in 20 years or 30 years, I just know that it will be here.”