Chaotic Walks out from Steadiness

It is far easier to follow a stick floating on a slowly moving stream than to trace a bottle bobbing in an angry sea. With random movements, unexpected turns and uneven displacements, the path of the bottle is almost certainly what a physicist would call chaotic.

While it seems unlikely, might the floating stick also show such path chaos? In a newly published article in the journal Physical Review Letters, NYU Ph.D. student Shi-Yuan Hu and his colleagues reveal that it is indeed possible to discern the chaotic path of a floating stick, especially if the stick, or “structure,” as the authors call it, has a size comparable to the eddies of the slow-moving flows. Their study, which took place in part at the NYU-ECNU Institute of Physics at NYU Shanghai, also showed that, in addition to the path chaos, the floating stick can be trapped in an eddy, wander aimlessly, or move along a straight line with zigzag steps.

"All these behaviors depend on the structure's size and rigidity. And it is surprising to see chaos arising from a low Reynolds number system like ours," said NYU Shanghai and NYU Professor of Physics and Mathematics Jun Zhang. The Reynolds number is a measure on how active a fluid-structure system can be.

Researchers observed how a flexible structure was carried by an array of small rotating flow eddies. They focused on how structures of different lengths and rigidities moved about over very long periods of time.

"The background flow is trivial, being slow and steady, but once the elongated structure is placed in it, the interaction between the structure and the flow becomes interesting and unexpected. It's almost like a billiard ball being softly bounced back and forth by the flow's eddies," said Professor Michael Shelley, a math professor based at NYU and the Flatiron Institute.

The study consisted of both numerical simulations and experimental observations. Hu, a rising 5th-year Ph.D. student at NYU, is the paper’s lead author, followed by Jun-Jun Chu, a 2nd-year Ph.D. student at Tongji University who is also a research assistant at NYU Shanghai. Professors Shelley and Zhang are the corresponding authors of the paper.

"Since structures of different lengths behave differently," Hu and Zhang further comment, "Our findings may be used someday in the sorting of biopolymers such as large DNA molecules." 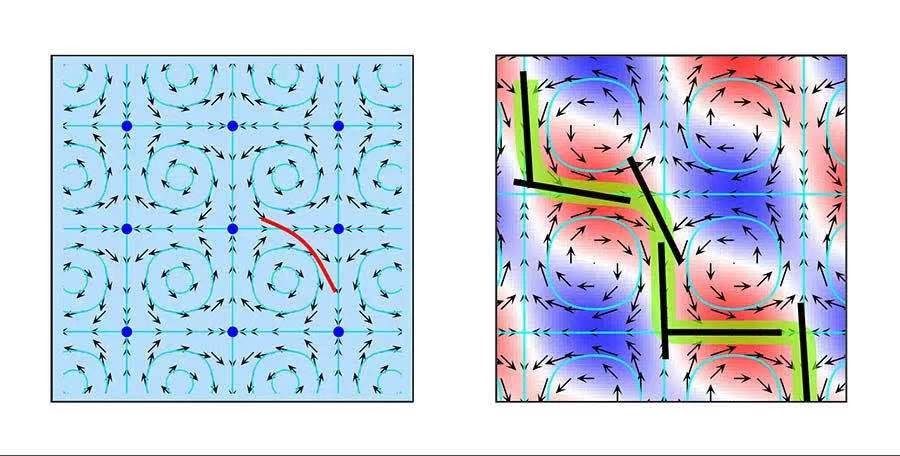 A semi-flexible filament interacts with an array of spinning flow eddies. Depending on its length and rigidity, the filament could undergo chaotic motion, or move along straight lines, and even become trapped. Image copyright to the first author Shi-Yuan Hu.