Chain reactions: TEDxNYUShanghai shows the power of a single act

A drop in the ocean, a ripple effect, a chain reaction. No matter how they put it, speakers at the third annual TEDxNYUShanghai event on November 16 rallied around one idea—that a single action can have powerful impacts.

The day’s five speakers encouraged students to take actions, no matter how small, that could positively impact themselves, those around them, or even to help change the world.

This year’s speaker theme, “chain reactions,” built on last year’s “pioneering” theme, exploring the next chapter in a student’s story of building towards success, said Lili Huang, ’22 and president of the TEDxNYUShanghai club, which spearheaded the event.

TEDx events provide a platform for chosen speakers to give short speeches designed to spread ideas, spark creativity and challenge convention. TedxNYUShanghai holds a license from the non-profit TED organization.

Together with eight other leaders and 170 club members, Huang said the goal of the day was to expose attendees, many of whom were first years, to new ideas and ways of thinking.

One of those perspectives came from Royce J. Hauw, a global executive recruiter and CEO, who encouraged students to take risks while in college and to understand the importance of adding value wherever they are. That value, he said, will have a chain reaction towards success. 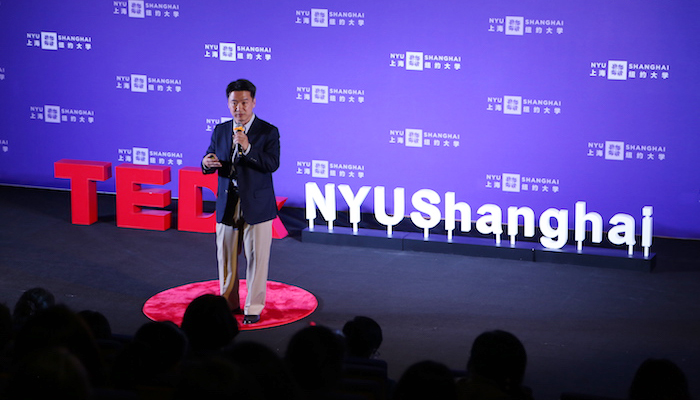 “I ask people what risks have you taken, how have you expanded yourself. We don’t put ourselves at risk enough,” he said. “Take risks when you’re in college. Extend beyond yourself. Recognize that you can be much, much more than who you are. Seeing how much you’ve grown, that’ll make you successful.”

When it comes to taking a risk to find the highest value, both Wang Renxin and Robert Kormoczi testified to the positive ripple effect of actions in their lives.

Kormoczi, who is an entrepreneur, author and founder and CEO of Times International, spoke of his decision to leap from a clear career path laid out while a university student in Denmark to pursue his own passions in digital marketing and journalism. His experiences, both as a child moving from his own country in Hungary to South Africa and as a college student, led him to discern three actions that he believes create a positive chain reaction in one’s life for fulfillment—finding a purpose, building meaningful relationships, and narrating your own story. 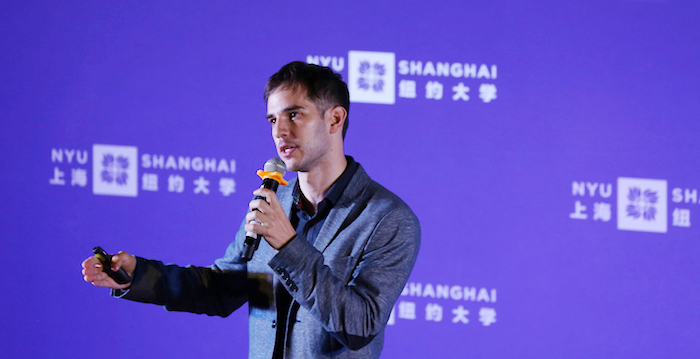 “I believe these are the three attributes that can create a chain reaction in your life and help you to have a more fulfilling life,” he said. “I know that true fulfillment is something that’s really, really difficult to find, but even pursuing it, even setting yourself on that path is a step worth taking in this life.”

For Wang, the chain reactions that have been most important to him are the ones he’s created as an NGO leader, helping to break down Asian stereotypes in foreign countries, particularly in Hungary, where he’s currently pursuing his doctorate. Through the work of his organization the Europe-China Youth Leaders Forum, which launched last year to bring young people from across cultures together, Wang said he’s seen first-hand the impact exposure to other cultures can have to not only push past stereotypes, but to bring people from around the world together.

To students looking to build their own NGOs one day, Wang encouraged them to become leaders in other aspects of their lives first, and then use that platform to create a successful NGO.

Kelly Wang, ‘23 and Zhang Yuanxin  ’23 said their favorite speaker of the day was Qiu Zhengzheng, an educator and English language teaching expert.

Qiu spoke about how he improved his English by watching the movie, “The Shawshank Redemption,” 70 times in three months while in college. Qiu said that by doing so, he dissected not just the grammar and vocabulary, but every single aspect of the film, such as the cultural references and English idioms. Watching the movie set off his chain reaction to decide to teach English as a foreign language, beginning at the  extremely popular New Oriental school [in Beijing] .

Wang said she appreciated Qiu’s speech for its creativity and clear message. It inspired her to try improving her English through movies, beginning with her favorite, “Me Before You.” 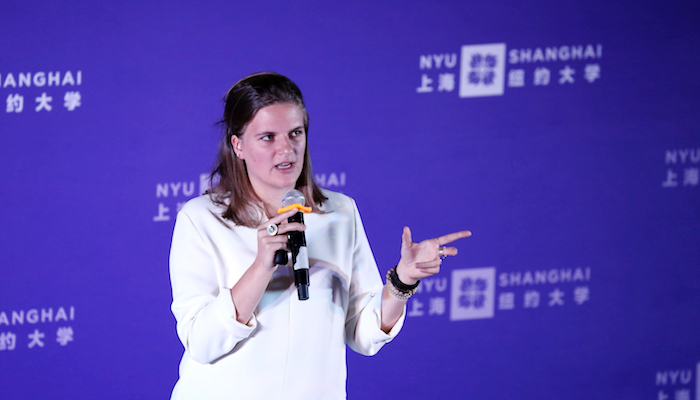 Founder and director of the Shanghai-based sustainability consultancy firm Zer’0 Waste Alizée Cem closed the day’s event by encouraging students to set off a chain reaction in their communities to lead more sustainable lives.

Cem admitted that it can seem overwhelming at first to decide to cut down on waste, but that each decision, even simply not to use a plastic bag or a disposable coffee cup, makes a difference. It’s these choices, she said, that when brought together collectively, can change the world.

“The ripple effect, the chain reaction, it’s not always visible, it’s not always obvious. Because we’re all just like thin threads in a big tapestry. And we don’t often just take a step back to have a look at the big picture, we’re just in it,” she said. “But the moment one of us changes, it has ripple effects. It’s one drop in the ocean. Whatever you choose to do, please start today."