An exhibition featuring the works of Taipei-based artist Yin-Ju Chen and shaman practitioner Li-Chun Lin (Marina) has opened at NYU Shanghai’s Institute of Contemporary Arts (ICA). Close Your Eyes and You Will Know originally opened in March 2022, but was closed after just eight days because of the Omicron outbreak and ensuing lockdown in Shanghai.

The exhibition is the second of a four-part series that comprises the ICA’s second biennial artistic research program, Another Knowledge Is Possible (2021-23). The program seeks to explore neglected or repressed forms of knowledge — such as, in Chen and Lin’s case, the insight derived from shamanic practices.

“Shamans are spirit mediums who are capable of shifting their consciousness to obtain information not ordinarily available to other humans,” said Iris Zhu Sicong, Assistant Curator at the ICA. “They use that information to help and to heal community members.”

The exhibition consists of a single artistic project, Sonic Driving, which is a joint collaboration between Chen and Lin. Through their work, the artists invite audiences to experience and experiment with shamanic methods. Video and sound installations, along with drawings and paintings, create an immersive experience for visitors.

The title of the exhibition also functions as directions for the audience. “I wish for the audience to be able to suspend their disbelief and make space for a miracle of magical thinking,” said Lin. “We can close our eyes to see more, and turn off our brains to know more.”

Shamanic practices brought Chen and Lin together in the first place. They first met in 2015, when Chen was working on a different art exhibition. They did not reconnect until three years later, when Lin heard an inner voice telling her to look for Chen.

“I didn’t even remember her name,” Lin said.

“Lin is my teacher and shaman,” Chen said.

That same year, the pair began collaboration on Sonic Driving. Chen found it fruitful to integrate the shamanic workshops with her art. “Other than exhibiting artwork as I normally do, having the audience experience the shamanic journeys is one of the most important factors in this project,” she said. 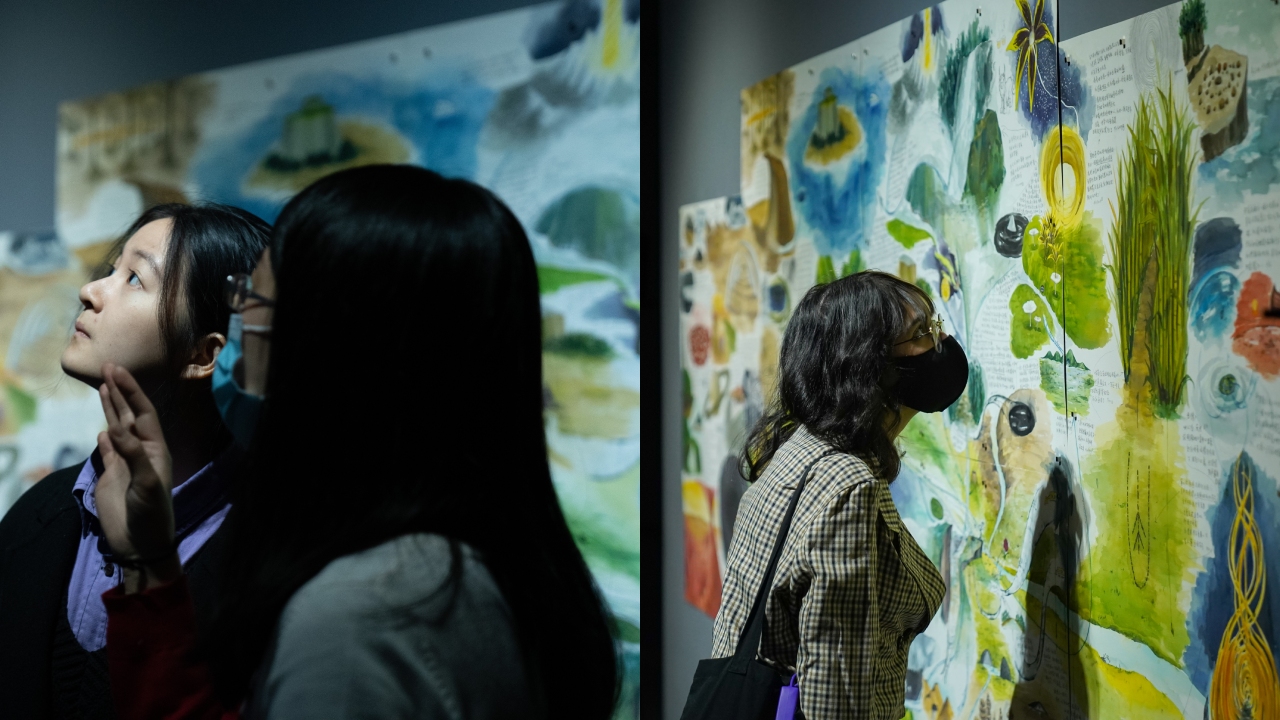 Students view the exhibition in the ICA gallery.

The exhibition contains floor mats, inviting visitors to lie down and feel the sound of the drumming wash over them. In April, the ICA also hosted an online oracle assembly workshop as part of the exhibition, in which Lin guided participants on a shamanic journey.

Sonic Driving takes its name from shamans’ use of percussive sound to enter an altered state of consciousness. Within the exhibition itself, this percussive sound is a constant presence. An eight-channel sound installation of Lin’s drumming creates an immersive experience for visitors. Moreover, two speakers at the center of the exhibition create a binaural audio effect, in which two tones with slightly different frequencies play at the same time to create a special sound perceived only within the brain. The binaural audio effect is known in shamanism for inducing an altered state of consciousness.

At the very heart of the exhibition is an ink drawing by Lin. The drawing depicts the Chinese character wū (巫), which means “shaman” or “sorcerer” and serves as a key symbol of many shamanic cultures’ cosmology. The character is comprised of elements representing heaven and earth, the upper and lower worlds, as well as men and women (or yin and yang) and the axis mundi, the world pillar, which the shaman - who connects heaven and earth, yin and yang - uses to travel between all three worlds. 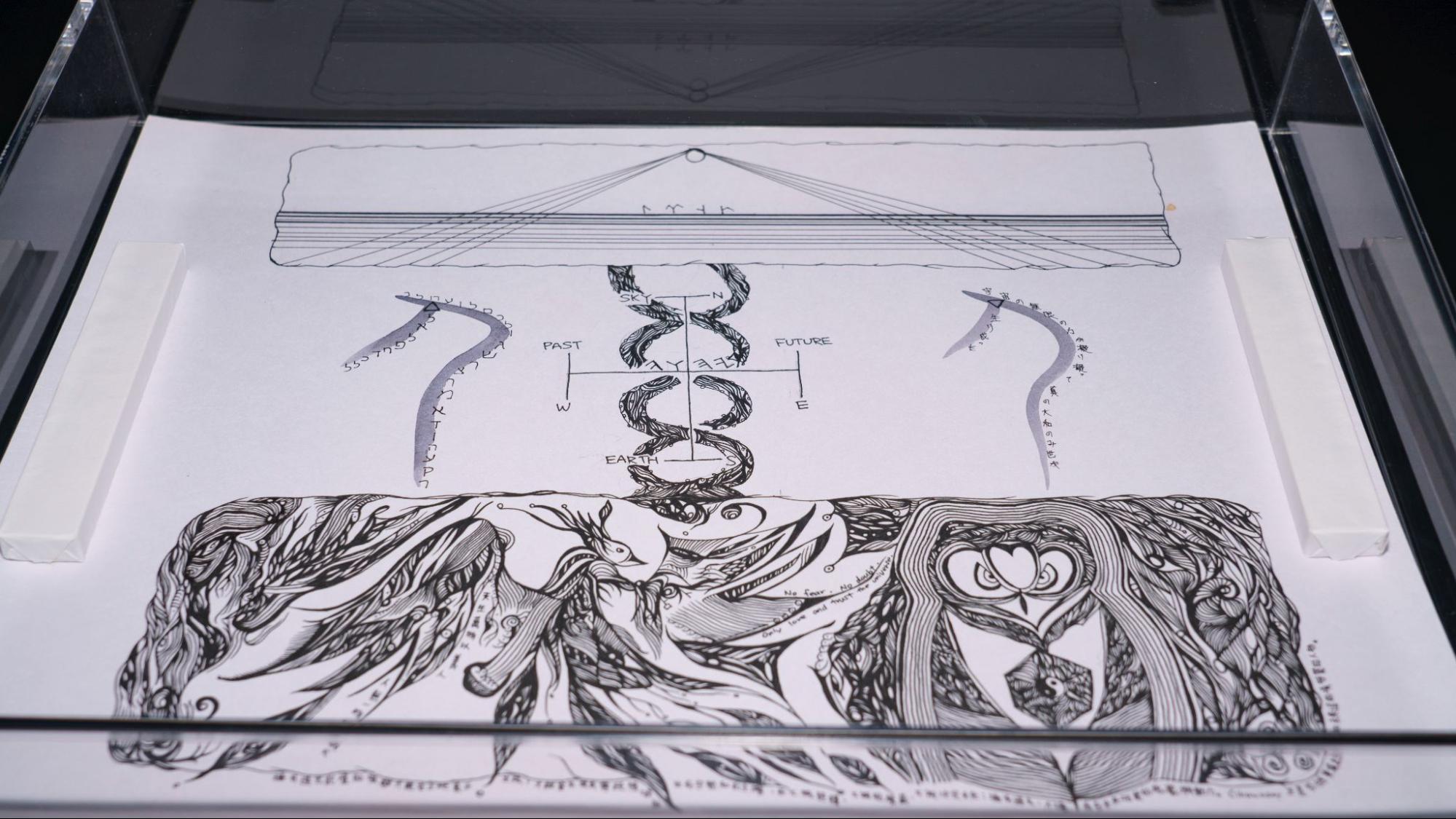 This three-tiered cosmology is also reflected in the work in the exhibition. In addition to the sound installation, the middle world is represented by four projections on the ceiling — documentation from workshops that Lin and Chen hosted in 2018, in Taipei and Shanghai. In these workshops, the artists guided participants to seek oracles that would respond to questions such as “What will our world look like 100 years from now?” and “How will artificial intelligence affect humans in the future?”

The upper world of the exhibition is represented by a video installation made by Chen, who has worked as a professional artist for over twenty years and has exhibited her work internationally. In the video, Chen intertwines physical journeys to northern Mongolia and Lake Baikal in Siberia — where shamanism originated — with a tunnel-like visualization of her spiritual journeys to the upper world.

Meanwhile, a large board featuring six of Chen’s watercolor paintings represents the lower world. The paintings are documentation of Chen’s shamanistic practice. The images form a map of places where Chen successfully entered the lower world, and pencil markings indicate the date of each journey as well as what she observed.

“I came to this strange place,” says one marking.

“The ground surface was of crimson color,” begins another. 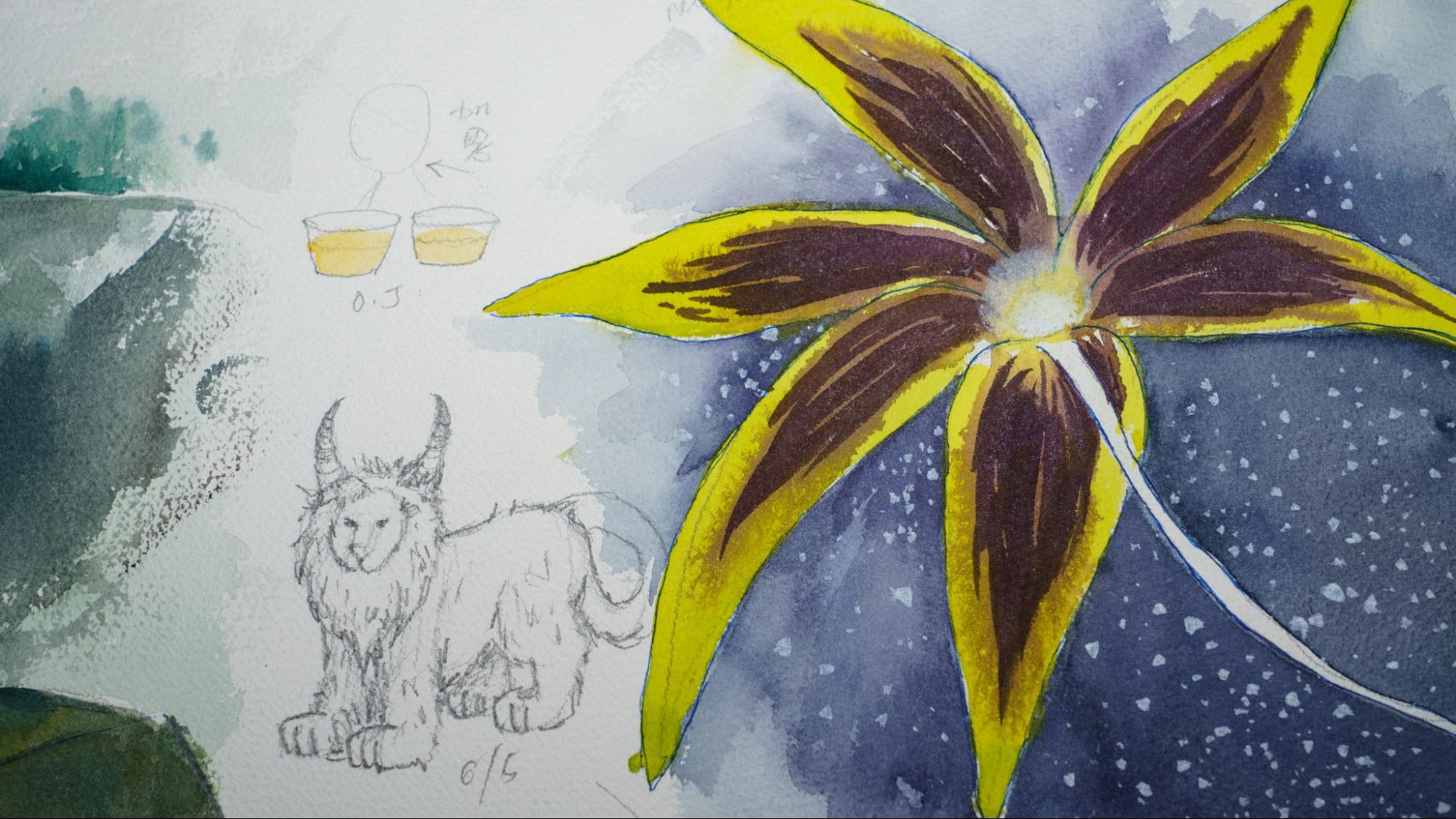 One of Chen’s watercolor paintings for the ‘lower world’ portion of the exhibition. Credit: Zhu Zhenyu. 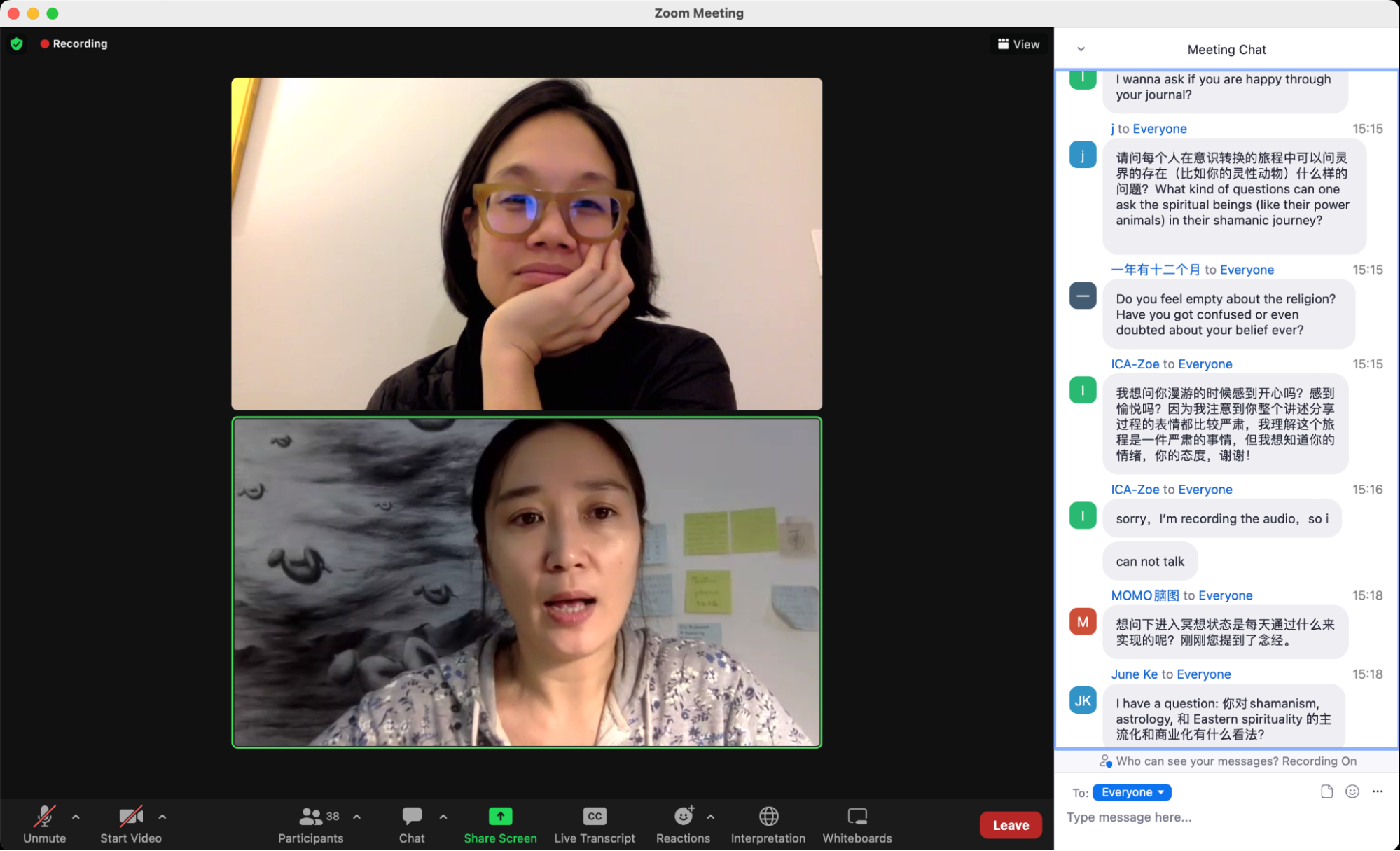 The interactive nature of the exhibition extends to educational programming. Despite the interruption caused by Shanghai’s lockdown, there have been online workshops and talks throughout the year. In addition to the oracle workshop, Lin gave a talk on gnosis-shamanism and magic in April, and in May, curator and writer Boliang Shen led a discussion with former Postdoctoral Teaching Fellow Yupeng Jiao on art and spiritualism. Most recently, Chen delivered an artist talk titled “The Way to Mandala: The Artistic Practice of Connecting the Self to the Universe” on October 22.

Close Your Eyes and You Will Know is open for viewing at the ICA gallery on weekdays from 11:00 a.m. through 7:00 p.m. until December 16.