Tasting the Past: Food in Chinese History

NYU Shanghai Provost Joanna Waley-Cohen says she first became interested in the history of Chinese food while working on her PhD in the 1980s. One afternoon, she was struggling to understand an 18th century military campaign report written in classical Chinese, when a whole new field of study revealed itself.

“I thought, ‘ugh, this is so difficult, what does it mean?’ Then I realized what it said, ‘What should we serve to the troops? We should serve rice noodles because you can soak them in water...and you don’t have to light a fire, so the enemy on the opposite hillside can’t see where you are.’”

“I was actually eating rice noodles at the time! I had soaked them in the morning and mixed them with vegetables. So it was sort of, ‘oh my god, this is a topic I should study,’” says Waley-Cohen.

This semester, on Mondays and Wednesdays at 8:15 AM, you can find Waley-Cohen teaching “Food in Chinese History,” where she leads 31 students on an exploration of Chinese culinary history and its influence on Chinese culture, society, and politics. Along the way, students consider such issues as the Chinese taboo against beef, the opium trade, the introduction of foods from the New World, and street food.

“[Some academics] don’t think food is a serious topic. Whereas in fact it applies to everything,” says Waley-Cohen. To illustrate her point, she points to the arrival of New World foods in China at the start of the 16th century -- peanuts, corn, and most importantly, sweet potatoes. 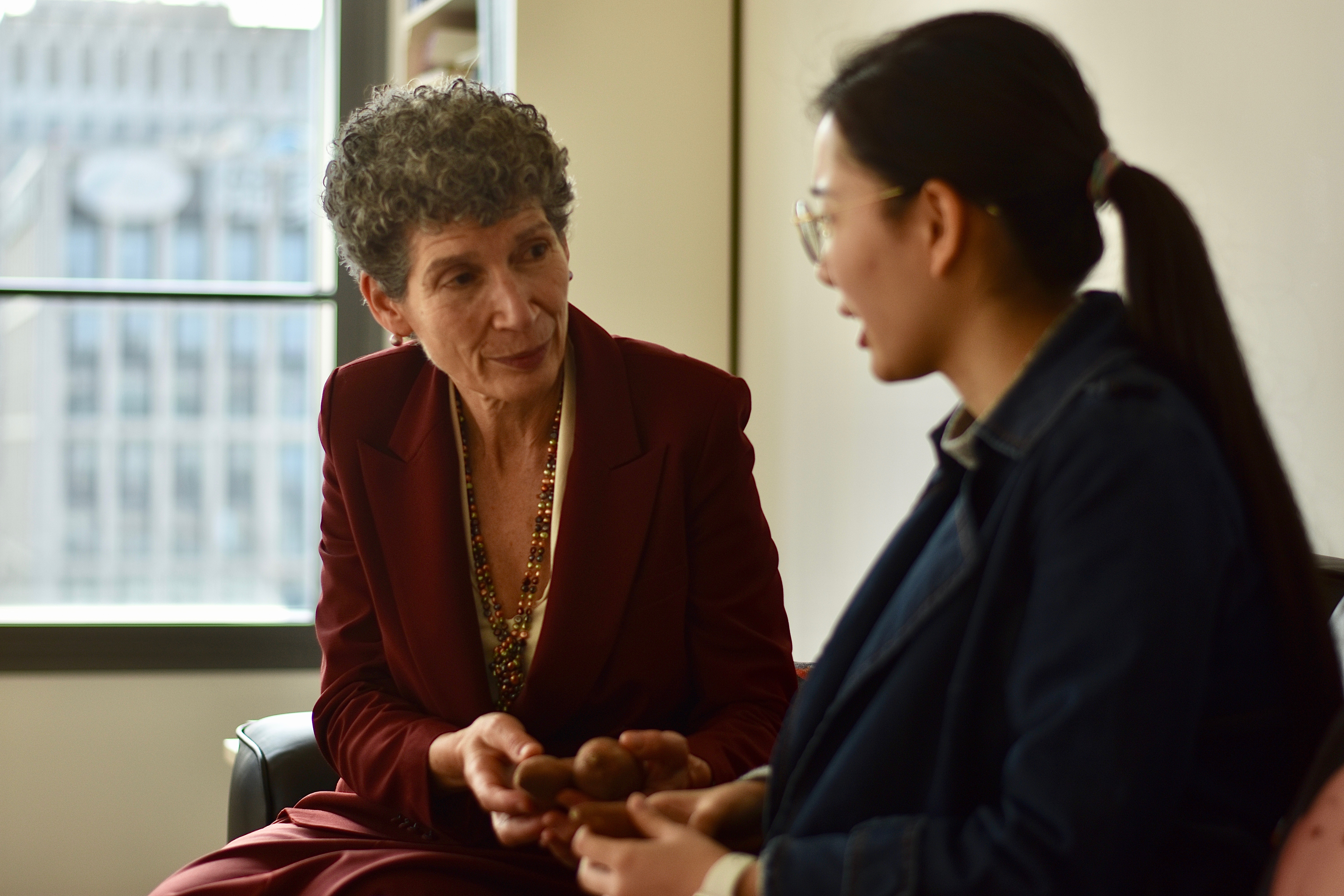 Joanna Waley-Cohen and Victoria Fu ’20 discuss the impact of sweet potatoes on the course of Chinese history.

“Really soon after 1492 when Columbus arrived in the Americas, these foods…got across the world....including sweet potatoes, which will grow where nothing else will grow,” says Waley Cohen. “Some smart official...realized he could address the risk of famine by growing this strange new crop...which meant that [the sweet potato] was the foundation of the population expansion...by the 1700s the population of China more than doubled. So it’s about demography as well. Food is about everything.”

Victoria Fu ‘20 a business and finance major who is also minoring in mathematics and history says that courses like Food in Chinese History have shown her a different approach to studying history -- a subject that she has been passionate about since middle school.

“It’s more about cultural history than my previous courses, which focused on political and economic history,” says Fu who now intends to pursue East Asian Studies in graduate school. “From food, I can understand the daily life of the Chinese population and how it changed over time...in an individual way that is very human.”

Throughout the semester, students read chapters from Of Tripod and Palate -- a compendium of scholarly writings on food, politics, and religion in China. Textbook reading is supplemented by additional primary texts such as, “Cloud Forest Hall Collection of Rules for Drinking and Eating” by Ni Zan, a Yuan Dynasty painter, and Yuan Mei’s Recipes from the Garden of Contentment (Pinyin: Suiyuan Shidan), a well-known 18th-century collection of recipes and culinary advice.

The subject is rich in primary historical texts, Waley-Cohen says, since for some Chinese scholars, writing cookbooks and essays about food were as important as writing poetry and painting.

Students also watch episodes from an online documentary series about food, and view films or read novels that involve opium, such as Flowers of Shanghai and Temptress Moon. They must attend at least two of five campus-wide lectures by guest speakers held throughout the semester. For these talks, Waley-Cohen invited food historians from around the world to speak on topics such as the inspection of excrement and other bodily outflows in Chinese medicine, restaurant culture in Brooklyn, “Chinese restaurant syndrome,” and the movement calling for safer, “greener” food in China.

To close out the semester, students write a paper on a topic related to food in the context of consumption and history, and also select a region of Chinese cuisine to study and present to the class. Christina Bowllan ’22 chose the cuisine of Inner Mongolia for her project.

Meals photographed by Bowllan during her trip to Inner Mongolia.

“I looked at Inner Mongolia because I was up there for a week over National Day. I learned that Mongolian and Chinese cuisine come together within Inner Mongolia and it’s sort of this hybrid province,” says Bowllan. “The food there is very similar to a lot of Muslim majority areas like Xinjiang and Pakistan. They have milk tea and shumai and lamb..... So it felt like this cool middle ground.”

Bowllan says that the course’s innovative approach to studying history has helped her rethink trends she has observed in Shanghai, such as the disappearance of street food.

“A week ago, I saw some remaining street food by our dorms and I thought back to this course and I thought...wow, this might just be one of the last times I can be a part of that community,” says Bowllan. “In the push to develop and modernize Shanghai, they’re getting rid of...something that brings people together. This is a real-life example of what we’ve been studying, how it’s not just about the food, but about the community and social aspects as well.”