Over winter break, students in NYU Shanghai’s Diversity Initiatives LEAD Program completed six projects addressing topics of gender, culture, disability, LGBTQ+, and more. The LEAD program is a series of courses, workshops, and projects centered around promoting awareness of diversity and inclusion at NYU Shanghai. The Diversity in Action showcase marks the completion of the second phase of the four stage program.

Students described their work in posters and booths presented at a showcase on February 26. Below are their posters.

His Job, Her Body, and Our Surroundings

The Project: A video and art installation that highlights gendered messaging in Shanghai metro advertisements, and examines how our surroundings impact our notions of gender. Why he chose this topic:

“I wanted to show how our surroundings might influence our ideas of gender stereotypes. I went to 10 metro stations in Shanghai and cataloged gendered advertisements, analyzing their potential influences on people. I also turned to feminist literature and learned that that advertisements often mirror mainstream society’s concept of gender, while simultaneously shaping how we think. By investigating the ads around us, we can get a sense of how gender stereotypes play out in our minds.”

See the Person, Not the Disability

The Project:  An interactive media archive of a Disabilities Day Veronique participated in on January 18 at Bishop Anstey High School East in Trinidad and Tobago. 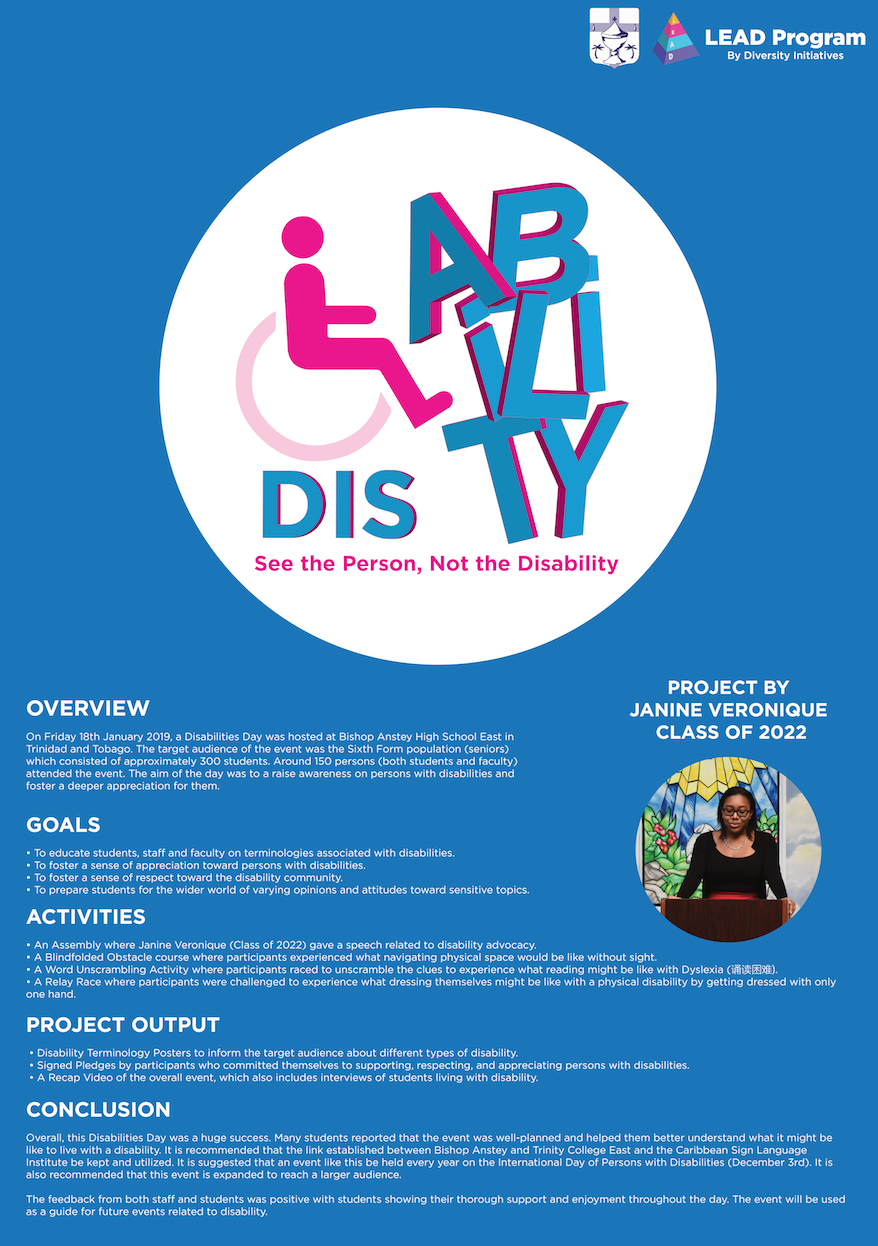 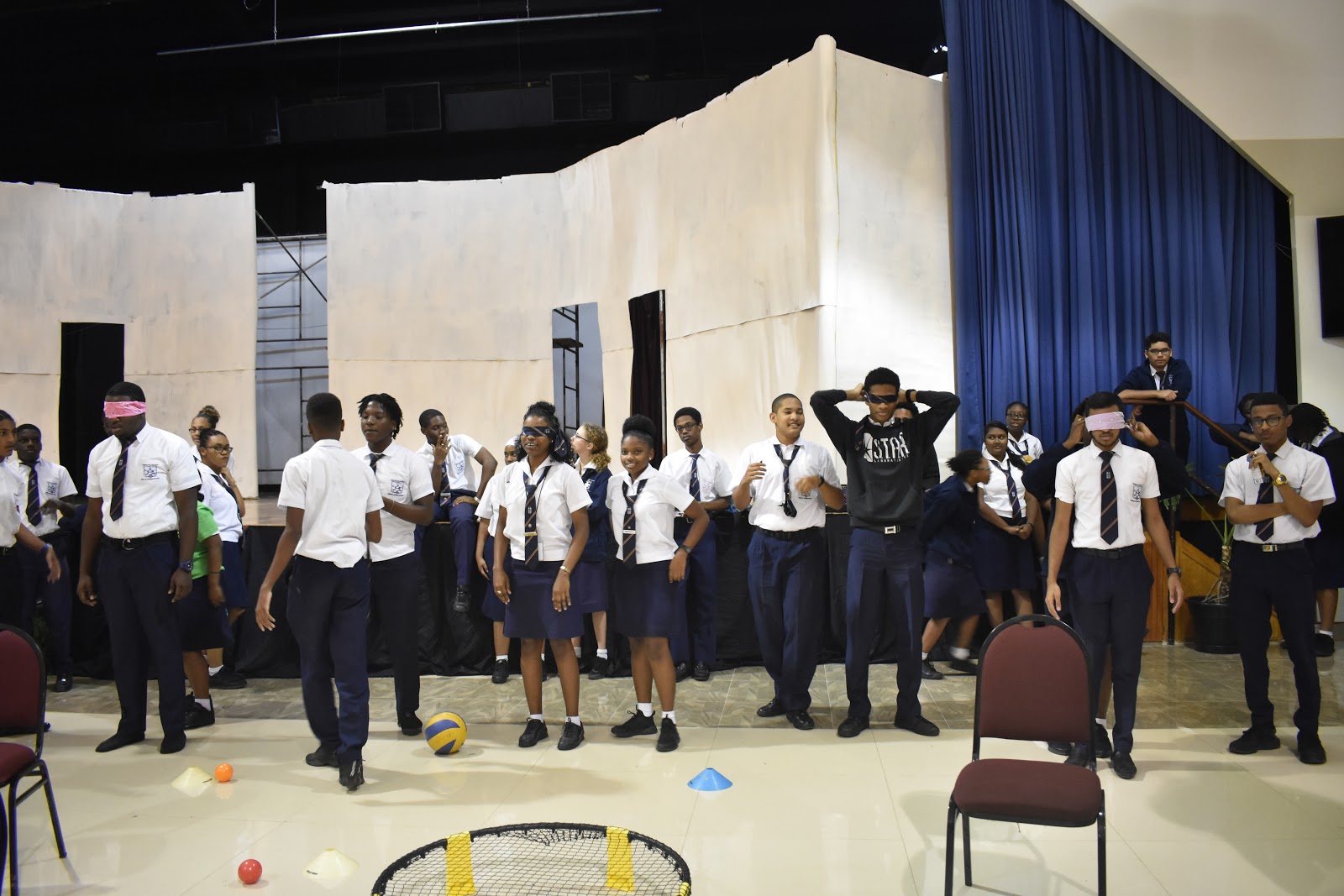 ​
Why she chose this topic:

“We hosted a day like this at my hometown high school because we wanted to let others experience life for someone with a disability. During the event, I gave a speech about disability advocacy. Our activities included an obstacle course to let people who can see experience navigating physical space without sight, a word-unscrambling activity that mimicked the experience of reading with Dyslexia, and a relay race that challenged participants to dress themselves with one hand. The struggles of living with disabilities are often overlooked in society, so it’s important to foster respect towards the disability community, and prepare students for the wider world of varying opinions and attitudes.”

The Project: A two-part podcast series in Chinese that focuses on gender identity and gender equality in higher education. 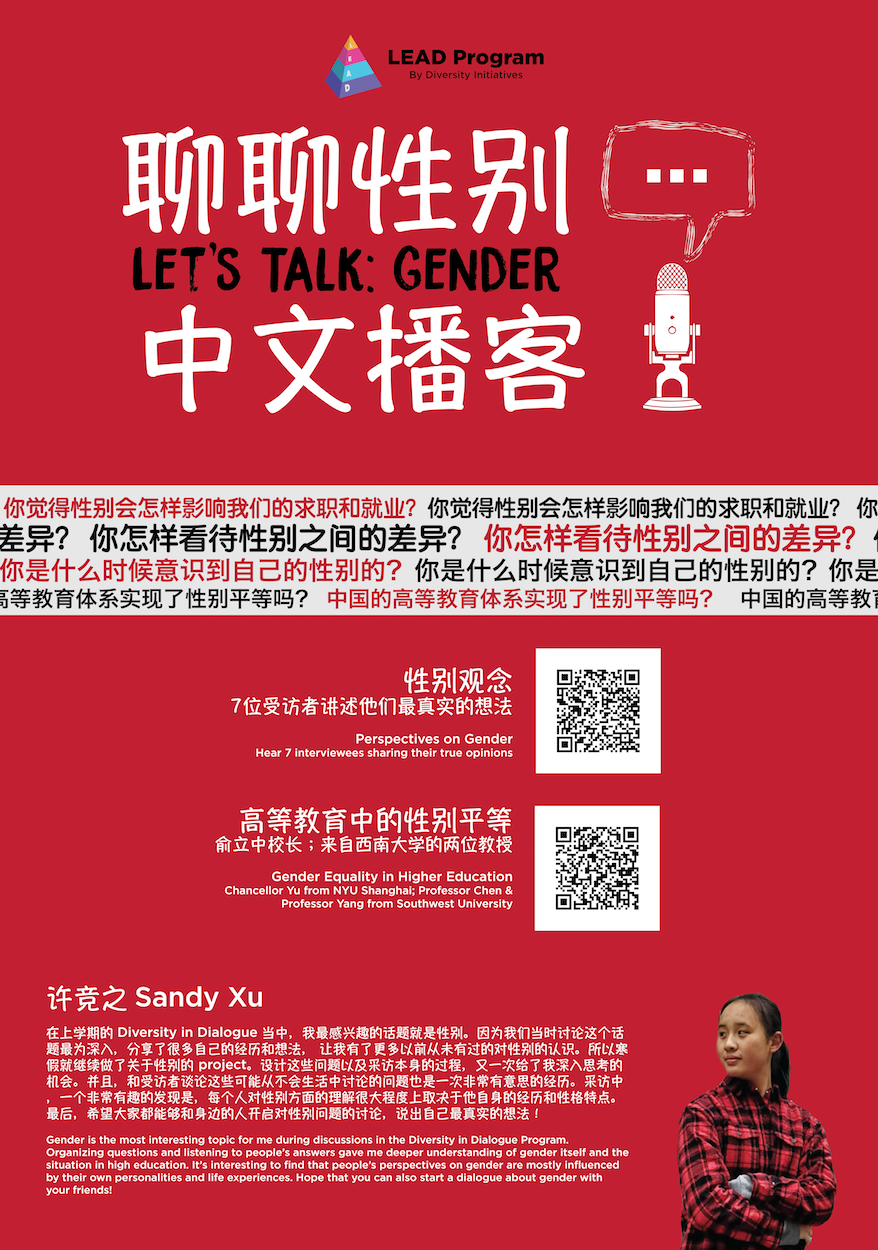 “Last semester, during our Diversity in Dialogue discussions each week, gender was the topic that inspired me most, showing me new perspectives…. I interviewed seven people for my podcast on gender identity, and asked them about their opinions of gender based on their experiences. One male interviewee said: ‘Men are more controlling and more likely to drive a car because they like to control machines.’ And I thought that was pretty interesting because he liked driving of course, so I saw how his experiences influenced his ideas about gender. You can hear my podcasts by scanning the QR codes on the poster!”

The Project: A photo-story project exploring why people ritually visit Jing’an Temple during Lunar New Year’s Day, and their feelings about an engraving inscribed on the temple’s south gate wall. 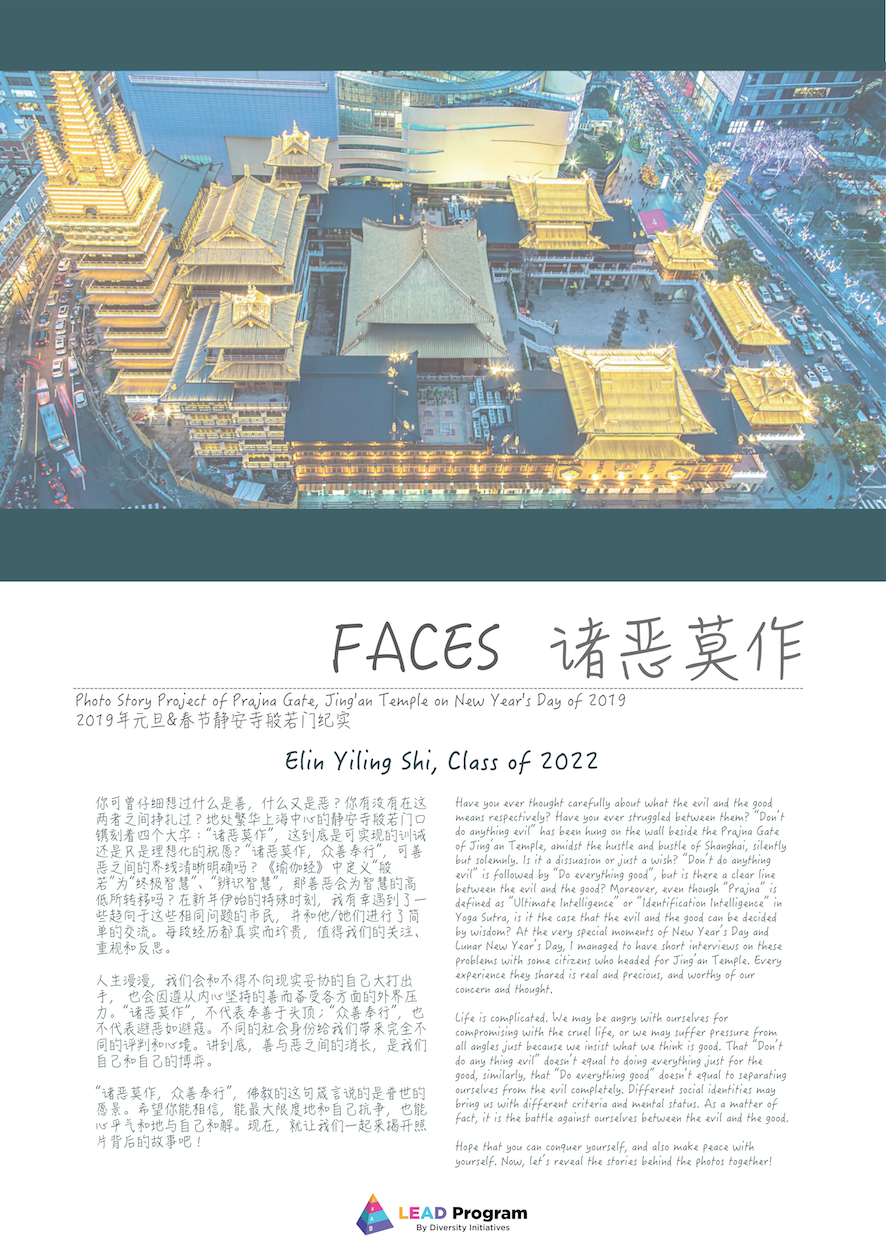 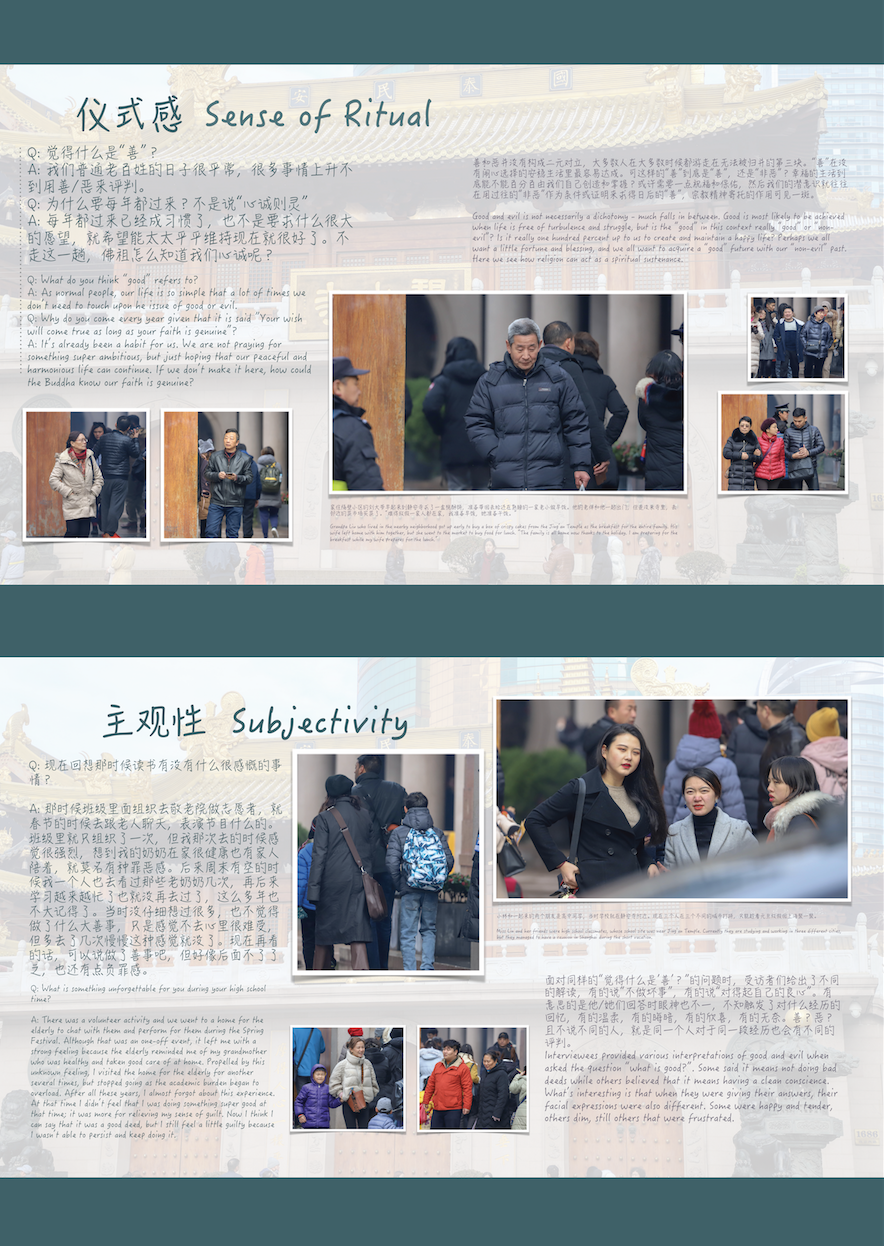 "My mom, who is not Buddhist, nevertheless has the ritual of going to Jing'an Temple every Lunar New Year. I have actually asked her several times, ‘If you are not Buddhist, why do you go there so frequently?’ I also noticed an engraving on the south wall of Jing’an Temple that says: "诸恶莫作" which means 'don't do anything evil.’ This made me curious about different definitions of good and evil. It was very interesting to me, as a local Shanghainese person, to learn how different cultures have different beliefs about good and evil, purity, subjectivity, university, and ritual.”

LGBTQ+ Inside, Outside & Around the World

The Project: Interviews about the LGBTQ+ community with individuals from the US, China, and Singapore. 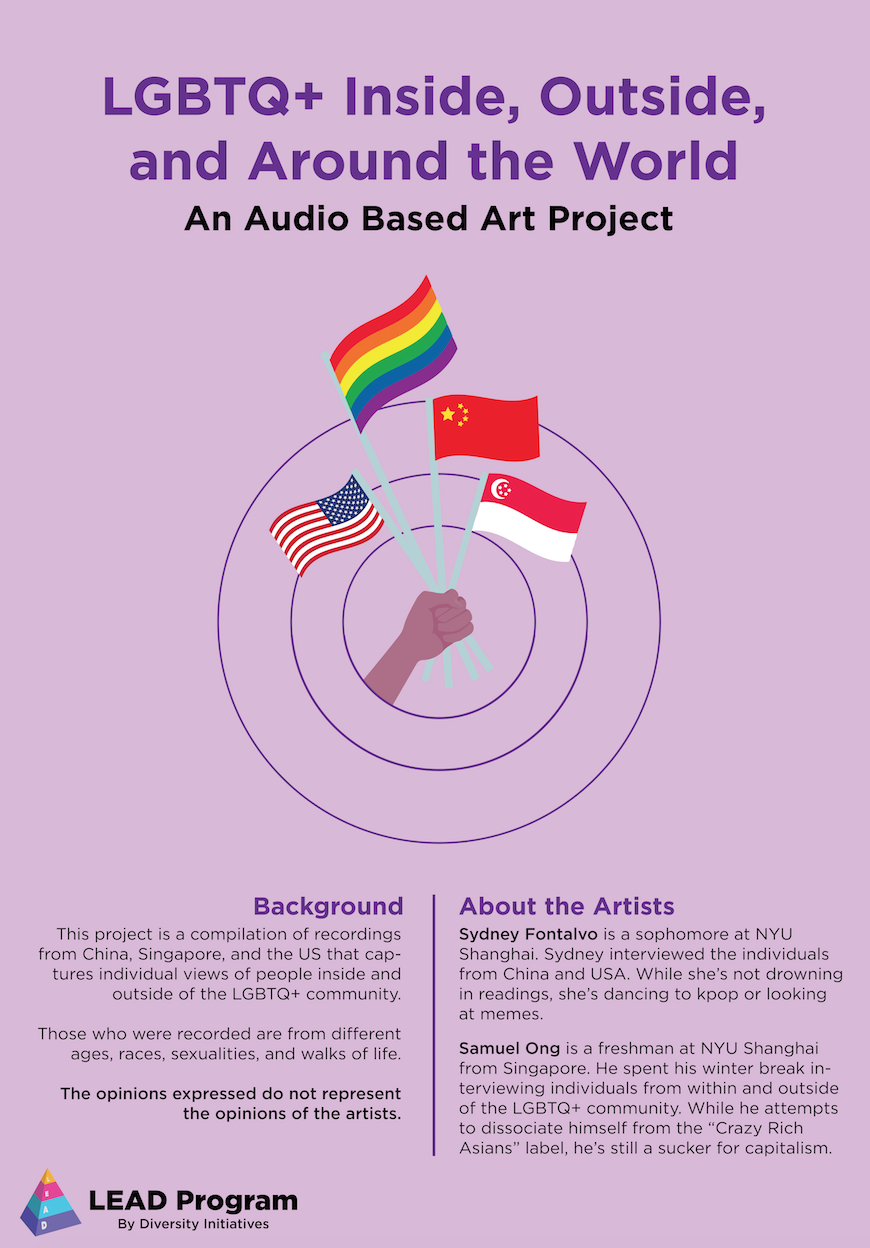 Why they chose this topic:

"We interviewed various individuals from different backgrounds along several dimensions, including sexuality, race, and age. They were from the US, Singapore and China specifically. We called our project LGBTQ+ Inside, Outside and Around the World because we wanted to get perspectives from inside and outside the LGBTQ+ community. We hope this project will start a dialogue between those two sides."

How Do You See Sound?

The Project: A visual piece with an intentionally muted soundtrack that advocates for closed captioning on video content at NYU Shanghai. 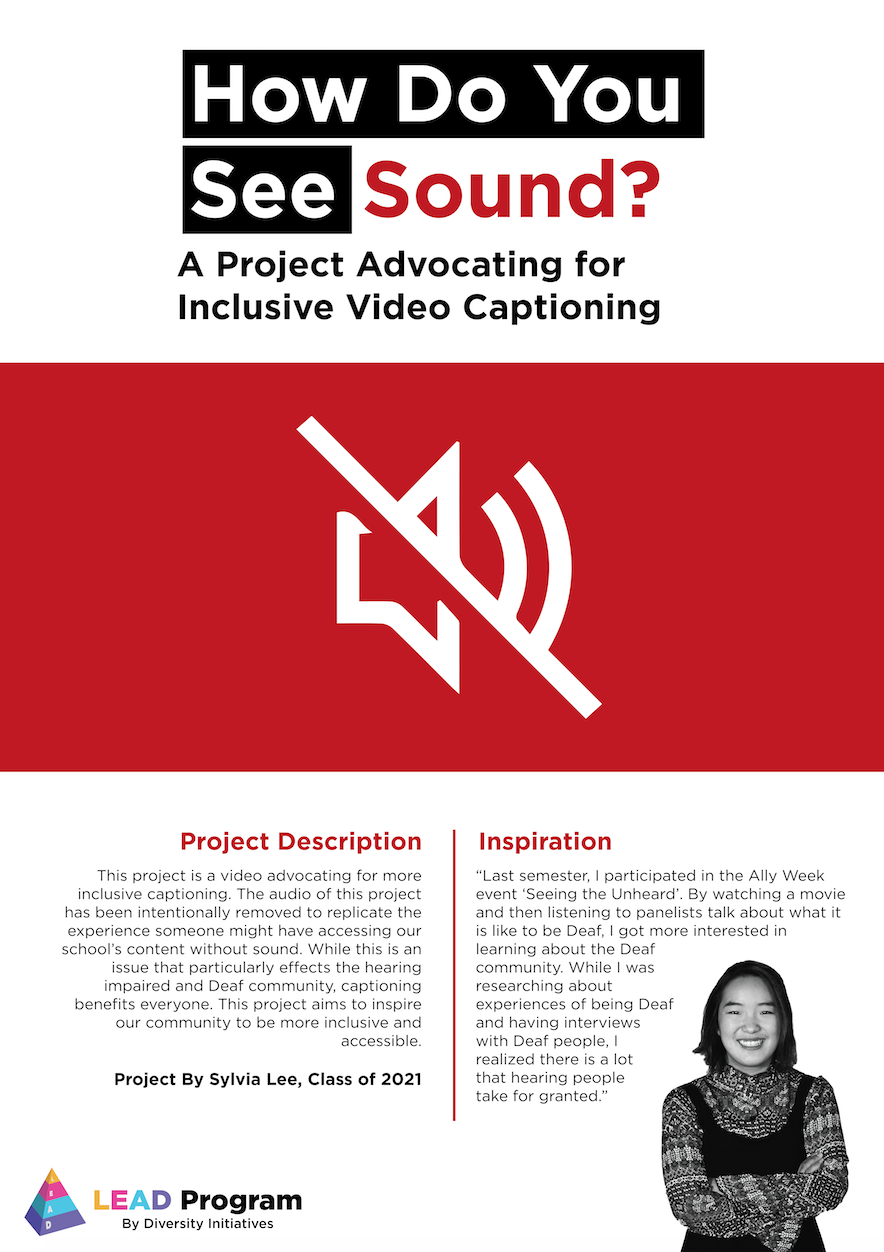 "When I looked into some of our school's video content, I realized not many of the videos had closed captioning. I wanted people to understand the experience and frustration of watching a captionless video for those who are from the deaf community, so I played some of the university’s videos without any sound. Every single person who watched my video project asked me where the sound was.”