Halloween might be over and the COVID case count in Shanghai may be low, but NYU Shanghai is determined to keep masks on.

Our Community Health Ambassadors can be found throughout the Academic Building and Go Local spaces, equipped with extra masks, pocket-sized hand sanitizers, immunity-boosting vitamin C tablets as well as health-related brochures and gently reminding classmates to mask up and keep distances.

The 30 Health Ambassadors were chosen from a pool of 125 applicants and represent a mix of grade levels, majors, and NYU home campuses.  “I think having peers in this role makes a big difference for students,” said the Student Health Center’s Carly Suita. “These students are a great source of feedback and creative problem solving for the Student Health Center team, helping identify challenges and thinking of how to support students in following the health guidelines.”

Meet some of the students who have made it their personal responsibility to help keep NYU Shanghai healthy together in a COVID-free environment fit for learning, working and living. 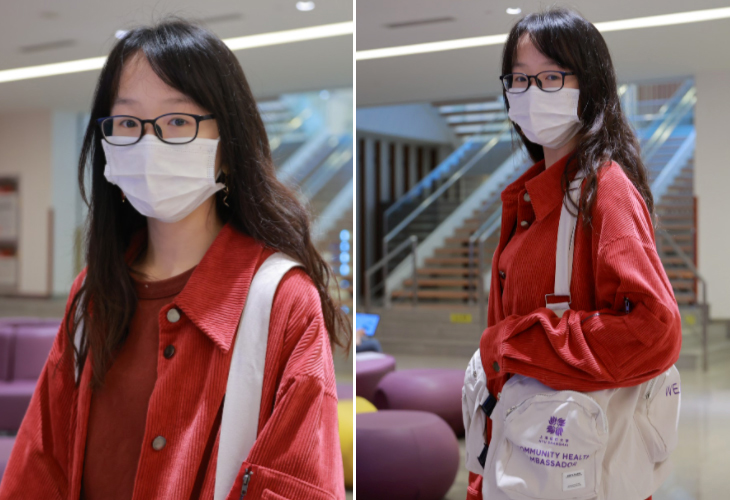 Victoria Xie '22, a business and finance major from Nanjing, China had previous experience working as both an Orientation Ambassador and Learning Assistant and applied for the Health Ambassador campus job to try something new. “I thought, hey this is good for the community and it’s an opportunity to earn some pocket money.”

Health Ambassadors are identifiable by their beige vests that read: “Keep Calm and Wear Your Mask” and are equipped with all the health-goodies they distribute on patrol. “Before, if we went up to students without wearing our vest, they would be a bit confused, wondering who we were, why we were there. When we wear the vests, they see us as a kind of reminder,” Xie says. 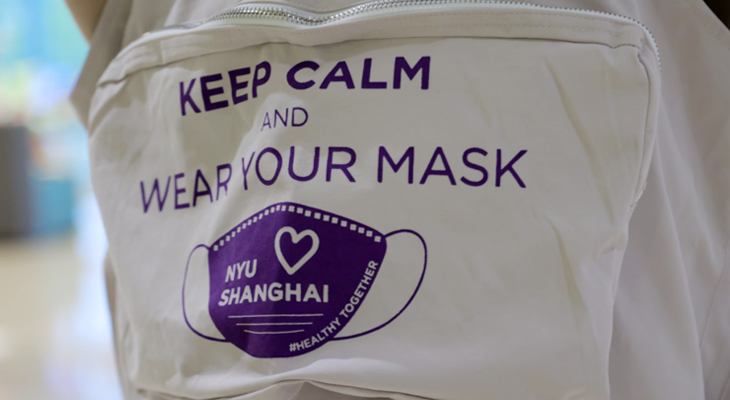 Students are growing accustomed to greeting Xie and fellow Health Ambassador Megan Feng ’22 on Tuesdays when they enter the NYU Shanghai’s cafeteria. During her shift, Xie also does a walk-through of the Leadership in Action Lounge to check on  mask compliance.

“Most people really show their support of us when we are distributing masks or giving them reminders,” Xie says. 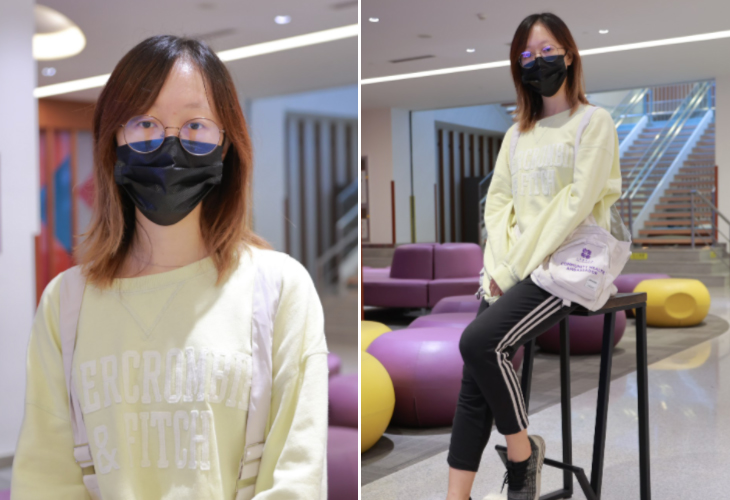 Shanghai-native Megan Feng, NYU ’22, a media, culture and communications major, felt a strong sense of social responsibility after her experience last semester studying away at NYU Prague and witnessing how some students kept traveling around Europe as the pandemic was worsening.

“I just felt like it was irresponsible on behalf of all of us in the cohort. We had a lot of Chinese students at NYU Prague last year, and people all knew how things had been going in China, so we were extremely worried about risky behavior,” says Feng. “This opportunity was a chance for me to take up my responsibility as an NYU student--to educate other people and to promote the right attitude towards this whole thing.”

Feng admitted to feeling a little bad about rousing mask-less students who dozed off on study-break naps in the Library. “The Library is generally a quiet place, and we hate to interrupt their studies...but it’s a very enclosed area so we need to do that.”

But one of the best things about applying for the job has been making friends from all over the global network. “It wasn’t something I was planning on, as a study-away student. I thought I would be only hanging out with my study-away friends, but it’s been a great opportunity to meet so many NYU students from other campuses. Now I know people from NYU Abu Dhabi, and on duty I became friends with Victoria, an NYU Shanghai student.” 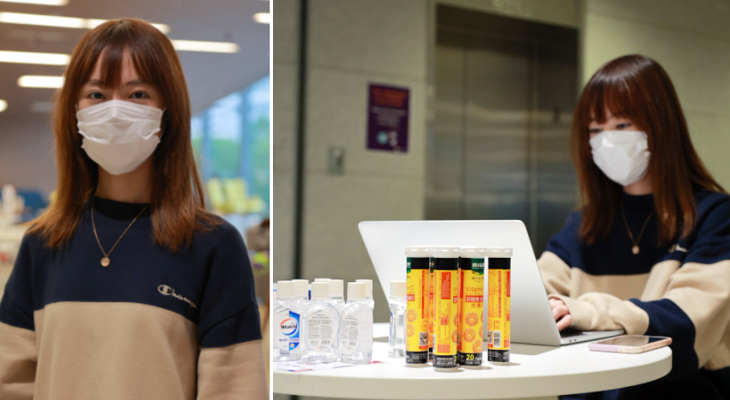 Stationed at a small round table between the 2nd floor cafe and elevators is Alina Yu Mi, NYU ’23, a media, culture and communications major. “When I was still in New York, I saw a lot of people refusing to wear masks and I wanted to warn them, but I didn’t know what my place was to warn them,” she says. After getting the job, Mi reports that she’s become more confident when walking right up to students in the cafe or Library who need a reminder.

“That’s actually another reason why I applied for this job,” she says. “I’ve always been a little shy and afraid to reach out to strangers, so I wanted to challenge myself. And even if I’m still shy, I’m much better than before. Maybe it’s because I’m wearing a mask, and nobody will know who I am!”

The Shanghai native feels responsible for protecting the city she calls home as well as her family living in it. “The health of all people in Shanghai really matters to me. We are on Century Avenue with many shopping malls and restaurants, so if our university did not take any measures to protect our community, it could be a potential disaster,” she says. “My family lives very close to this campus. I live with my grandma, so I really care about this, because I know COVID-19 can be very harmful for old people,” she says. “Public health is very important in my city and I want to make sure that our community is safe,” Bian says. “I give masks to those who don’t have one and also remind the ones who have them to wear them, if they’re not, but sometimes they don’t listen to me.”

Bian’s favorite part of the job is when students ask him for supplies when he makes his rounds. “It’s an important role because I’m there if students need help, and I want to help them stay safe during their stay in Shanghai. I think it's a very challenging but very rewarding job,” he says. 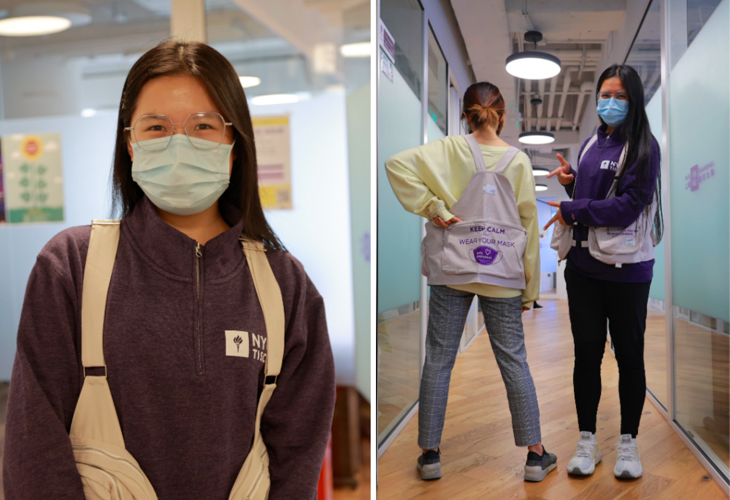 Ray Qian ’24 and Megan Feng ’22 sport their Health Ambassador vests in the halls of the 28F of NYU Shanghai’s temporary campus in Shinmay.

“I wanted to get involved. I wanted to find something to do in person here, otherwise I'd just have a one hour class here and then just go back home,” the Shanghai native said. After being hired, Qian was making new friends from other campuses and even reunited with a former high school classmate, Megan Feng, a fellow Health Ambassador who often would share the same work shift.

Qian says that being a Health Ambassador has helped them feel accountable for their own actions. “When I catch myself taking off my mask, I suddenly have a realization that as a Health Ambassador, I have to be a role model for other students, so then I put my mask on again.”

The job has also allowed them to explore their interests through volunteering at on-campus events. “Thanks to this job, I had a chance to volunteer for the Diversity in Action event held by NYU Shanghai. I was distributing masks, helping people scan their QR code at the entrance, and I was also able to enjoy listening to the presentations.”

“The Community Health Ambassadors are making an impact on campus as role models, and they remain very dedicated to their work,” says Suita. “They have also helped with some other health promotion projects including graphic design, making an HIV education video, and developing stress relief activities for finals time. I hope they take away a true sense of pride from this role for giving so much to our community, as well as increased confidence in their abilities to engage and impact others.”