As New York City’s hospitals fill with coronavirus patients and medical staff struggle with shortages of personal protective equipment, NYU’s Shanghai community has pulled together to support New Yorkers  in their fight against the pandemic, sending some 17,000 masks to NYU New York.

Last week, a group of NYU New York parents who are based in Shanghai purchased some 10,000 N95 masks to help protect medical workers on the frontlines of the fight against COVID-19 at NYU Langone Medical Center. NYU Shanghai, with the help of a school donor who paid shipping costs, arranged for those masks to be delivered to New York City. NYU Shanghai also shipped separately some 4,000 N95 masks from its own stockpile to colleagues in New York.

“Even if we are thousands of miles away, we still feel anxious and want to do something to help,” said one of the parent donors, who wished to remain anonymous. “As members of the NYU family, we hope that New York University will be alright, New York will be alright, and America will be alright.”

Vice Chancellor Lehman said he was moved by the parents’ generosity. “The bonds of affection between China and the US can produce tremendous benefits for the world,” he said. “We are proud of and grateful to these devoted members of the NYU community for stepping forward to help NYU Langone’s healthcare workers in this hour of need.”

Tuesday’s delivery was the latest in a series of protective equipment donations that has streamed across the Pacific from Shanghai. As the “hot zones” of the coronavirus pandemic have shifted away from China to New York and elsewhere, NYU Shanghai has drawn from its own resources to help fellow NYU Global Network members in Washington Square.

Over the past several weeks, in addition to the N95 masks, NYU Shanghai staff in Student Health, Finance, Public Safety, and the office of the Chancellor and Vice Chancellor have sent a combined total of 3,000 medical and disposable masks to colleagues at NYU New York. 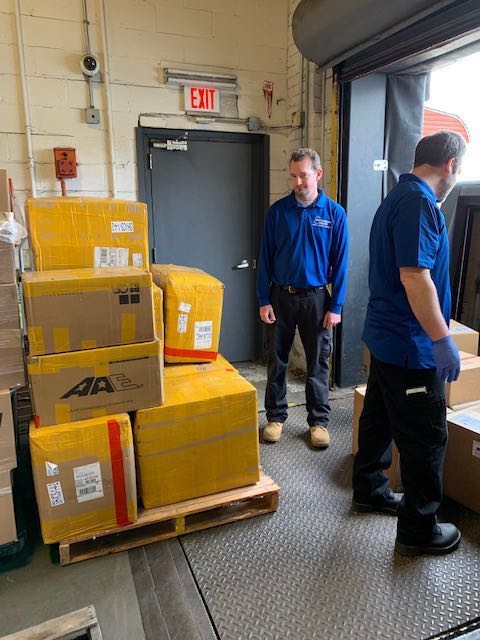 NYU Shanghai is paying forward the generosity that flowed to the campus during the height of the COVID-19 epidemic in China. The university received 850 disposable masks from NYU New York in early February, in addition to several hundred pairs of gloves, 20 protective suits, and thermometers. Corporate donors and NYU Shanghai faculty members also donated another 21,000 masks and other monitoring and protective equipment to the campus throughout February and March.  The community also came together quickly in the Light a Lantern project in February to raise more than U$50,000 to assist the people of Wuhan in their fight against the virus.