“Expect and welcome the unexpected,” Provost Joanna Waley-Cohen advised 455 new freshmen at NYU Shanghai’s welcome ceremony on August 25. “Because opportunities will come your way all the time, your interests will change, and, as they say, life sometimes intervenes.” 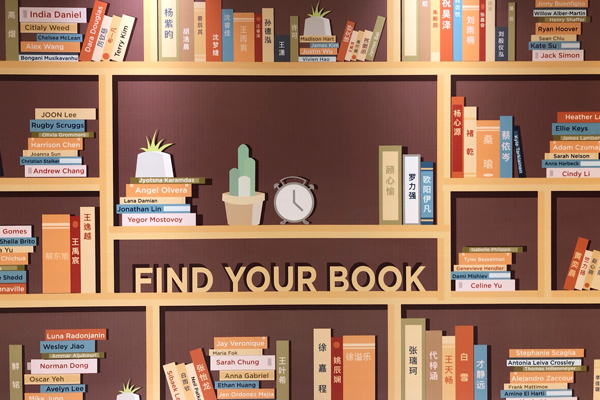 In a nod to the orientation week theme of 書, a wall of the campus was covered with a painting of a large bookshelf. Look closely and you’ll find that the book titles are the names of members of the Class of 2022. 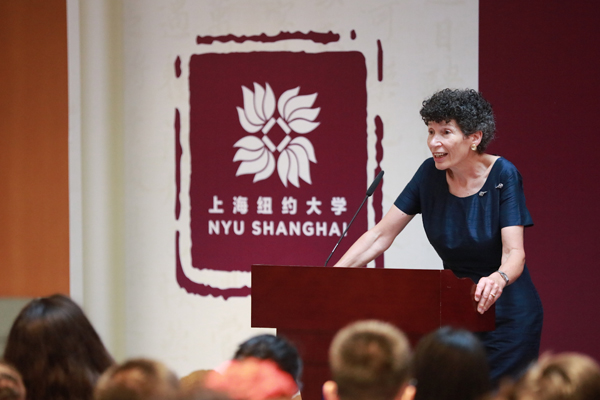 NYU Shanghai Provost Joanna Waley-Cohen addresses the 455 members of the Class of 2022.

Wearing identical violet NYU Shanghai t-shirts emblazoned with “Class of 2022” on the front, the class gathered in the campus academic building to meet each other and university leaders on their first full day as NYU Shanghai students. 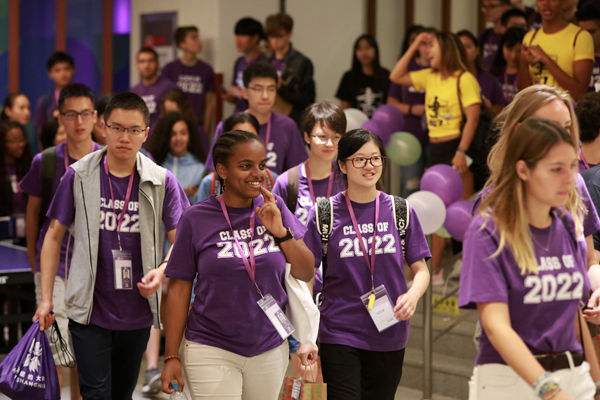 The Class of 2022 marched into the university welcome ceremony amid cheers from members of the NYU Shanghai community.

Freshmen in violet NYU Shanghai t-shirts talk to their classmates at the welcome event.

Chancellor Yu Lizhong, who had met many students and helped with their luggage at yesterday’s Move-In Day, reminded them of NYU Shanghai’s unique mission as the world's first Sino-American University.

"We are making history together," Chancellor Yu said.  "NYU Shanghai is the bond connecting different cultures...exploring the cooperation of different education systems" in an era of globalization.
He asked the students to seize every opportunity provided by the University that values academic freedom and freedom of choice—but to be prepared for hard work. 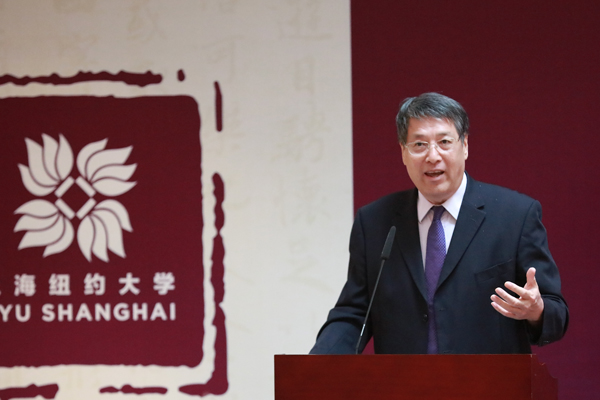 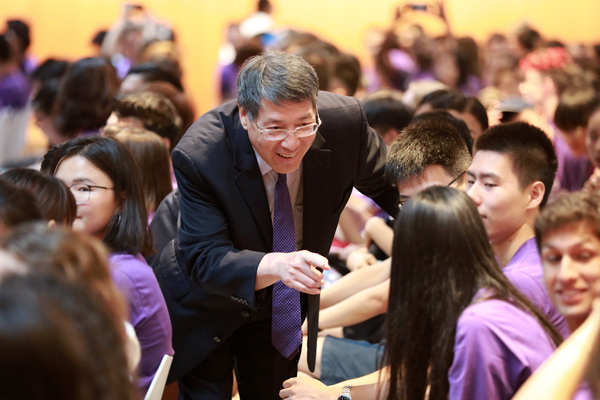 As they walked into the building, students found that the walls had been lined with a painting of a large bookshelf full of books with each student’s name printed on the spines. The bookshelf was designed to convey the  theme for this year’s Orientation Week: 書 (shū, which in Chinese means both books and calligraphy).  According to Chinese tradition, 書 represents one of the “Four Arts”—music, Chinese chess, books and calligraphy, and painting—that a scholar must master. 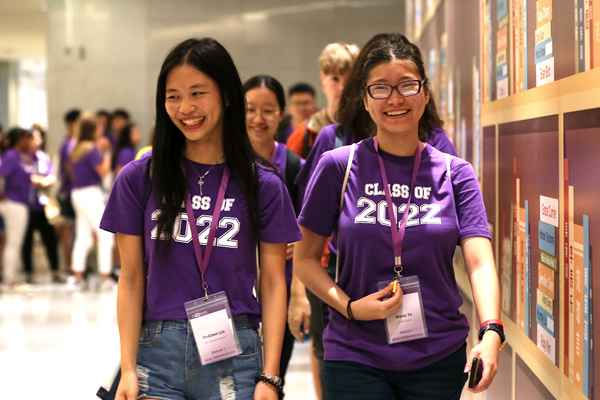 Freshmen line up beside the “bookshelf” as they prepare to enter the hall. 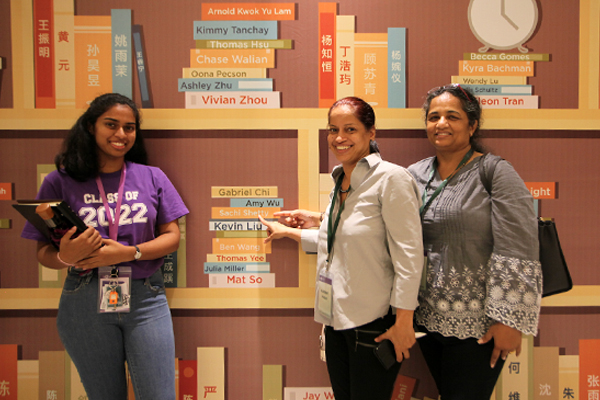 A freshman poses with her family after finding her name on the "bookshelf".

In his welcome remarks, Vice Chancellor Jeffrey Lehman offered two valuable tokens of advice on how to begin leading an extraordinary life: “Stretch yourself and respect each other,” he said. In his remarks to the new class, Vice Chancellor Jeffrey Lehman urged the freshmen to ”spend two hours a day, every day single day for the next four years... engaged in speaking a second language with someone from a different culture.”

“Stretching yourself will require you to leave your comfort zone and invest your energy in doing things that you don’t look out to do,” he explained. “For example, two hours a day, every single day for four years, stretch yourself to be engaged in speaking a second language with someone from a different culture.” 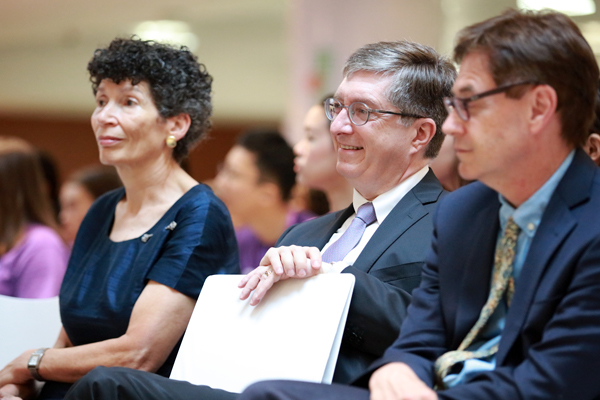 He asked the students to challenge forces that push people from mutual respect. “Truly respecting each other is not just refraining from bullying. It means imagining yourself in the shoes of everyone around you… treating people as an end, not as a means,” he said. 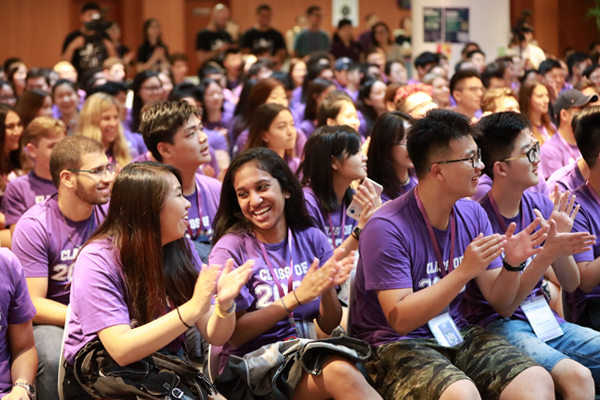 Freshmen enjoy a joke during the welcome ceremony.

Students in the audience said they were looking forward to the next four years. Phoebe Ruth Harmon '22 from Naperville, Illinois, said NYU Shanghai was the perfect environment for advancing her passions for Chinese culture and language and looks forward to majoring in Global China Studies.

“I'm really excited to continue to meet people from around the world who are excited to explore Shanghai and approach academics with a global mindset,” she said.

Jiang Wenye '22, a Shanghai native, said that she appreciates the English language study environment at NYU Shanghai and the University’s focus on liberal arts education. “I believe I will develop enormously over the upcoming four years, and  lay the foundation for graduate studies overseas,” she said. 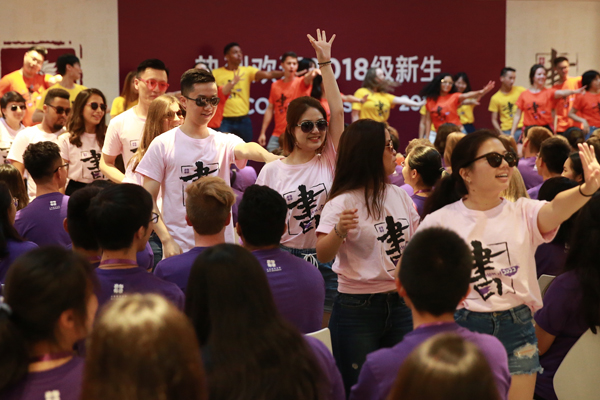 The orientation ambassadors pose for a group photo at the end of the welcome ceremony, as they kick off the week's activities.

The morning closed with a flash mob performance by the 37 upperclass student Orientation Ambassadors (OAs), who danced to a combination of Chinese and western pop songs, while parents of the Class of 2022 took part in a panel discussion and Q&A with upperclass students and university administrators on the fifteenth floor. 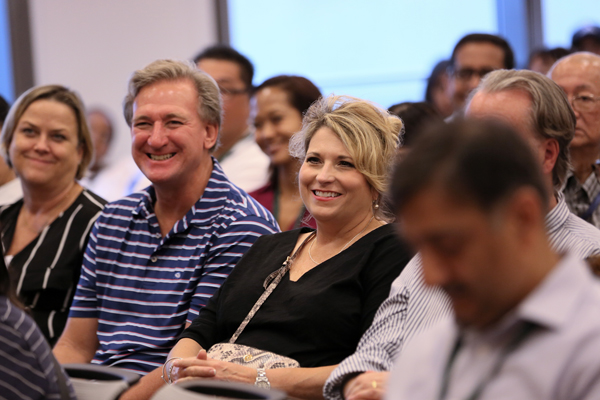 Parents of the Class of 2022 joined panel discussions and a Q&A with upperclass students and University administrators. ​

Following the University Welcome on Saturday, students can look forward to a full schedule of Orientation Week activities sponsored  by the Office of Student Life. The activities, which will take place both on and off campus, will help freshmen connect with classmates, faculty, and student leaders, meet with advisers, and register for classes.

A series of interactive workshops from the Academic Resource Center and the Library will also be incorporated, to provide hands-on instructions about utilizing intellectual and technological resources accessible to the entire NYU Shanghai community. 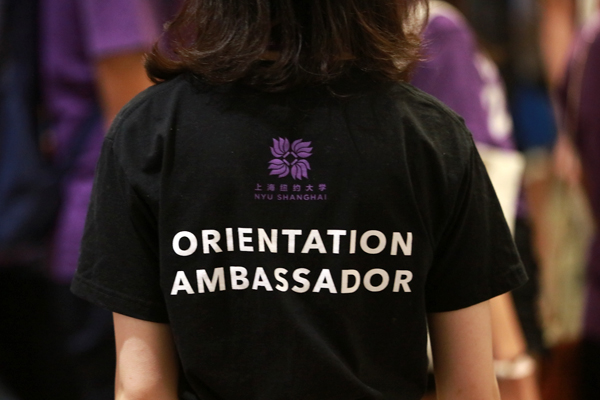 Freshmen will participate in a full week of orientation activities, coordinated by upperclass student volunteers. ​ 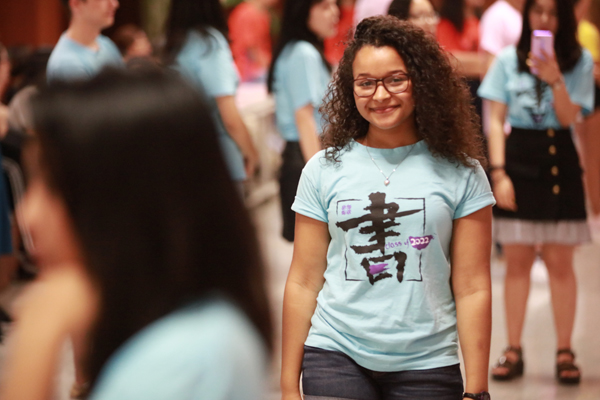 Nia Thomas ‘21 is one of 37 orientation ambassadors helping freshmen adjust to college life at NYU Shanghai. Check out the full schedule here

An NYU Shanghai tradition, the Fun Olympics have OA teams going head-to-head in "minute to win it" games, perfect for team-building and friendly competition to win prizes. Specific games include jump rope, a three-legged relay race, and other surprise games.