Lu Zhong-Lin, a leading scholar, vision scientist, and cognitive neuroscientist widely recognized for his work on computational brain models for perception and cognition, has been named Chief Scientist, Associate Provost for Sciences, and Co-Director of the NYU-ECNU Institute of Brain and Cognitive Science at NYU Shanghai, Provost Joanna Waley-Cohen announced today.

Lu joins NYU Shanghai this fall from Ohio State University, where he was a College of Arts and Sciences Distinguished Professor of Psychology, Professor of Psychology, Optometry, and Translational Data Analytics for eight years. Lu also served for many years as the Director of both the Center for Cognitive and Behavioral Brain Imaging and the Center for Cognitive and Brain Sciences at Ohio State.

“We are thrilled to welcome Lu Zhong-Lin to NYU Shanghai. His academic expertise and his experience in the world of research in both China and the US are an invaluable addition to our growing faculty strength. With Zhong-lin taking the lead as Chief Scientist and Associate Provost for the Sciences we expect NYU Shanghai to make ever greater contributions to scholarship in the sciences,” said Waley-Cohen. 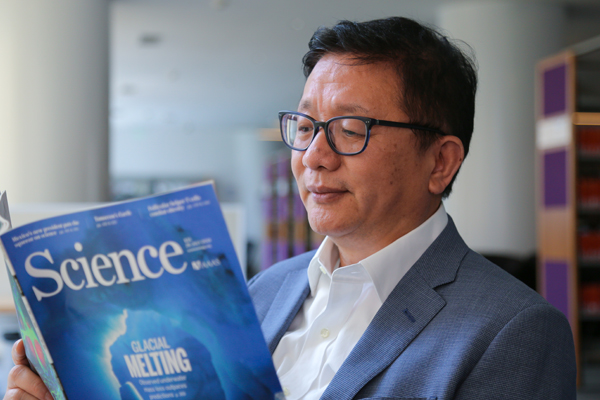 Lu, who earned his PhD from NYU in 1992, will assume his new duties as the Co-Director of the NYU-ECNU Institute of Brain and Cognitive Science at NYU Shanghai on September 1, 2019, succeeding Anthony Movshon, professor of Neural Science and Psychology at NYU, who is stepping down after two years in the post.

As the new Chief Scientist and Associate Provost for Sciences, Lu’s broad charge is to develop a strategic vision for NYU Shanghai to become an innovative world-class research university. He will help identify core areas of scientific research, foster multidisciplinary research programs, build strong partnerships between NYU Shanghai and the NYU global network, seek collaborative opportunities with academic, industry, and other partners, and nurture a collaborative scientific research environment.

“It’s exciting to return to China after spending three decades studying and teaching in the U.S.,” Lu said. “As an NYU alumnus, my relationship with the university dates back to my twenties. I am delighted to be part of the NYU Shanghai community and look forward to working with my colleagues to advance the shared mission and vision.”

“I will begin by engaging with our faculty at NYU Shanghai, NYU, and ECNU, and reaching out to the broad scientific community in China. I hope that we will be able to come up with a good plan through debates and discussions.” Lu said.

Over the course of his career, Lu has focused his research on computational brain models for perception and cognition. He deploys a rich set of experimental and theoretical approaches, such as psychophysical experimentation, physiological investigation, clinical testing, and computational modeling. In addition, his research spans a wide range of topics covering visual and auditory perception, attention, and perceptual learning; sensory and attentional processes, second language learning, memory, and human decision making; visual deficits in dyslexia, myopia, amblyopia & Alzheimer's disease, and brain imaging technologies and data analytics.

Lu has made ground-breaking scientific discoveries, and developed technological and analytical tools to solve real world problems. He has published more than 300 scientific papers in leading journals and collections, including Science, Nature, Nature Neuroscience, Proceedings of the National Academy of Science(PNAS), and has been cited more than 13,000 times. He has co-authored two books, edited 12 book volumes and received 12 patents in visual disease treatment, visual and cognitive assessment, and MRI (magnetic resonance imaging) technologies.

Lu is also an entrepreneur, co-founding Adaptive Sensory Technology, Inc., which is devoted to transforming eye care with precision measurement through adaptive vision tests for ophthalmology and optometry.

A Hubei native, Lu earned his bachelor's degree in theoretical physics from the University of Science and Technology of China in 1989, and obtained his M.S. and Ph.D. in physics in 1992 from NYU under the guidance of the renowned physicist Samuel J. Williamson. In 2003, he was the youngest fellow ever appointed by the Society of Experimental Psychologists, and was also a fellow of the Association for Psychological Science.

Early in his career, he spent four years as a postdoctoral fellow in Cognitive Science at the University of California, Irvine, working with the acclaimed cognitive psychologist George Sperling. After the fellowship, he joined the Department of Psychology at the University of Southern California as an Assistant Professor in 1996, rising to Professor of Psychology and Biomedical Engineering in 2005 and the William M. Keck Chair in Cognitive Neuroscience in 2006. Lu served as the Co-Director of the Dana and David Dornsife Cognitive Neuroscience Imaging Center at USC before joining Ohio State University in 2011.