Majestic mountain peaks and fantastical rock formations have featured prominently in art and myth for millennia as evidence of the mysterious natural forces that imperceptibly shape our world. But NYU Shanghai Assistant Professor of Mathematics Jinzi Mac Huang’s latest research – published this month as an Editor’s Suggestion in the premier physics letter journal Physical Review Letters (PRL) and featured in the American Physical Society’s Physics Magazine – is leading the world one step closer to solving that mystery, giving mathematical expression to both the precise evolution and shape of some of the world’s most eye-catching geological features.

Huang and the paper’s co-author, Nicholas J. Moore of the United States Naval Academy, have successfully found the analytic and exact form of the final shape of dissolving pinnacles that create “stone forest” karst formations, a rare achievement for complicated and nonlinear shape-evolution problems of this kind. Their work has resolved a long-standing controversy in the study of dissolution: Is there a limit to the sharpness of dissolving pinnacle structures? The answer is “yes.” No matter how sharp the structures appear to be, Huang and Moore’s study shows that the tips of their final shape are still curved upon scrutiny. 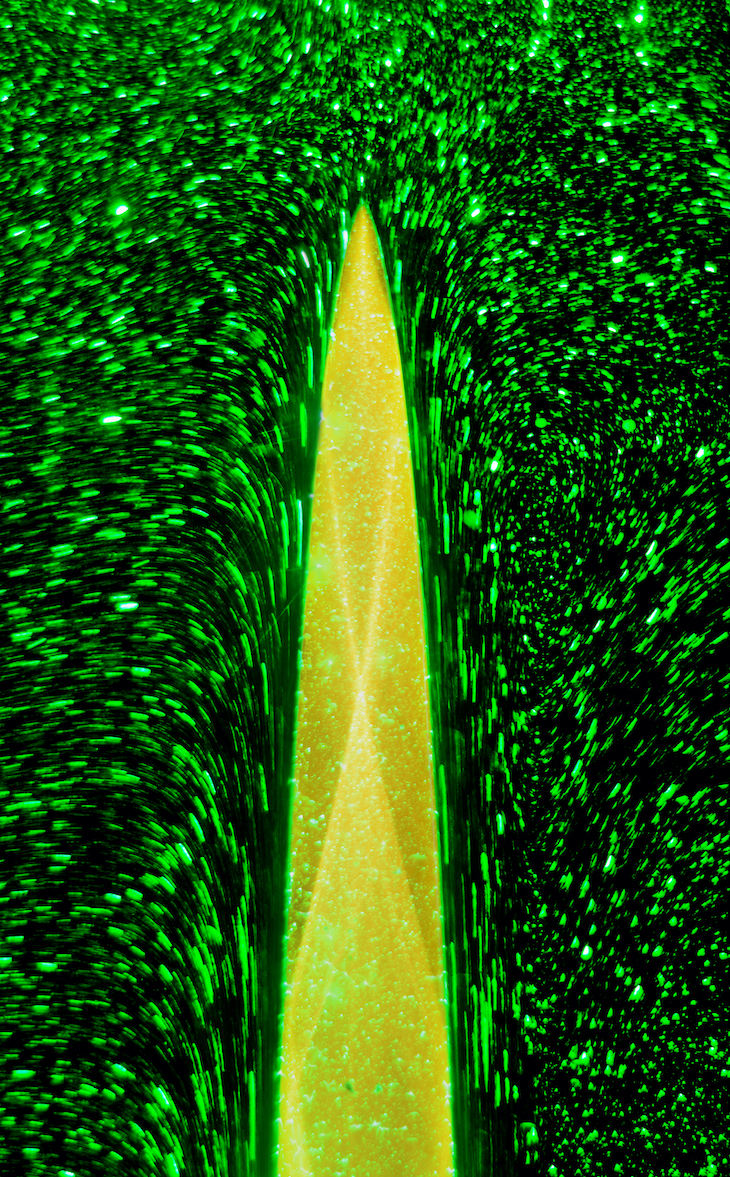 Huang and Moore first simulated the evolution process of karst stone pinnacles at lab-scale with candy to examine the dissolution process of soluble objects in fluid. Through repeated experiments and calculations, they were able to propose a mathematical framework to describe the exact shape evolution of dissolving objects. To ascertain the pinnacles’ final shape, the team creatively applied the method of characteristics in mathematics to calculate the tip curvature rate of the sharp dissolving structures in a precise way. In doing so, they successfully surmounted a hurdle faced by many other research teams in the study of pinnacle structures.

“The PRL study is a continuation of previous work, and it has benefited a lot from collaboration within the NYU Global Network,” said Huang, who began studying stone forests while working on his Ph.D. at NYU’s Courant Institute of Mathematical Sciences. Huang’s first paper on this topic was published in the journal Proceedings of the National Academy of Sciences in September 2020. The study replicated the formation of karst rock pinnacles in the lab using candy, revealing the mechanism through which flowing water carves the stones into pointed pillars. The new set of mathematical tools proposed by Huang and his colleague advance our   understanding of both the past and the future of natural geological structures. For example,  the proposed methods enable scientists to calculate both the age of karst pinnacles and the future evolution of their shape by calculating their height, width, and apex dissolution rates. “Our next step is to look into many other geomorphologies involving sharp features, for example, penitentes seen in the Andes Mountains, whose formation involves the sublimation of snow,” said Huang. The application of Huang and Moore’s new mathematical framework might help to better preserve “wonders in nature,” as we now have a better grasp of how factors such as climate change or industrial pollution could affect their evolution process.

The research was funded by a 2021 Shanghai Sailing Program grant from the Science and Technology Commission of Shanghai Municipality, the NYU-ECNU Institute of Physics at NYU Shanghai, and the U.S. National Science Foundation.