NYU-ECNU Institute of Mathematical Sciences at NYU Shanghai received a collection of sixty mathematical volumes published by the Institute Des Hautes Etudes Scientifiques (IHES). This was a gift made by Mrs. Regina Lanford, in remembrance of her late husband, Professor Oscar E. Lanford III, a renowned mathematician. This marks the first book donation to the Institute and to NYU Shanghai, a gift which will benefit the faculty and students for years to come.

Oscar E. Lanford III (January 6, 1940 -- November 16, 2013) was a distinguished American mathematician, working in the areas of Mathematical Physics and Dynamical Systems. After retiring from the Faculty of the Swiss Federal Institute of Technology in Zürich (ETHZ), he spent several semesters as a visiting scholar at the Courant Institute of Mathematical Sciences at NYU, where he taught and interacted with Professors Lai-Sang Young, Chuck Newman and other faculty.  In January, 2014, Oscar's widow, Regina Lanford, proposed that Oscar's collection of IHES publications be donated to the fledgling library of the new NYU-ECNU Institute of Mathematical Sciences at NYU Shanghai. Oscar had been a professor at IHES in Bures-sur-Yvette, France, before moving to ETHZ. This collection includes essentially all the IHES Publications Mathematiques from 1969 to 2000, covering all fields of mathematics. Some examples are a 1969 festschrift in honor of the renowned algebraist Oscar Zariski and a 1986 volume with a paper on ergodic theory by John Mather on the non-existence of invariant circles.

Professor Newman received that gift on behalf of the Institute. Newman fondly remembers Oscar as an academic brother since his graduate student days as they had the same Ph.D. advisor. Oscar was known for the exceptional clarity and precision of his seminars and course lectures. Newman recalls that one of the only research seminars he completely followed while a graduate student was presented by Oscar. The Institute is most fortunate to have received this founding donation for its library in memory of Oscar Lanford. 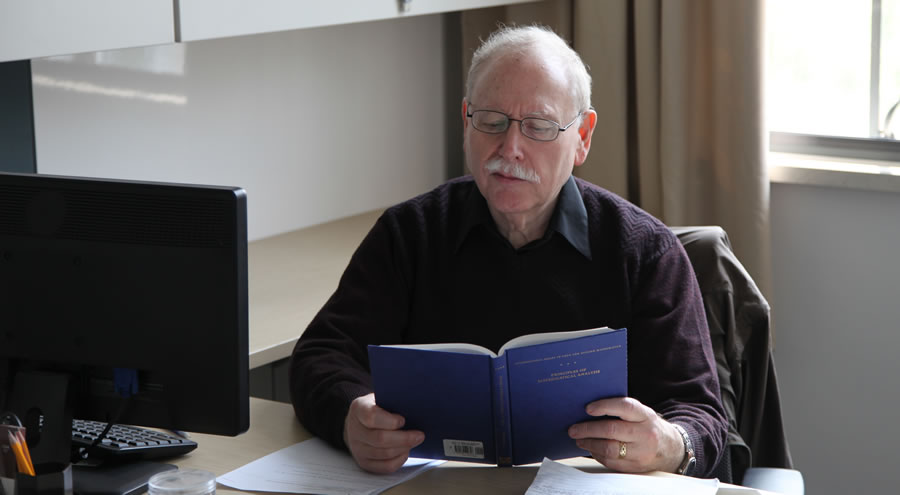 Professor Chuck Newman in his office at NYU Shanghai

Oscar E. Lanford III received his Ph.D. from Princeton University under the supervision of Arthur Wightman in 1966. He was a distinguished scientist working in Mathematical Physics and Dynamical Systems and was a Professor of Mathematics or Physics at three noted institutions in the U.S. and Europe: the University of California at Berkeley, the Institute Des Hautes Etudes Scientiques in Bures-sur-Yvette and the Swiss Federal Institute of Technology in Zürich. Some of his most influential research were his proof of existence for finite time of solutions of the Boltzmann Equation, the definition of Gibbs states by means of the DLR (Dobrushin-Lanford-Ruelle) equations and the computer-aided but rigorous proof of existence of solutions to the Feigenbaum equation in Chaos Theory.

NYU-ECNU Institute of Mathematical Sciences at NYU Shanghai is a research institute dedicated to developing a unique research and training environment to advance modern mathematics and their applications.

The Institute is in close partnership with NYU’s Courant Institute of Mathematical Sciences. Research work at the Institute will be patterned after the style of mathematics that has become the trademark of the Courant Institute - strong, dedicated and talented mathematicians working on problems of important scientific, technological, social or economic consequences, and developing mathematical and computational methods to contribute to their solution. The research interests at the Institute include: theories and applications of probability, nonlinear partial differential equations, fluid dynamics, biology, materials science, computational neuroscience, and mathematical finance.

The Institute will also serve to attract scientific and mathematics talent to NYU Shanghai.